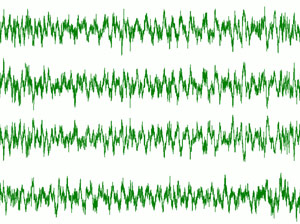 Abnormal activity: Brain signals that inhibit neuronal activity may be dampened in autism, which may explain the frequency of seizures in the disorder.

A popular unifying theory for what causes autism, first described in 2003, is that the disorder reflects an imbalance between excitation and inhibition in the brain, in particular in circuits governing sensory processes, memory, and social and emotional behaviors.

Various genetic and environmental factors may converge, in different combinations in different individuals, to produce a higher excitation/inhibition (E/I) ratio.

John Rubenstein and Michael Merzenich first described this theory in a paper published in Genes, Brain and Behavior in 20031. Since then, the paper’s theoretical framework for understanding autism has had a broad impact on the study of neurodevelopmental disorders, and a plethora of evidence has emerged to further substantiate the notion of E/I imbalance.

Rubenstein and Merzenich’s hypothesis grew in part from reports suggesting that many individuals with autism experience seizures and display ongoing ‘sharp spike’ activity during sleep2, 3, 4.

Like the seizures, this abnormality is indicative of increased excitability and noisy or unstable networks in the cerebral cortex, a brain region implicated in higher-order cognitive function.

From a systems level down to individual neuronal junctions and molecules, they provided the field with myriad examples of how an elevated E/I ratio might arise — and how this imbalance might lead to the brain dysfunctions or behavioral differences noted in autism.

Since their publication, data from numerous studies have strengthened the link between seizures and autism, suggesting that epilepsy and autism co-exist in up to 20 percent of children with either disorder5.

Also, molecular studies have bolstered the initial observation that certain markers of inhibitory signaling in the brain — mediated by the chemical messenger gamma-aminobutyric acid (GABA) — are diminished in individuals with autism.

Notably, levels of the enzymes that synthesize GABA and the cell-membrane receptors for GABA are lower in postmortem brain tissue from autism brains than in controls6, 7. Studies have also reported alterations in GABA signaling in numerous animal models of autism8.

Other molecular studies have substantiated the idea that genes implicated in autism regulate E/I balance.

For example, variations in the chromosomal regions bearing genes for GABA receptor subunits are linked to autism. The same is true for variants in genes controlling excitatory or inhibitory neuron development, migration, connectivity and signaling.

Some of these genes code for cell adhesion molecules that link synapses — neuronal junctions. Others code for proteins that regulate gene expression at the DNA and the protein level (both transcription and translation), enzymes and structural proteins.

Many of these other proteins are also present at synapses or may control their development and function. Often these molecules are part of signaling networks that are regulated by neuronal activity. The result is that mutations in these genes disrupt the process by which environmental experience modifies synapses9, 10, 11, 12.

In addition to describing molecular changes that might produce an elevated E/I ratio, Rubenstein and Merzenich discussed how environmental factors may lead to changes in brain wiring associated with hyperexcitability at the circuit level.

Hyperexcitability in basic sensory processing regions may explain the strong negative reactions that some individuals with autism have to mild sound, touch or visual stimuli.

Rubenstein and Merzenich highlighted ongoing experiments (since confirmed by others) in the rodent auditory system suggesting that abnormal sound experiences during critical periods of brain development can impair the formation of cortical sound maps. Typical sound maps are an orderly distribution of neurons that are evenly dedicated to different sound frequencies. Instead, the auditory cortex may over-represent certain sound frequencies at the expense of others13, 14, 15.

Because cortical circuits mature in a hierarchical fashion, defects in the wiring of primary sensory circuits may ultimately produce difficulties in higher-order brain functions, such as language and socialization.

In one of the earliest demonstrations of the importance of inhibition, cited in the 2003 paper, lowering inhibition in the young mouse brain prevents the visual circuits from properly adapting to experience. In that study, the researchers lowered inhibition by disrupting a key enzyme in GABA synthesis (one of the enzymes thought to be reduced in the brains of individuals with autism)16.

Plasticity, the ability to remodel neuronal connections based on experience, is needed to develop the neural architecture distinguishing left- versus right-eye inputs into the primary visual cortex and, ultimately, visual acuity. Strikingly, enhancing GABA transmission in these mice with drugs — presumably correcting the elevated E/I ratio — restores experience-dependent visual plasticity.

Local inhibitory neurons that secrete GABA play a crucial role in segregating minicolumns, the basic functional units of cortical architecture17, 18. Because of this, changes in the number, activity or structure of these interneurons may contribute to structural abnormalities in minicolumns. Rubenstein and Merzenich pointed out that minicolumns appear to be smaller and more numerous in individuals with autism19.

From cells to behavior:

In syndromic forms of autism, the mutation or loss of a single causative gene leads to the disorder. Mouse models of syndromic autism have been used to dissect the contributions of various brain regions and cell types to disease phenotypes.

Mouse studies of two such disorders, Rett syndrome and tuberous sclerosis complex, published in the past three years revealed that loss of the causative genes in GABA neurons alone can reproduce many of the neurobehavioral symptoms seen with a full deletion20, 21.

Studies have also explored the importance of different subtypes of GABA neurons in autism.

In 2009, a meta-analysis identified deficits in one particular subtype of GABA interneuron, parvalbumin-positive basket cells, in nine different mouse models of autism22. These cells drive gamma rhythms — which represent the synchronized activity of cortical neurons.

Electroencephalography studies have also shown that gamma oscillations are altered in individuals with autism23, 24, 25. Studies further suggest that these are the pivotal GABA cells responsible for orchestrating the timing of critical periods in which the brain undergoes development26, and that critical period plasticity is altered in mouse models of syndromic autism27.

Along these lines, critical period timing may be altered in humans with autism. Infants prenatally exposed to antidepressants — a population that may have a heightened risk of developing autism28 — exhibit an altered trajectory of speech perception. This suggests that higher-order critical periods underlying language development occur earlier in autism29. This is consistent with the altered cortical network function seen in rodents perinatally exposed to antidepressents30.

From a basic neurobiology standpoint, researchers have made significant advances since Rubenstein and Merzenich’s seminal paper toward understanding how inhibitory signals contribute to the function of individual neurons, circuits and networks in the cortex31. This in turn will enlighten us as to how a dysfunction or loss of inhibitory neurons might affect cortical activity in autism.

Conversely, with optogenetic experiments, which use light to turn on neural activity, scientists have shown that elevating the E/I ratio in the prefrontal cortex of mice leads to social deficits32.

As Rubenstein and Merzenich observed, the hypothesis of E/I imbalance gives hope that drugs correcting this balance may treat autism.

Researchers searching for strategies to target the E/I ratio in order to treat autism-like symptoms in mouse models must keep in mind that whereas there is ample evidence for elevated E/I in autism, there are also some cases where this ratio is decreased6, 7. What’s more, how these changes in the ratio develop over time is likely to be important.

The ultimate goal, already starting for some syndromic forms of autism, is to translate the circuit-balancing strategies in mice33, 34 into drug treatments for people35. Ideally, in combination with efforts to diagnose autism earlier, children could be treated while environmental experience has the most impact on sculpting their neural wiring.