In the late 1990s, while working to identify the gene that causes a neurodevelopmental condition known as double cortex syndrome, Christopher Walsh noticed something odd: The gene mutation he thought was responsible, which he had observed in two siblings with the condition, was also present in their unaffected mother.

“We didn’t know what to do with it,” says Walsh, chief of the division of genetics and genomics at Boston Children’s Hospital. “So we kind of ignored it.”

But when Walsh later noticed something similar in another family, he went looking for an explanation. Each mother, he soon discovered, was genetically ‘mosaic’ — meaning that some of her cells carried the same mutation as her children but others did not. At some point during each mother’s embryonic development, a cell had spontaneously developed the mutation and passed it down to her eggs, among other cells — so her children ended up with a mutated copy of the gene. But the mothers’ brain cells, which arose from a different developmental lineage, lacked the mutation.

Since that chance discovery more than two decades ago, Walsh has become a leading expert on mosaic mutations. He and other researchers have found evidence that a host of mosaic mutations play a role in autism and may even contribute to between 3 and 5 percent of all autism cases.

Despite the suspected prevalence of mosaic mutations, finding them has proved a technical challenge. “It’s easy to miss mosaic variants, and it’s also easy to find candidates that are not really true [mosaics],” says Jonathan Pevsner, chief of the genomics research branch at the National Institutes of Mental Health.

In 2016, the National Institutes of Health convened a group called the Brain Somatic Mosaicism Network (BSMN), to which Pevsner and his lab belonged, to study mosaicism in neuropsychiatric and neurodevelopmental conditions and to standardize procedures for doing so. To optimize their processes, the BSMN teams worked independently to identify mosaic mutations in a single sample of brain tissue.

“Initially, there were all kinds of differences — everybody found different things,” says Flora Vaccarino, professor of neuroscience at Yale University, whose lab was also a member of the network. “This is how difficult it is.” But through collaboration, the network determined a set of best practices, which it published in March.

As the tools to identify mosaic mutations improve, researchers hope to gain a better understanding of how they contribute to autism. So far, the research suggests that in many cases mosaic mutations aren’t all that different from ‘germline’ mutations, which are present in all of a person’s cells. But they do occasionally have unexpected effects, and studying those cases could lead to a more nuanced picture of autism’s genetic underpinnings.

Mosaicism is by no means a novel idea in genetics, says Anne Goriely, associate professor of human genetics at the University of Oxford in the United Kingdom. The influential geneticist Thomas Hunt Morgan described flies with mosaic features — a mix of male and female sex characteristics — more than 100 years ago.

In humans, mosaicism is most apparent in the skin, where striped and mottled discolorations can mark areas of skin derived from a single mutated embryonic cell. The developmental history of people with these skin patterns is literally written on their bodies.

After his initial chance discovery in double cortex syndrome, Walsh focused on the neurological equivalent of these skin conditions: focal cortical dysplasia, a form of epilepsy caused by small brain lesions that are easy to spot on a brain scan. Demonstrating that these epilepsies result from mosaic mutations was relatively straightforward: “The surgeons conveniently remove [the lesion] and put it in your hands,” Walsh says. Sequencing the genomes of that tissue revealed how it differed from the rest of the body’s cells.

But it has proved much more complicated to identify mosaic mutations in autism. Walsh was inspired to seek out such mutations from his work on focal cortical dysplasia, based on the theory that a mutation in one part of the brain and not another might help explain an autistic person’s mix of traits — difficulties with social skills but strengths in other areas. “We thought, ‘Well, golly, maybe the same kind of thing happens in autism,’” he says.

In theory, scientists can readily spot mosaic mutations in sequencing data using a measure called an ‘allele fraction.’ A mutation that affects one copy of a gene in all cells throughout the body has an allele fraction of 50 percent. Anything less than that indicates a mosaic mutation; the lower the allele fraction, the fewer cells a mutation affects. But therein lies the challenge: Mutations that appear in few cells have such small allele fractions that they can be hard to distinguish from random noise in the data.

But over the past 20 years, she says, those costs have dropped 100-fold. As a result, Walsh and others have been able to seek out mosaic mutations in blood samples from autistic people and their non-autistic relatives.

Mosaic cells, though, aren’t spread evenly across the body. So a mutation that’s absent in the blood could still be present in the brain. “The disadvantage of studying blood is you can only identify mutations that occur over the first dozen or so cell divisions [in an embryo],” Walsh says, “because after that, blood and brain become separate. And so we don’t know how many mutations are hiding in the brain.”

So he and his colleagues have also turned to postmortem brain tissue in search of mosaic mutations in autism. Here the challenge is that these samples are in short supply. Among samples from more than 50 autistic people, they found some interesting cases — including a mutation in the autism-linked gene CACNA1A in 10 percent of one person’s brain cells. But because the number of samples was so small, it was impossible to ascertain the extent to which any of the mosaic mutations they found had actually contributed to autism. 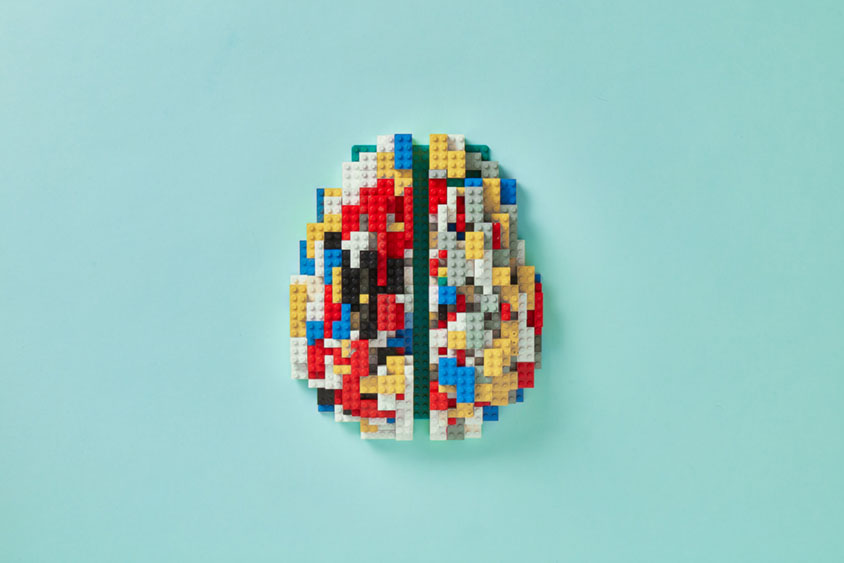 The hunt for mosaic mutations may seem like a thankless pursuit — they can be tough to find and likely contribute to only a small fraction of autism cases. But “studying mosaicism is part of a systematic effort to understand possible causes of [phenotypic] variation,” Pevsner says.

And when the team focused on copy number variations — mutations in which a substantial chunk of a chromosome is duplicated or deleted — they again found previously unknown variants in people with autism. But surprisingly, mosaic mutations in autism-linked copy number variants, such as 16p11.2, appeared only in non-autistic people. “There’s almost non-overlapping mutations that give you mosaic autism, as opposed to germline autism, when we’re talking about copy number variants,” Walsh says.

Looking more closely at the SMARCA4 mutations, Walsh and his colleagues noted that the mutations were ‘missense mutations,’ or single DNA ‘letter’ swaps that cause potentially significant deviations in a gene’s protein. These missense mutations seem to downregulate another autism-linked gene, GRIN2B.

Studying mosaic mutations could help scientists find more missense mutations in autism, says Elaine Lim, assistant professor of molecular, cellular and cancer biology at the University of Massachusetts, who was a postdoc in Walsh’s lab. Researchers may miss mosaic missense mutations that cause a protein to function better or in a new way, she says. But some missense mosaic mutations might, for example, cause cells to proliferate, which would give those mutations a higher allele fraction — making them easier to discover.

In other cases, finding mosaic mutations in autistic people could help researchers spot genes not previously observed to carry mutations, says August Yue Huang, instructor in pediatrics at Harvard Medical School. “Some of the genes may be too important,” Huang says. “So the human body cannot tolerate [a] germline mutation” that affects all the body’s cells. But if only some cells are affected, the person who carries that mutation may be able to survive — and scientists may then be able to identify the gene.

This situation explains some rare cases of males who have Rett syndrome — a condition that’s almost exclusively found in females. The mutations responsible, in a gene on the X chromosome, are fatal without additional, unmutated versions of the gene. Females have a second copy of the X chromosome and so have a backup copy of the gene; males with mosaic mutations can also survive because of the healthy X chromosomes still present in some of their cells.

Occasionally, mosaic mutations can have completely unexpected effects. For instance, cells recognize each other during development based on their version of the X-linked gene PCDH19. If all cells carry the same version, whether mutated or not, brain development proceeds as usual. But with a PCDH19 mosaic mutation, developing cells can’t properly recognize one another, which ultimately results in epilepsy.

A similar mixing of mutated and unmutated cells could contribute to autism, Walsh says, though he hasn’t found evidence of it so far. “Some of these mosaic things may also cause mischief just because of the fact that the cells are not equivalent,” he says. “But we don’t know that for sure.”

Though mosaic mutations in autistic people remain mysterious, their presence in unaffected parents has already made its way into the clinic. Like the mother who initially inspired Walsh, some parents of children with syndromic forms of autism — those caused by single-gene mutations — are mosaic for those same genes. If the mutation spares some parts of their body, including the brain, but affects their sperm or eggs, they may unknowingly pass it on to their children.

Knowing about a parent’s mosaic mutation can influence genetic counseling and family planning. For example, most cases of Rett syndrome are caused by de novo mutations, which arise spontaneously in individual sperm or egg cells, or after fertilization. In such cases, parents are extremely unlikely to have other children with the same condition. But if one of the parents is in fact mosaic for that mutation and has a child who inherited the mutation, future children are far more likely to have the same condition. “The risk [of recurrence] is either nothing or extremely high,” Goriely says.

As groups like the teams that made up the Brain Somatic Mosaicism Network hone their techniques, scientists may begin to clarify how mosaic mutations contribute to autism. Cheaper sequencing means scientists can find rarer and rarer mutations; new single-cell techniques let scientists examine the relationship between mosaic mutations and gene expression; and researchers may have found a way to overcome the limitations of brain samples by using cerebrospinal fluid to identify brain mosaic mutations, which they have managed to do in a few living people with epilepsy.