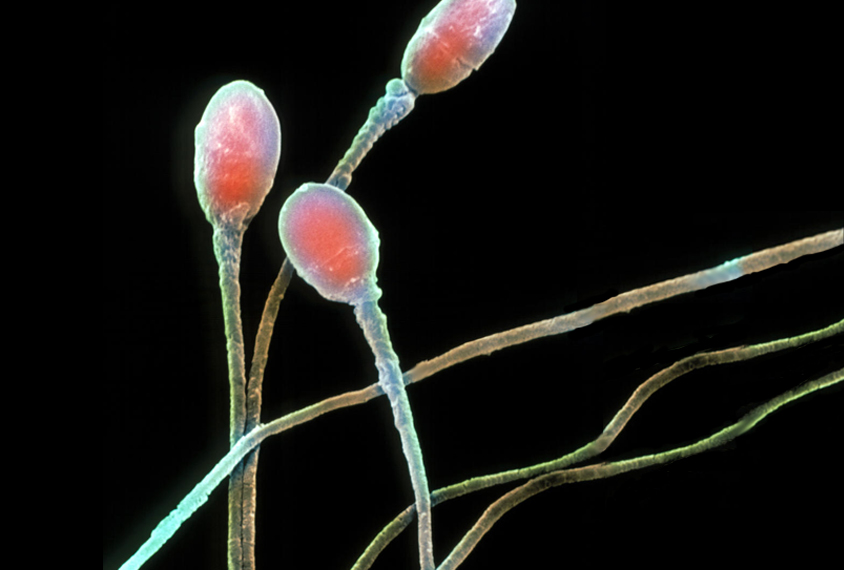 Fatherly finding: Looking for Rett syndrome mutations in sperm may be more informative than analyzing blood.

Nearly one in four men who have a daughter with Rett syndrome carry mutations linked to the condition in some of their sperm, a new study suggests1.

The findings, based on an analysis of data from 21 families, challenge the idea that Rett syndrome is rarely inherited.

The study also reveals that in about 1 percent of people with Rett syndrome — and especially in boys — mutations in MECP2, the gene affected in the syndrome, occur in a so-called mosaic pattern, affecting only a fraction of the body’s cells. The findings add to mounting evidence that mosaic mutations contribute to autism risk.

Infants with Rett syndrome, a condition related to autism, progressively lose the ability to coordinate their movements and communicate. Almost all cases stem from a mutation in a copy of MECP2, which is on the X chromosome. The syndrome primarily affects girls, who have two X chromosomes and can compensate for a mutated copy; boys, who have only one X chromosome, typically die early.

The blood of parents of children with Rett typically does not show evidence of the mutations, so researchers believed that the syndrome arises spontaneously, or ‘de novo,’ around the time of conception.

The new results suggest that at least in some cases, the syndrome originates in the father’s sperm.

“Mutations in parental germline cells may be the origin of the ‘de novo’ mutations in some Rett patients,” says co-lead investigator Liping Wei, professor of bioinformatics at Peking University in Beijing, China.

The findings suggest that doctors should test the sperm of men who have a child with Rett to assess risk for future children.

“We typically look at saliva or blood from the parent, but mostly it’s not the right tissue,” says Anne Goriely, associate professor of human genetics at the University of Oxford in the United Kingdom, who was not involved in the study. “What you want to look at are the gametes of the parents, because that’s where the child came from.”

Wei and her colleagues analyzed MECP2 and two other genes linked to Rett in children who have either the syndrome or some features of it. (Rett is typically diagnosed by the presence of these features rather than by genetic analysis.) They looked at blood samples from 453 girls and 18 boys; they detected harmful mutations in 324 of the children.

They then searched for these mutations in the blood of 74 of these children’s fathers, because about 95 percent of MECP2 mutations are known to be on the paternal copy of the gene2.

They used a highly sensitive sequencing technique to scour the fathers’ DNA for mosaic mutations. Mosaic mutations happen after conception; the later they occur, the smaller the proportion of cells they affect — and the harder to detect.

However, they did not find the mutations in blood samples from any of the fathers.

But when they analyzed sperm from 21 of the men, mosaic mutations turned up in 5 of the fathers. The proportion of sperm cells that are affected ranges from 0.03 percent to 7.55 percent. The work appeared in November in Genetics in Medicine.

This rate of sperm mosaic mutation aligns with that observed in an unpublished study of men who have a child with autism, notes Jonathan Sebat, chief of the Beyster Center for Molecular Genomics of Neuropsychiatric Diseases at the University of California, San Diego. (Sebat’s team presented that study at the 2018 American Society of Human Genetics meeting.)

These emerging results suggest that looking for mutations in the blood is not enough, the researchers say.

Children with mosaic mutations tend to have milder traits than those who carry the mutation in the whole body, the researchers found. “Undetected mosaic mutations may explain some of the unexplained cases of Rett syndrome and Rett-like symptoms,” Wei says.

The next step, Yang says, is to figure out why MECP2 in sperm is prone to mutation.