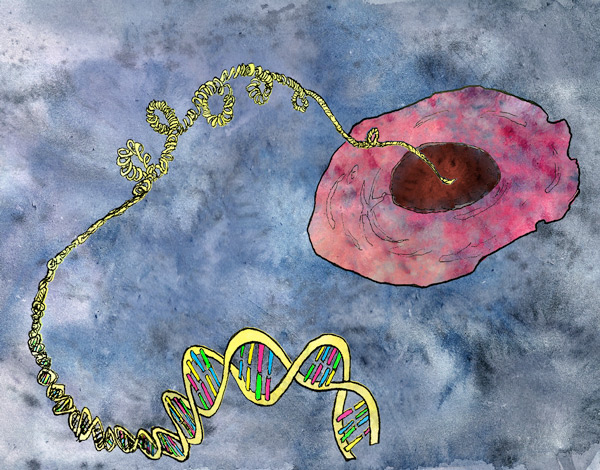 Vin Ganapathy Finding flaws: One approach to discovering mutations that occur in only a subset of the body’s cells involves sequencing the DNA of a single cell.

Advanced sequencing methods can detect spontaneous genetic changes that show up in only a small subset of a person’s cells, suggest two new studies published in August. Despite their low prevalence in the body, these so-called ‘somatic mosaic mutations’ occur frequently in people and may be important contributors to brain disorders.

One of the studies, published 21 August in the New England Journal of Medicine, looked at genes in blood cells from 158 people with brain malformations1. Using a highly sensitive next-generation sequencing method, the researchers were able to detect mutations present in only a small fraction of the blood cells in each sample. The study also revealed that conventional sequencing methods miss many of these mutations.

In the second study, published 21 August in Cell Reports, researchers sequenced the entire genomes of a total of 161 neurons from five postmortem brains2. The samples were from three typical adults, a fetus with an extra copy of chromosome 18 and a child with a brain malformation.

The analysis revealed that only a few of the neurons have extra or missing chromosomes, but some cells harbor large deletions or duplications, known as copy number variations (CNVs), of chromosomal regions. Two pairs of the neurons each share an identical CNV, suggesting that the mutations occurred early in brain development and may have been present in enough cells to cause the disorder.

The findings add to the growing recognition of genomic variation even among the cells of a single individual. Numerous somatic mutations have been linked to autism and other brain disorders, but researchers may have overlooked mutations present in only a subset of cells.

“Somatic mutations are surprisingly common, and we’re only really beginning to grasp their significance now that we have methods to be able to study them,” says Christopher Walsh, professor of neurology and pediatrics at Harvard Medical School, who led both studies.

The studies also illustrate that careful experimental design and advanced sequencing techniques may be needed to detect these variations.

“Currently, when we do genetic testing, we usually test the blood,” says James Lupski, professor of molecular and human genetics at Baylor College of Medicine in Houston, Texas, who wasn’t involved in either study. But it takes deeper, more comprehensive sequencing to uncover mosaicisms in the blood, and researchers need to consider the possibility that mutations in the blood may be different from those in the brain, he says.

Somatic mosaic mutations can occur anytime after conception. The earlier the mutation occurs, the more likely it is that it will be present in a large proportion of the individual’s cells.

Walsh’s team and others have previously linked somatic mosaic mutations to a brain malformation known as hemimegalencephaly, in which one side of the brain is enlarged3, 4. In those studies, researchers found mosaic mutations in the enlarged part of the brain, but not in the unaffected side. In some cases, they were also able to detect the mutations in blood, which is easier to obtain for genetic analysis.

In the first new study, Walsh’s team looked for somatic mosaic mutations in the blood of people with other types of brain malformations. The researchers used a targeted, deep-sequencing approach that focused on 68 genes known or suspected to cause the malformations. They sequenced each gene at least 200 times so that they could confidently distinguish real mutations from sequencing errors.

The researchers found 57 spontaneous, protein-altering mutations in 50 participants, 8 of whom have a somatic mosaic mutation. They could not detect five of the somatic mutations using an older sequencing technique known as Sanger sequencing, a common diagnostic method in clinics. Corroborating that finding, one participant had had all of his genes sequenced before, but that had not identified his mutation.

“I think they make a nice point,” says Brian O’Roak, assistant professor of molecular and medical genetics at Oregon Health and Science University, who was not involved in either study. “Now that we have the technology to actually find these things, it’s an open question of how frequently they’re going to be involved with developmental disorders.”

In the Cell Reports paper, Walsh’s team tried to get a handle on the prevalence of somatic mutations in the brain. Their analysis of 161 neurons revealed an abnormal chromosomal number in cells from the fetal brain, as expected, but not in most cells from the normal adult brains.

The researchers then took a closer look at 19 neurons from a normal brain, searching for large CNVs spanning one million base pairs or more. Most of the cells, about 70 percent, turned out to contain CNVs.

All except two of the CNVs are unique to each cell. Because most brain cells do not divide after they have formed, the finding suggests that those two CNVs arose early in brain development. The presence of more than one cell with the same mutation increases the likelihood the mutation will have a discernible effect, Walsh says.

The findings are largely in agreement with a 2013 study that sequenced single neurons and also found that mosaic CNVs are abundant in human neurons5. “That is really nice to see, because [single-cell sequencing] is so new, and it’s so difficult,” says Ira Hall, associate professor of medicine at Washington University School of Medicine, who worked on that study.

But the total number of neurons analyzed in either of the two single-cell sequencing studies represents a miniscule fraction of the billions of neurons present in an adult human brain. “What is the frequency of most mutations? Do they arise early or do they arise very late?” Hall asks. “The landscape is very murky, but this gives a hint that some of them are going to be developmental mutations that have the potential to have phenotypic effects.”

Taken together, the new studies may have implications for autism and other neurodevelopmental disorders. Somatic mosaic mutations have been identified in genes that cause syndromes related to autism, including tuberous sclerosis and Rett syndrome6. Spontaneous, or de novo, mutations are also known to be elevated in people with autism.

“A large number of somatic mutations have been described in a single patient here or there, in a large number of autism risk genes,” Walsh says. “But what we don’t know is how common they are as a cause of autism.”