Inside scientists’ quest to map, modulate social circuits in autism 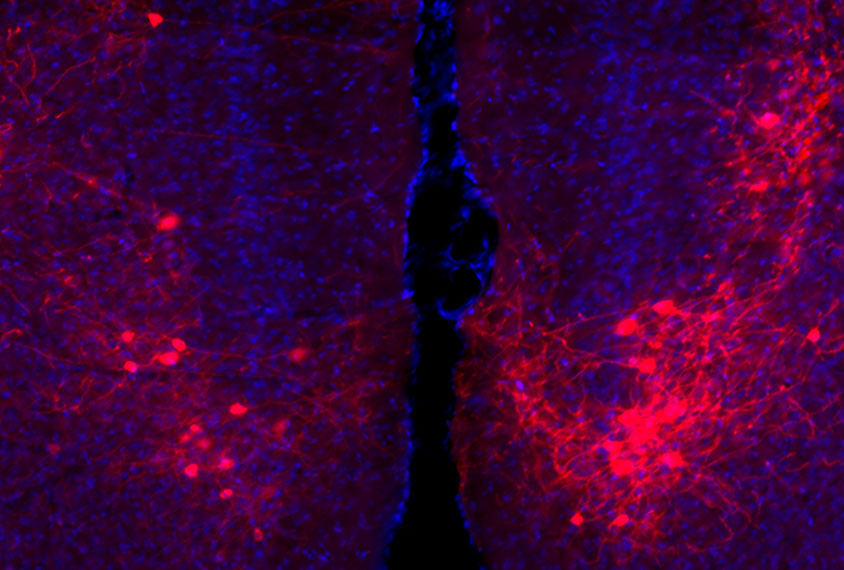 Short circuit: Stimulation of neurons that extend from the prefrontal cortex to the amygdala (pink) causes social problems in mice.

One of the biggest mysteries in autism research is understanding how the condition’s discrete set of traits emerges from a multitude of genetic and environmental factors. Over the past decade, scientists have homed in on a possible explanation: Autism’s diverse influences may all affect the same neural circuits, or networks of neurons that work in concert.

Researchers are gradually building a ‘road map’ of the neural circuits relevant to autism, charting key pathways that connect autism-linked brain regions, including the amygdala, prefrontal cortex and cerebellum. In particular, a growing number of studies have revealed circuits that underpin social problems in mouse models of the condition.

“Really the goal is: Can we think about understanding the circuit to actually benefit people with [autism]?” says Peter Tsai, assistant professor of neurology at the University of Texas Southwestern in Dallas.

Treatments that alter activity in other neural circuits, such as those governing movement, already exist for Parkinson’s disease and other neurological conditions1. Mapping the social circuits altered in autism mouse models may provide a similar avenue for therapy in autistic people, says Erik Carlson, assistant professor of psychiatry at the University of Washington in Seattle.

“As we get a picture of what the circuits are, and potentially how to target them and modulate them, I definitely think [manipulating circuits] is an avenue that is promising,” he says.

One possibility, Tsai says, is building on the knowledge researchers have gained using techniques such as optogenetics and chemogenetics, which use light and chemicals, respectively, to toggle neural circuit activity in mice.

Tsai and his colleagues have focused on a neural circuit connecting the cerebellum to the medial prefrontal cortex2. Both regions are implicated in autism traits, such as having difficulty making predictions in social situations and problems with higher-order cognitive functions such as planning.

Tsai’s team studied mice with mutations in a gene called TSC1, which in people can lead to a condition called tuberous sclerosis, characterized by epileptic seizures, benign tumors and, in about 40 to 50 percent of cases, autism.

Previously they mutated the gene in cerebellar neurons known as Purkinje cells, dampening the cells’ activity and causing autism-like social problems and repetitive behaviors in the mice3. Stimulating Purkinje cells in a part of the cerebellum known as right crus 1, which connects to the medial prefrontal cortex, resolved the mice’s social difficulties — but not their repetitive behaviors.

In July in Nature Neuroscience, the team published new results showing that inhibiting the posterior vermis — a different part of the cerebellum that also sends signals to the prefrontal cortex — reverses the mice’s repetitive behaviors instead.

Inhibiting either part of the cerebellum spurs excess activity in the medial prefrontal cortex, the researchers note. And tamping down this excess also curbs the mice’s social difficulties and repetitive behaviors. Inhibiting the ventromedial thalamus, a hub-like region where signals from the cerebellum converge before arriving at the prefrontal cortex, resolves all of the animals’ autism-like behaviors.

The results jibe with a prevailing theory that autism arises from a signaling imbalance between neurons, Tsai says. By probing neural circuits and observing what regions of the brain are overly activated or dampened, researchers can learn more about the origins of this imbalance.

The study reveals only half the picture, however, because a different set of neurons extends in the opposite direction — from the cortex back to the cerebellum. These connections form the other half of a loop that governs social behavior. Tsai says his team also intends to manipulate activity in this half of the circuit in future studies.

And the circuit interacts with other brain regions, too. The cerebellum also connects to the ventral tegmental area, a region of the brain involved in encoding and processing rewards. Inhibiting this circuit also makes mice less sociable, according to a study last year4.

“The ventral tegmental area is kind of a hub of many within the broader distributed sociability circuit network,” says Matthew Anderson, associate professor of pathology at Harvard Medical School, who was not involved in last year’s study. His own work has shown that dampening excessive neuronal activity in the ventral tegmental area can alter sociability in a mouse model of autism5.

Together the findings show that the cerebellum — classically thought of as a regulator of motor function — plays a critical role in social behaviors through its connections with other brain regions implicated in autism, says Aleksandra Badura, assistant professor of neuroscience at Erasmus University in Rotterdam, the Netherlands, who was not involved in the studies.

“I think that this is now a nail to the coffin for everyone who claimed that the cerebellum has just this motor function,” Badura says.

Another circuit extends from the prefrontal cortex to a brain region called the basolateral amygdala, and it, too, is linked to autism-like social behaviors in mice6. Altered activity in the amygdala is associated with core autism traits, including difficulties in processing social information.

Using a method called retrograde labeling, researchers traced signals from two parts of the prefrontal cortex — the infralimbic and prelimbic cortices — to the amygdala. The infralimbic pathway was particularly active when mice were socially interacting, whereas prelimbic neurons were active to a lesser extent.

Silencing the infralimbic cortex or stimulating the prelimbic cortex caused mice to avoid social interactions with other mice, the researchers found, suggesting these two subcircuits play antagonistic roles in regulating social behavior. They published their results in July in Cell Reports.

In another part of the experiment, the researchers gave mice a mild electric foot shock and saw that it activated the prelimbic circuit. When they later reactivated this circuit without giving a foot shock, the mice again avoided other mice. These findings suggest that the two subcircuits code for opposing emotional responses.

The two subcircuits may connect to different kinds of cells in the amygdala that respond to positive and negative stimuli, Page speculates.

As teams continue their search for neural circuits relevant to autism’s social traits, they need to address several pressing questions. Perhaps the most important of these is understanding how these neural circuits relate to one another — and to the entire brain, Tsai says.

“There are tons and tons of regions of the brain that have been implicated [in autism],” he says. “I think it’s important to try to understand what that wide network is and then taking a step back from that and asking: What is it actually doing?”

For his own research on the cerebellum, that means not only identifying neural circuits that are critical for regulating autism-like behaviors, but also understanding how this regulation takes place at a molecular level, he says.

Another looming question is what kinds of interventions could target these neural circuits in humans, Carlson says. The amygdala, thalamus and prefrontal cortex all contribute to autism traits, but they sit too deep inside the brain for existing noninvasive brain stimulation techniques, which typically deliver electricity or magnetic pulses, to manipulate brain activity.

Deep brain stimulation, a technique that involves implanting small electrodes inside the brain, can reach these areas, but researchers don’t understand social circuits well enough yet to be able to use it on them, Carlson says.

Manipulating the cerebellum, which is not so deep, may offer a more feasible way to tap into broader social circuits affected in autism, Tsai says. But further studies are needed to map out in detail the intricate circuitry connecting the cerebellum to other brain regions.

“It’s like a road map,” he says. “You can fix one road, but if there are thousands of other streets that are impacted and changed, it’s not going to work. Ultimately, you need to know the bigger picture.”