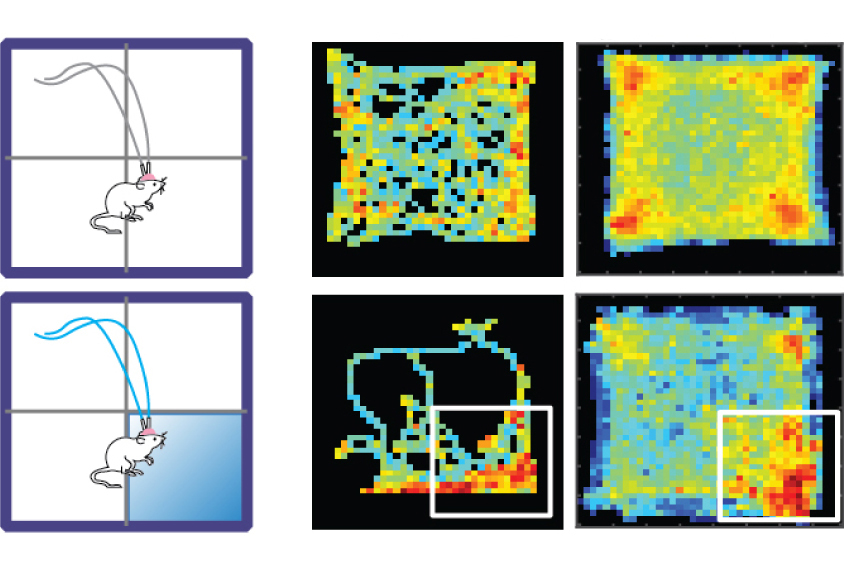 Happy place: Mice tend to spend time in a certain corner if ‘reward’ neurons are stimulated whenever they are there.

The cerebellum, often summed up as the brain’s motor region, is in fact involved in mediating the pleasure people derive from socializing, a new study suggests1.

This unexpected finding, published today in Science, may explain why the region consistently pops up in studies of autism.

The findings are based on mice: Muting neurons that connect the cerebellum to a reward center in the brain makes mice less sociable, researchers found.

“Any process that interrupts this [pathway] could be a reason for the brain not being able to provide the reward required for socializing,” says lead investigator Kamran Khodakhah, chair of neuroscience at Albert Einstein College of Medicine in New York City.

“This kind of work has the potential to change the textbooks about what the cerebellum is doing in the brain,” says Sam Wang, professor of neuroscience at Princeton University, who was not involved in the study.

Researchers have known since the 1970s that the cerebellum connects to the VTA, but the reason for these links was unclear2. Khodakhah and his colleagues set out to explore this using a technique called optogenetics. They made mice that produce light-sensitive proteins only in cerebellar neurons and placed the mice in a square chamber.

Whenever a mouse visits a certain corner of the chamber, a probe flashes light into the VTA. The researchers were able to selectively switch on and off the subset of neuronal projections, or axons, that extend from the cerebellum to the VTA.

The mice spend most of their time in this corner, suggesting that activating the axons stimulates a reward circuit in the VTA. This is as effective as directly turning on reward neurons in the VTA, the researchers found. (Turning off the axons has no effect on the mice’s choice of corners.)

The light flashes do not affect the mice’s activity levels or motor coordination, which could have skewed the results.

In another test, the researchers gave the mice a choice of either a darkened or brightly lit part of a chamber. Mice typically take cover in darkness. But if researchers activate cerebellar fibers when the mice are in the bright region, the mice learn to prefer the bright region. These findings also suggest that the mice find it pleasurable when these neurons are activated.

The cerebellar axons are more active when the mice explore a chamber containing another mouse — a social reward — than one containing an object. However, when the researchers turn off the projections to the VTA, the mice stop seeking the company of the other mouse.

“This is a potential mechanism by which the cerebellum actually is contributing to autism,” says Peter Tsai, assistant professor of neurology at the University of Texas Southwestern in Dallas, who was not involved in the work.

However, turning on the axons has no effect on the social interaction. The finding suggests that the cerebellum is required for social reward but does not work in isolation.

“If you’re not getting the social reward that comes out of a social interaction, you’re probably not going to pursue it,” Tsai says.

The next step is to study the cerebellum’s connections to the VTA in people and in younger mice.

Wang’s team has found that disrupting the cerebellum early in life alters the mice’s social behavior, but doing so in adulthood has no effect.

Khodakhah’s team is also looking at the link between cerebellar neurons and the VTA during social interactions in mouse models of autism.