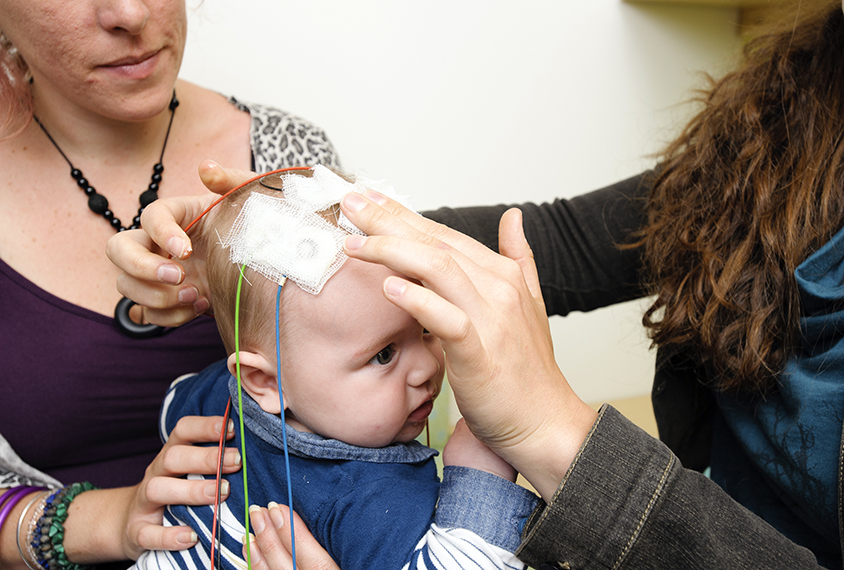 Wave forms: Some patterns of brain connectivity in babies are associated with autism traits.

Infants with particular patterns of electrical activity in the brain go on to have high levels of autism traits as toddlers, a new study shows1.

Specifically, babies who have unusually high or low synchrony between certain brain waves — as measured by electroencephalography (EEG) — at 3 months old tend to score high on a standardized scale of autism-linked behaviors when they are 18 months old. These levels of synchrony reflect underlying patterns of connectivity in the brain.

The work “reinforces the concept and the truism that brain development is affected before autism diagnoses are made,” says lead researcher Shafali Spurling Jeste, associate professor of psychiatry and neurology at the University of California, Los Angeles. “We believe that we could work to start rewiring the brain if we intervene effectively and early enough. That message, quite simply, is a very important one.”

The study involved ‘baby sibs,’ the younger siblings of autistic children. Baby sibs are 10 to 20 times more likely to have autism than the general population. Previous research showed similar patterns of altered connectivity in functional magnetic resonance imaging (MRI) data from infants who were later diagnosed with autism, but MRI is costly and prone to errors.

EEG measurements, on the other hand, are relatively inexpensive and simple to perform, which makes them more practical for clinical use, says Charles Nelson, professor of pediatrics and neuroscience at Harvard University, who was not involved in the study.

“The MRI work, of course, is brilliant and compelling, but we are never going to do MRIs at scale, with thousands of children,” he says.

Jeste’s team used an array of electrodes placed on the scalp to record the brain waves of 36 baby sibs and 29 controls. They focused on alpha waves, which arise from the combined rhythmic firing of large groups of neurons at frequencies of 6 to 12 hertz. They tracked the degree to which these waves are synchronized between different brain regions. The more the waves are in sync, the more connected the regions are.

When the children were 18 months old, the researchers assessed them for repetitive behaviors and social-communication difficulties using a clinical assessment called the Autism Diagnostic Observation Schedule (ADOS). They used a machine-learning algorithm to identify patterns of brain waves in infancy that predicted autism traits in toddlers.

Children with lower synchrony within the frontal lobe and greater synchrony between the right temporal and parietal lobes — regions that are important for social cognition and attention — during infancy had more autism traits as toddlers than the other children did, the study shows. The results were published 13 June in Biological Psychiatry: Cognitive Neuroscience and Neuroimaging.

The results suggest that the frontal lobe is less connected and the temporo-parietal junction is more connected in children with autism traits than in controls. Enhanced connectivity where the temporal and parietal lobes meet — an area associated with social-information processing — may reflect inefficiencies in the neural networks there, as well as structural changes in the nerve fibers that connect brain regions, known as white matter, the researchers say. Previous studies have found both features in baby sibs who later received an autism diagnosis2,3.

The study did not predict autism per se, but instead focused on measures of autism traits.

“We did this because the autism spectrum is incredibly diverse, and symptoms are not all-or-nothing,” says Abigail Dickinson, assistant project scientist in Jeste’s lab, who worked on the study.

The study also adds credence to the idea that EEG is an effective and easy-to-use tool for detecting early patterns of brain activity that foretell future development, says Ashura Buckley, a pediatric neurologist at the U.S. National Institute of Mental Health, who was not involved in the study.

Further work remains before EEG measurements could become part of an infant’s routine visits to the pediatrician, Jeste says, in part because her team observed differences between groups of children but not at the individual level.

“We are not at the point where we recommend using EEG as a clinical screening tool for autism,” Jeste says.

To build upon this work, Jeste’s team plans to study other children who have an elevated likelihood of autism due to factors such as preterm birth or specific genetic variants. Additional EEG data from these groups should help to clarify whether brain wave differences are specific to baby sibs or not.

This article has been modified from the original. An earlier version described the ADOS as a clinical questionnaire; it is an interactive assessment.