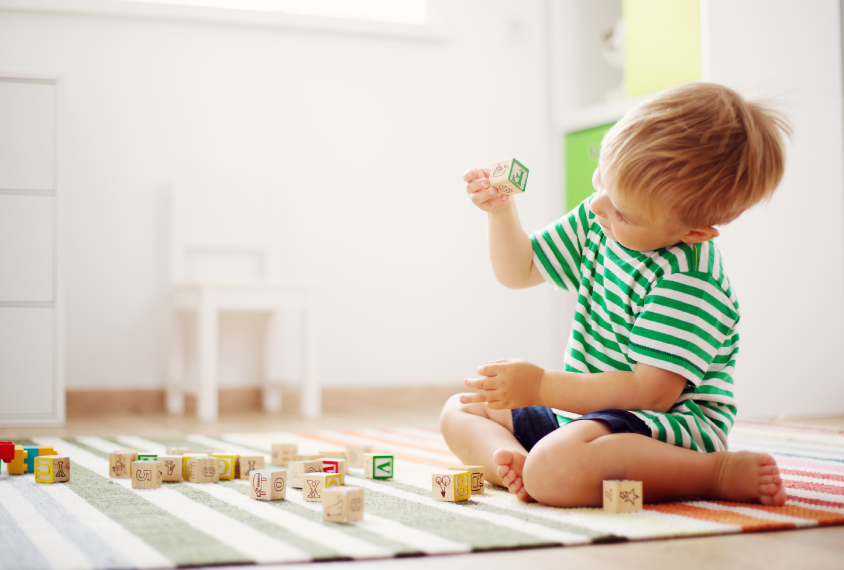 Building blocks: Analyzing the trajectories of children with autism may help researchers identify subgroups of the condition.

A recalibrated version of a widely used test for autism may accurately reflect autistic children’s development as they grow and become verbal, according to a new study1. The revised test identifies worsening autism traits in a subgroup of children who would not otherwise have been flagged for the condition.

The Autism Diagnostic Observation Schedule (ADOS) is one of the standard tests for autism. A clinician administers the play-based assessment in a natural setting over about an hour. The test has different parts for young children of different ages and skill levels: Toddler Module for young, nonverbal toddlers, Module 1 for minimally verbal children over 30 months of age and Module 2 for children who speak phrases.

But ADOS scores are not consistent across these modules because of, for example, the natural development of language. This mismatch may prevent doctors from accurately tracking children over time and cause them to miss opportunities for intervention, says So Hyun Kim, clinical psychologist at Weill Cornell Medical College in New York.

Instead of using the raw ADOS scores, Kim’s team used a statistically calibrated version called Calibrated Severity Scores (CSS). This scale measures autism severity independent of characteristics that change over time, such as language and cognition; it provides standard scores from 1 to 10 for core autism features at each age and language level.

“When comparing children from one time point to another point, we are more sure the changes are not driven by changes in aging or language, but by the underlying autism,” Kim says. “It can allow more valid comparisons across modules.”

Kim and her colleagues used the CSS in 149 toddlers (119 boys) who had been referred to a clinic for possible autism diagnosis. They tested each participant an average of five times between the ages of 14 and 36 months and assigned them to one of four trajectories: non-spectrum (25 percent); moderately improving (25 percent); worsening (27 percent); and severe-persistent (23 percent).

Children in the ‘worsening’ group tend to start out with a relatively high intelligence quotient (IQ) score and above-average verbal and cognitive skills. Although verbally proficient, these children often develop worsening repetitive behaviors, as well as stereotyped behavior and speech  — a trajectory Kim calls “late onset.” This decline is not apparent in these children’s raw ADOS scores, however, so the ADOS would not flag them for behavioral intervention. Clinicians using the ADOS also may miss changes in autistic children who have strong language skills and a high IQ because their autism traits appear mild.

In the ‘moderately improving’ group, CSS scores revealed that social-communication skills improve, but repetitive behaviors remain stable over time, indicating that these traits, too, manifest differently in the subgroups. The results appeared in September in the Journal of the American Academy of Child and Adolescent Psychiatry.

The results present opportunities for clinical intervention, says Marjorie Solomon, professor of psychiatry and behavioral sciences at the University of California, Davis MIND Institute, who was not involved in the work.

“Using statistical techniques for trajectory analysis may help us not only to define more etiologically similar subgroups, but to better tailor treatments to those groups and to better advise families on prognosis for their children,” she says.

The researchers saw considerable individual variation within the subgroups because of the toddlers’ disparate treatments and varying ages at first examination. However, overall, the subgroups track with observations in the clinic, other experts say.

“Children with the mildest and those with the most severe symptoms at initial referral often remain at either end of that continuum, whereas there seems to be more variability among children with more intermediate levels of symptoms,” says Lonnie Zwaigenbaum, director of autism research at the University of Alberta in Canada.

The researchers plan to use CSS scores to examine the effects of interventions, says co-lead investigator Catherine Lord, distinguished professor in residence of psychiatry and education at the University of California, Los Angeles.

They also plan to use data from an ongoing study that has followed more than 100 individuals, now in their late 20s, since age 2. They aim to investigate how the autism features in this group contribute to practical outcomes such as well-being, social life and employment, separately from intelligence and language.

This article has been modified from the original. A previous version incorrectly described the ADOS modules for young children.