The gut microbiome is having a moment. An explosion of research over the past decade has delved into a possible connection between the microbiome and brain conditions, including autism. Once-fringe microbial treatments for autism, such as fecal transplants and probiotic pills, are receiving serious scientific attention and funding.

It’s still an open question, however, whether the microbiome has a direct effect on autism traits. The most promising data supporting this idea involve altering a mouse’s gut flora, but it is not clear exactly what the mechanism is or if this work translates to people. And the evidence from human studies linking microbes to autism is thin, if a 2021 review of the literature is any guide.

Adding to the uncertainty, new unpublished data from one of the largest human studies yet suggests that the link between an atypical gut microbiome and autism is driven solely by a difference in diet.

At least four small firms are spearheading early-stage trials of ‘bug as drug’ treatments for autism-associated traits. But until those trials play out, the role of the microbiome in autism is far from clear, says Gaspar Taroncher-Oldenburg, a consultant on microbiome research for the Simons Foundation, Spectrum’s parent organization. “There’s no denying that the microbiome is part of the [autism] conversation,” Taroncher-Oldenburg says. “But it’s a very complex conversation, and we’re only starting to scratch the surface.”

A potential connection between the gut microbiome and autism first surfaced in the 1990s, after parents reported changes in their autistic children’s behavior when the children took antibiotics, which kill some gut bacteria. A 2000 study following up on this idea showed that 8 of 10 autistic children taking an antibiotic had temporary improvements in their speech and sociability. Later work associated an atypical gut microbiome with unusual social behaviors in mice.

Yet no direct evidence of a gut-microbe-autism link emerged until about five years ago, when a team of researchers reported that feeding a species of gut bacteria, Lactobacillus reuteri, to mice with autism-like traits increased the animals’ sociability and normalized their atypical brain activity. In 2019, the same group of researchers reported similar benefits of the treatment in three mouse models of autism.

This year, they replicated the result in yet another autism mouse model. In that study, the team also showed that germ-free mice that received a fecal transplant from the autism model mice developed the latter’s atypical social behaviors. By putting certain microbes into the animals, “you can affect the brain, and you can affect behavior,” says lead researcher Mauro Costa-Mattioli, professor of neuroscience at Baylor College of Medicine in Houston, Texas.

In 2019, Costa-Mattioli and his colleagues identified a pathway — the vagus nerve, which links the gut and the brain — that may underlie this altered behavior: Cutting this nerve in mice blocks the effects of L. reuteri on sociability. Another possible mechanism, involving levels of stress hormones, surfaced in June. But many details about how gut bacteria might communicate with the brain remain unresolved.

The mouse studies have also garnered criticism. A 2019 study revealing that mice developed autism-like traits after receiving a fecal transplant from autistic children came under fire for potential errors in data analysis. A similar 2021 study likely suffers from the same issues, says Kevin Mitchell, associate professor of genetics at Trinity College Dublin in Ireland: small datasets, too many statistical tests with no prior hypothesis, and no correction of the statistics for those many tests. As a result, “it just looks like spurious noise to me,” he says.

On top of the potential data-analysis issues, many experts remain unconvinced that the mechanisms operating in mice are relevant to people. For one, rodent experiments “tend to use pretty dramatic manipulations, like wiping out the microbiome entirely,” says Jeremy Veenstra-VanderWeele, professor of psychiatry at Columbia University. What’s more, he says, “mice can’t tell us why they are spending less time with other mice. They could be less interested in other mice, or they could just feel gassy and want to be alone,” he says.

And mice do not have autism. “Defining autism in a mouse or rat seems quite difficult,” says Catherine Lord, distinguished professor of psychiatry and education at the University of California, Los Angeles.

Much of the human data on the gut microbiome and autism rely on observational studies, in which researchers compare stool samples from autistic people with those from controls. These studies often reveal differences in the two groups’ gut microbes, but the differences vary from one study to the next. In one 2005 study, for example, scientists found higher numbers of the bacterium Clostridium histolyticum in autistic versus non-autistic children. A 2012 report showed bacteria from the genus Sutterella as unique to the autistic children in the study, and work in 2017 flagged a number of other microbes that differ between autistic and non-autistic children.

Other research suggests that the key difference between the microbiomes of autistic and non-autistic people is not a particular microorganism, but the diversity of microbes. But there is no consensus on the amount of diversity that is standard for either group. 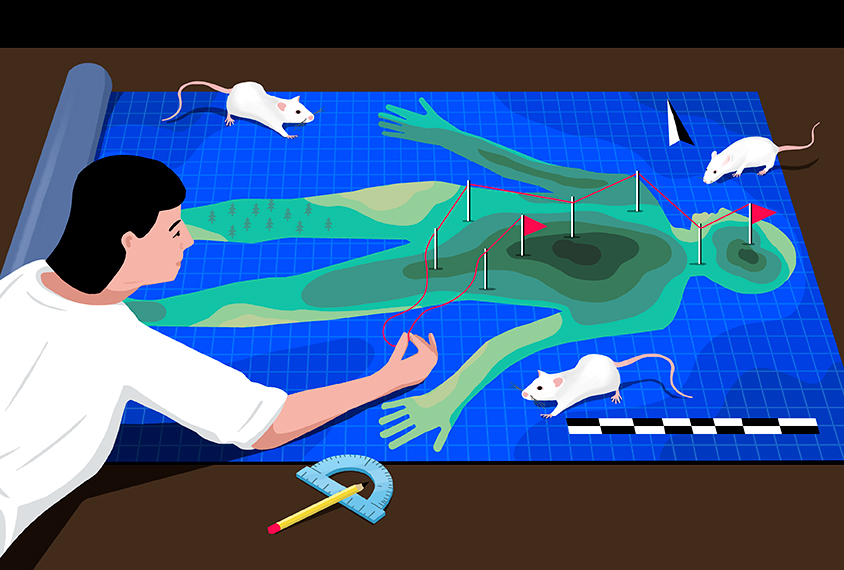 The results of such studies may differ because of the myriad potential influences — from home environments to genetics — on the microbiome. Some of these factors also vary by location, according to a study published in April. A team of researchers found differences between the stool samples of autistic and non-autistic children in Arizona and, separately, in Colorado — but found that the microbes also differed between locations, suggesting that experiments done at different sites could yield disparate results.

Researchers have tried to control for some of the individual variability by using siblings of children with autism as a comparison group. For siblings who share a home, differences in gut microbes are more likely to be linked to autism than to unrelated environmental factors, says Maude David, assistant professor of microbiology at Oregon State University in Corvallis. In a 2021 study, David and her colleagues identified 10 microbes as more common among the 60 autistic children they studied, and 11 other microbes more likely to be present in the children’s 57 non-autistic siblings. Other studies using siblings as controls have produced mixed results, however.

One of the most challenging confounds for human observational studies is diet. Diet has a significant effect on the microbiome, and autistic people often have unusual or restricted eating habits. Autistic people are also at an increased likelihood of having pica, a tendency to put non-food items in their mouths, says Susan Hyman, professor of pediatrics at the University of Rochester Medical Center in New York. As a result, “there are lots of reasons why [children with autism] may have different germs in their guts,” Hyman says.

The new unpublished data suggest diet may be the main reason. In that work, researchers analyzed stool samples and information on diet from 247 participants in the Australian Autism Biobank. They saw minimal differences between the microbiomes of 99 autistic people and 97 unrelated non-autistic people or between 51 autistic people and their non-autistic siblings. They also determined, however, that an autism diagnosis is associated with a limited diet, which is, in turn, linked to a less diverse microbiome and could account for the microbial differences in this population. “In a nutshell, restricted diet drives weak autism-microbiome associations,” said lead investigator Jake Gratten, group leader and senior fellow at the Mater Research Institute at the University of Queensland, when he presented the results at a Simons Foundation lecture in May.

To skeptics, the idea that diet affects the microbiome is much easier to swallow than the notion of bacteria influencing the brain. “I see absolutely no reason to think that changing someone’s microbiome should change their behavior,” Mitchell says. “Some people might think, ‘Where there’s smoke there’s fire,’ but sometimes there’s just loads of smoke.”

The Australian study is not the last word on the topic, however. Because the researchers looked at people’s microbiomes in a snapshot in time, rather than longitudinally, they cannot determine which comes first: the dietary habits or the microbiome change, says Sarkis Mazmanian, professor of microbiology at the California Institute of Technology in Pasadena. Gratten agrees his results are not definitive but says he hopes the findings will “temper the hype” around the gut microbiome’s connection to autism.

In search of more robust data, some autism researchers are shifting their focus from the gut flora themselves to the small molecules, called metabolites, that they produce. Because different microbes may produce the same metabolite, people’s metabolite profiles may be less diverse — and so easier to compare — than their microbiome profiles are, says Jens Walter, professor of ecology, food and the microbiome at University College Cork in Ireland. Metabolites, rather than microbes, he adds, are also the actual active compounds influencing behavior.

In a 2020 study, Mazmanian and his colleagues compared a panel of metabolites obtained from fecal and blood samples across 130 autistic and 101 non-autistic children and found correlations between the levels of certain molecules and behavioral differences. But it is early days for this area of research, and no study has definitively tied any metabolites to autism either. “As we sit here today, I don’t think there’s an answer beyond correlation on whether or not the microbiome indeed contributes to any aspect of autism,” Mazmanian says.

Only one clinical trial so far, published in 2017, has eased autism traits, such as social behaviors, by altering autistic children’s microbiomes — in this case, through a fecal transplant. The benefits persisted for two years, but the study had only 18 participants and no control group. “This was a non-randomized, non-blinded, experimental study,” says Calliope Holingue, a psychiatric epidemiologist at the Kennedy Krieger Institute’s Center for Autism and Related Disorders in Baltimore, Maryland. It’s hard to know whether the changes they saw were really due to the treatment or to a placebo effect — or would have happened anyway, she says.

Controlled trials are forthcoming, however. Axial Therapeutics, which Mazmanian co-founded, is testing an oral treatment designed to remove specific metabolites from the gut, in a trial of 195 adolescents with autism. The researchers plan to look for changes in irritability. Another company, Scioto Biosciences, launched a small trial of its microbiome-based autism treatment, which contains a form of L. reuteri, in August. The company is assessing autism-linked traits using standard questionnaires and neurological biomarkers.

Meanwhile, scientists at Finch Therapeutics are distilling the contents of non-autistic people’s microbiomes, enriching them with microbes that other studies implicate as important, freeze-drying the mix and packaging it into pills. The company plans to start a clinical trial involving 44 autistic children later this year. It will evaluate autism traits and gastrointestinal symptoms before and after treatment.

The results of these trials should help resolve the question of whether it is possible to alter autism behaviors through the gut. Even if these treatments don’t work as hoped, they might still have benefits. “It’s plausible” that a microbiome-based treatment could ease an autistic person’s anxiety or boost her sociability, says Thomas Frazier, professor of psychology at John Carroll University in University Heights, Ohio. It’s more likely, though, that it would alleviate some of the digestive issues that often accompany autism, he says.

Improvements in digestion could have downstream effects on behavior, too. As Lord puts it, “I think that, probably, most of us don’t feel super sociable if we have a stomachache.”

A previous version of this article incorrectly stated that Finch Therapeutics’ upcoming clinical trial had 70 participants and would assess efficacy.