Study finds no link between autism and gut microbes 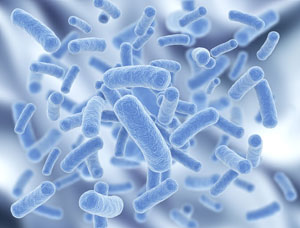 Bacterial controversy: Some studies have found certain bacterial species in children with autism and not in controls, but a new study says there are no differences between the groups.

Contradicting a popular hypothesis in autism, a new study from Australia has found no connection between autism and bacteria in the gut. The analysis, published 20 September in the journal Autism Research, reports that the gastrointestinal (GI) systems of children with autism harbor the same bacteria as those of their typically developing siblings1.

“Our conclusion was there’s no single organism that we can pinpoint as being always involved in autism,” says Enzo Palombo, associate professor of microbiology at the Swinburne University of Technology in Melbourne, Australia, who is one of the investigators.

Based on 51 children with autism and 53 unaffected siblings, the study is larger than most studies of the microbiome — the collection of microbes in the body — in children with autism. Because siblings share genes and their environment, this approach reduces ‘noise’ in the data from factors unrelated to autism, the researchers say.

However, critics argue that because children in the same family tend to have similar microbiomes, comparing children who have autism with their unaffected siblings may also make it more difficult to pick out subtle abnormalities associated with autism.

For years, scientists have suspected that something is amiss in the guts of children with autism. Multiple studies have shown, for instance, that these children suffer from GI problems at rates far higher than other children do2 3 4.

Analysis of gut bacteria in children with the disorder has revealed some provocative findings. For instance, a 2005 study found that children on the autism spectrum have elevated levels of Clostridia, a class of bacteria that can produce neurotoxins, in their guts5. And in a study this year, researchers found a class of bacteria known as Sutterella in children who have both autism and GI problems, but not in typically developing controls.

Some researchers have gone so far as to suggest that these atypical microbial populations may actively contribute to autism symptoms. For example, research last year showed that the fatty acids produced by gut bacteria can alter the brain and behavior6 7.

That’s a controversial proposition, especially because the connection between autism and gut microbes remains murky. So far, studies have been small and their results inconsistent, implicating different kinds of bacteria.

In the new study, the researchers sequenced DNA extracted from the stool of 51 children with autism and 53 of their unaffected siblings, all between the ages of 2 and 12. The researchers then matched the sequences against a database of bacterial genomes to identify the microbes in each sample.

“We are showing that the link between specific bacteria in the gut and autistic symptoms and behavior is not definite,” says Palombo.

Still, other researchers say it’s too early to reject the idea that intestinal bacteria play a role in autism.

“In general, I think it’s a well-run study,” says Sydney Finegold, emeritus professor of medicine at the University of California, Los Angeles. Finegold compliments the Australian researchers in particular for their large sample size, and for including children both with and without GI problems. But, he adds, “I disagree with their conclusion that there’s no relationship between intestinal bacteria and GI dysfunction and autism.”

For one thing, Finegold says, the results of the study may be confounded by antibiotic use. Palombo and his colleagues excluded children from their study who had taken antibiotics in the previous 15 days, but Finegold says he believes that that criterion is not stringent enough.

“We know that the impact of antibiotics on intestinal bacteria lasts for months, and some would say for years,” he says. He says these studies should preferably exclude children who have taken antibiotics anytime in the previous several months.

For his part, Palombo says, “I agree that a longer abstinence period would have been ideal, but we may not have had as many study participants.”

Palombo agrees that it’s too early to rule out a connection between intestinal bacteria and autism. A handful of the children with autism have various bacterial abnormalities, such as an elevated level of one species or another, he says, indicating that a subset of children with the disorder may show differences.

Some experts say comparing the gut microbes of children who have autism with those of their unaffected siblings, rather than with unrelated controls, may make it more difficult to detect subtle differences.

“Autism is a complex etiology,” says Catherine Lozupone, a postdoctoral fellow in Rob Knight’s lab at the University of Colorado at Boulder. “There’s a genetic basis to it and there’s an environmental basis to it.”

Siblings share many genes and environmental exposures, would be expected to have similar microbiomes. In fact, some research has shown that whereas the gut microbes of children with autism are significantly different from those of unrelated controls, siblings have microbial populations that fall somewhere in the middle5 8.

The Australian team next plans to look for differences in viral populations among these groups, as well as to study whether the bacteria in children with autism produce different metabolites than those in typically developing children.

Overall, the conflicting results of these studies may result from the fact that there’s not yet a single standard way to conduct this research, Lozupone says.

In addition to using different kinds of control populations, researchers can collect microbial DNA from fecal samples or, occasionally, directly biopsy the intestines. Some scientists compare the presence of specific species or genera, and others look for differences in families or classes of bacteria, which may obscure subtle differences at the finer, species level.