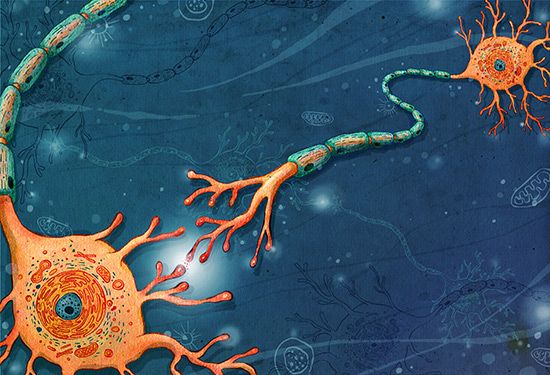 Julia Yellow Neuron navigation: A complex process directs the long, thin projections of neurons to their correct targets in the brain.

Many people with autism are known to be overly sensitive to sensory stimuli, such as sound or light. However, the reasons for this, as well as for other symptoms of autism, remain poorly understood.

Autism probably results from ‘abnormal’ junctions, or synapses, that connect neurons. This hypothesis is based largely on the many genes known to function at the synapse — such as SHANK3, NLGN1 and FMR1 — that have been found to be mutated in individuals with autism1, 2, 3. It is also based on imaging studies that have reported altered functional connections between brain regions in people with autism4.

Circuits in the brain develop via complex, step-wise processes. These steps include the birth of neurons; the correct navigation of neurons’ long projections, or axons, to appropriate target regions; their migration to appropriate positions within the brain; the formation and maturation of new synapses; and the pruning of excess or inappropriate synapses.

Defects in any of these steps can result in abnormal brain wiring, potentially leading to symptoms of autism — such as sensory sensitivity.

Indeed, researchers have theorized that the absence or reduction of the corpus callosum — a dense bundle of neuronal projections, or white matter, that connects the left and right hemispheres of the brain — could lead to autism. The corpus callosum integrates motor, sensory and cognitive circuits.

Interestingly, abnormalities in the development and organization of several major white matter tracts, including the corpus callosum, have been observed in the siblings of children with autism who later developed autism themselves9. It is therefore possible that autism symptoms might arise if something were to alter the stereotyped wiring patterns of the brain.

One key component of brain wiring is axon guidance, the process by which a neuron extends a long projection that navigates through the developing brain to a precise target region. Numerous molecules on the surface of the axon’s growing end, or growth cone, control this process. The growth cone is a highly dynamic, actin-rich structure at the far end of the axon that responds to molecular cues in the brain environment.

When the growing axon encounters one or more of these molecular cues, the axon often alters its direction of growth — as if responding to directions from a navigation system in your car. Many proteins are involved in this axon navigation. Interestingly, once the axon reaches its target destination, many of the same axon guidance molecules are then repurposed to help form new synapses10.

One family of axon guidance molecules, the EPHB gene family, plays an essential role in guiding axons in the developing brain, including in the corpus callosum and in axon fiber tracts between the thalamus and cortex. These latter connections are critical for relaying and processing sensory information. EPHB genes are also involved in the formation of synapses and the strengthening of synapses in response to experience — a phenomenon called synaptic plasticity11, 12, 13.

Researchers recently identified a mutation in EPHB2 in one individual in the Simons Simplex Collection14. The collection, funded by the Simons Foundation, SFARI.org’s parent organization, is a database of clinical and genetic information on people with autism and their families. The EPHB2 mutation, which disrupts a region essential for the EPHB protein to signal during axon guidance, suggests that EPHB2 is a candidate gene for autism. This mutation prematurely truncates the EPHB2 protein and inactivates its signaling activity15.

Consistent with the importance of EPHB signaling in brain development, mutant mice lacking this signaling function can have severe abnormalities in the corpus callosum and a branch of the anterior commissure — a white matter tract that connects the temporal lobe cortex in humans16, 17, 18, 19.

What’s more, in mice lacking EPHB signaling, we detected large bundles of misprojected axons between the caudal thalamus and specific regions of the cortex20. Connections between the thalamus and cortex are essential for processing and integrating sensory information. Abnormalities in these circuits could contribute to the sensory symptoms seen in people with autism.

EPHB2 is also linked to the formation of synapses11, 21, partly through its recruitment of certain proteins — called NMDA receptors — which transmit excitatory signals to neurons13. The part of EPHB2 that sticks out of the cell also promotes contact between the axon and the signal-receiving branches of neurons, or dendrites, and plays a role in synaptic plasticity11, 12, 22. However, both of these latter functions appear to be largely independent of EPHB2’s activity as an enzyme12, 18.

We aim to understand the role of EPHB signaling in brain wiring and synapse formation, and to explore whether defects in EPHB signaling contribute to autism-like symptoms. Understanding whether and how axon guidance genes are significant risk factors for autism may also help inform new treatment strategies for autism spectrum disorders.