Brain scans of sleeping mice hint at subtypes of autism 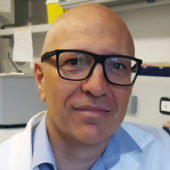 Autism features vary considerably from one person to the next. One of the biggest challenges in autism research is to break down the autism spectrum into subtypes, each characterized by a distinct set of biological mechanisms that we can target with specific treatments.

Autism’s strong heritability has prompted some researchers to use genetic screening to identify subtypes of the condition. Studies have identified dozens of genes that, when mutated, increase the risk of autism. However, making biological sense of the many seemingly unrelated genetic variants associated with autism has proven difficult.

Under the assumption that autism features reflect an alteration in brain activity, my team is trying to identify brain-circuit alterations that result from autism mutations.

We know that many brain circuits are evolutionarily conserved across rodents and people1,2. So, our strategy is to map brain connectivity in mice that have different mutations linked to autism and then to treat each map as a piece of a large tiling puzzle.

By mapping the effects of a sufficiently large number of mutations, we are starting to discover shared alterations in brain circuitry. These commonalities enable us to make sense of the diverse genetic underpinnings of autism and identify meaningful subtypes of the condition.

We use functional magnetic resonance imaging (fMRI) to create maps of brain activity in sedated mice. Synchronous activity in two or more brain regions suggests the regions are connected in a circuit. By comparing brain scans from mutant and control mice, we can see which autism mutations affect common brain circuits. We can also investigate whether the alterations are present in people with autism who have the same mutation.

In the past few years, we have mapped brain activity in mice lacking CNTNAP2 or SHANK3, two top candidate genes for autism3. These animals show repetitive behaviors and are less responsive to certain social cues than typical mice are. The molecular pathology associated with mutations in these genes has also been thoroughly investigated, enabling us to relate abnormal brain activity to specific changes in brain anatomy or neuron function.

We see similar circuit alterations in both sets of mice. The alterations affect the connectivity of a region called the prefrontal cortex. This region is critical for social recognition and cognitive functions, such as the ability to cope with novel experiences. Reduced communication between the prefrontal cortex and its long-distance targets could explain the autism-like behaviors observed in these mice.

We also see these alterations in mice missing a stretch of DNA on chromosome 16 known as 16p11.2 — another major genetic risk factor for autism. Our brain-mapping approach closely reproduces observations made in people. Earlier this year, we showed that both mice and people with a 16p11.2 deletion show underconnectivity involving the prefrontal cortex4. These similarities suggest that the circuit alterations in people with autism involve physiological impairments that researchers can model in mice and map with fMRI.

In 16p11.2 mice, we found altered wiring and communication between the prefrontal cortex and a deep brain region called the thalamus. We made this observation using an invasive viral tracing technique rather than fMRI. This finding provides a plausible mechanism for the desynchronization of prefrontal cortex areas arising from the 16p11.2 deletion.

The observation that three genetic mouse models of autism have a shared alteration in brain circuity suggests we can cut through the heterogeneity of autism to identify meaningful subtypes.

To investigate the effects of other mutations linked to autism, we collaborated with Nicole Wenderoth’s team at ETH Zurich in Switzerland. Together, we plan to produce a database of fMRI maps from more than 20 mouse strains, each with a distinct mutation. We map all of the scans in our database under similar experimental conditions, permitting a direct comparison between activity maps.

As we analyze the dataset, we are finding additional cross-mutation convergences. For example, mutations in a group of genes that includes the chromatin remodeling factor CHD8 appear to result in overconnectivity between brain regions important for sensory processing5.

Other mutations, such as those in the fragile X syndrome gene FMR1, decrease communication between the same areas6. Both groups of mutant mice appear to exhibit normal connectivity between the prefrontal cortex and other brain regions.

By combining and comparing these activity maps in a single database, we might be able to recreate the spectrum of brain connectivity changes in autism and identify autism subtypes characterized by common circuit alterations. Our approach offers a way to explain the clinical variability among people with autism.