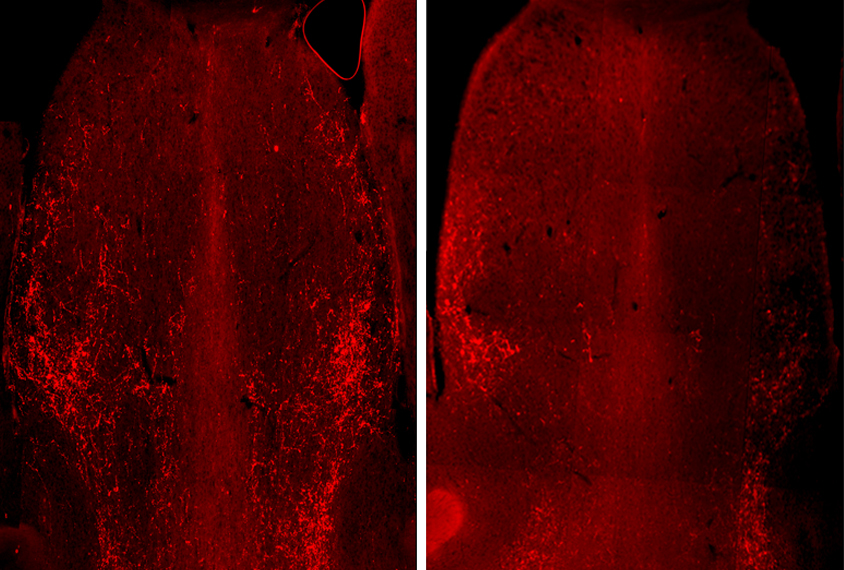 Mice missing a copy of the autism-linked gene MAGEL2 have trouble discerning between a familiar mouse and an unfamiliar one, but treating them with the social hormone vasopressin reverses this deficit, according to a new study.

Mutations in or deletions of MAGEL2 are linked to autism and several related conditions, including Prader-Willi syndrome, which is characterized by intellectual disability, poor muscle tone, difficulty feeding and problems with social interactions.

The new findings suggest that these social issues in people stem from impairments in vasopressin’s function in a brain region called the lateral septum, which relays signals between the hippocampus and the ventral tegmental area. They also hint that vasopressin treatment could remedy those issues, says Elizabeth Hammock, assistant professor of psychology and neuroscience at Florida State University in Tallahassee, who was not involved with the study.

A 2020 study showed that low levels of vasopressin in cerebrospinal fluid can flag many infants who are later diagnosed with autism. But clinical trials have shown that either providing vasopressin or blocking its effects can improve social communication in autistic children.

Because of these seemingly contradictory results, “a better understanding of how alterations in the vasopressinergic system leads to social deficits and how vasopressin administration could resolve some of these problems was needed,” says co-lead researcher Freddy Jeanneteau, professor of neuroscience at Montpellier University in Montpellier, France.

Jeanneteau and his colleagues focused on mice with one copy of MAGEL2 because the animals make less of multiple neuropeptides, including vasopressin. These mice show less interest in other mice than controls do, and they spend less time sniffing strangers than familiar mice, suggesting they have trouble telling the difference between the two. But they can discriminate between novel and familiar objects as adeptly as controls can.

Because vasopressin expression in the brain depends on the male sex hormone androgen, Jeanneteau and his colleagues inspected brain tissue from male mice and stained it for a protein that increases in neurons shortly after they are activated. They focused on neurons in the lateral septum because the region is involved in social discrimination.

Compared with controls, MAGEL2 mice show stronger activity in somatostatin neurons — which dampen the activity of other neurons — when exposed to an unfamiliar mouse, the team found. The mice also have fewer vasopressin receptors on their somatostatin neurons, making the neurons less sensitive to vasopressin. And the lateral septum in MAGEL2 mice has significantly fewer vasopressin-producing neuronal projections from other brain regions.

The results suggest that vasopressin-producing projections in the lateral septum ordinarily suppress somatostatin neuron activation during novel social experiences, and that this process is disrupted in the MAGEL2 mice, the researchers say.

Confirming that idea, the researchers used optogenetics to activate these projections and found that it quieted the MAGEL2 mice’s overactive somatostatin neurons and normalized their social behavior. Directly injecting vasopressin into the animals’ lateral septum had a similar effect.

The work was published in November in the Journal of Clinical Investigation.

Previous work has examined the role of oxytocin, a related hormone, in Prader-Willi syndrome. Treating mice that lack MAGEL2 with oxytocin shortly after birth alleviates their social and feeding issues, and a clinical trial of oxytocin treatment for infants with the condition similarly yielded significant improvements. In 2020, researchers began recruiting infants with Prader-Willi syndrome for a new clinical trial involving intranasal oxytocin.

Oxytocin and vasopressin are intimately linked: The two hormones can communicate with each other’s receptors, says Sue Carter, professor emerita of biology at Indiana University in Bloomington, who was not involved in the study. So the fact that vasopressin seems to show similar effects as oxytocin in a MAGEL2 mouse model is not surprising, she says.

But the new work suggests that various genetic mutations associated with autism converge in their effects on vasopressin and oxytocin, whose pathways are readily shaped by experiences early in development, Hammock says.

Jeanneteau and his colleagues are following up on this study by investigating how somatostatin neurons in people with MAGEL2 deficiency help to code social signals, and how that process may diverge from what is seen in neurotypical people.