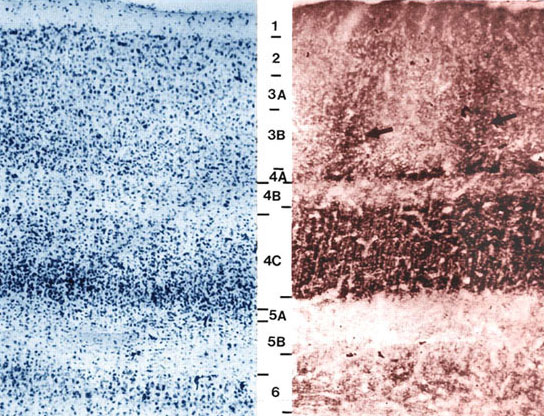 Researchers have used gene expression data to create a map of the layers within the neocortex, a brain region involved in sensory perception, motor control and language, of rhesus macaques. The results were published 22 March in Neuron and are available online1.

The findings paint a picture of the functional organization of the non-human primate brain and highlight similarities and differences between it and the human and mouse brains.

Several research initiatives have aimed to profile the patterns of gene expression within the brains of humans and of model systems such as mice. Creating a picture of the time and place of gene expression can shed light on developmental processes and the functions of various brain regions. These data can, in turn, help researchers understand what goes awry in neurodevelopmental disorders such as autism.

They then mapped the expression patterns of messenger RNAs, the genetic messages that code for proteins, for each of these regions and used statistical analysis to look for clusters of genes that are co-expressed and are more common in certain layers compared with others.

Several networks of genes are abundantly expressed in specific cortical layers and in a sex-specific fashion, the study found. The researchers also used databases listing the function of various genes to determine the roles of the different brain layers.

For example, genes involved in synaptic plasticity — a process thought to underlie learning and memory and to be impaired in autism — are enriched in cortical layers two and three.

The researchers then compared the expression patterns to those in humans and mice, using data from the Allen Brain Atlas. Most patterns are highly conserved between humans and macaques, the study found. For example, in humans and macaques, PDYN — a hormone chemical messenger — is expressed primarily in layers four and five by excitatory neurons, which activate signals in the brain. However, it appears to localize to inhibitory neurons throughout the cortex in mice.

Gene expression patterns in macaques are more similar to humans than are those of mice, the study also found.