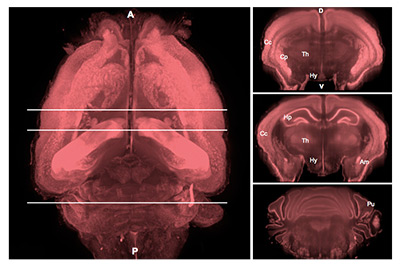 A new method for turning brains transparent and scanning them will make it easier to map neuronal circuits, according to a paper published 24 April in Cell1.

The technique, called CUBIC, uses nontoxic chemicals to remove fat from mouse and marmoset brains and make remaining tissues more see-through. This allows researchers to scan them without cutting them into tiny slices, a laborious process that disrupts neuronal connections.

Last year, researchers from Stanford University demonstrated a brain-clearing method called CLARITY, which requires an electrical device. CUBIC’s creators, who are from RIKEN and other institutions in Japan, say that their method produces similarly clear brains and high-resolution images but is easier to carry out than CLARITY, which they say does not produce consistent results.

CUBIC is based on an older technique for making brains transparent that uses a mixture of three widely available chemicals: detergent, urea and glycerol. Using that technique can be time-consuming and does not achieve the transparency that some newer techniques do, and also causes brains to swell. CUBIC solves those problems by substituting an amino-alcohol for glycerol and involves a second treatment with a similar formula.

The researchers used CUBIC to scan brain structures in mice engineered to express red, green or yellow fluorescent proteins. As with CLARITY, they were able to see subcellular structures such as axons and dendritic spines. They were also able to stain specialized neurons in large blocks of brain tissue.

The team also stained half of a marmoset brain with fluorescent dye and discerned important brain structures, indicating that CUBIC is effective in primates. Finally, the researchers used mice with neurons that fluoresce upon activation to determine which brain cells had been responding to light near the time of death, demonstrating that CUBIC can show how brain cells react to their environment.

The researchers say using the technique on whole human brains is a “dream,” but one that may remain so because of the large size of the brains.