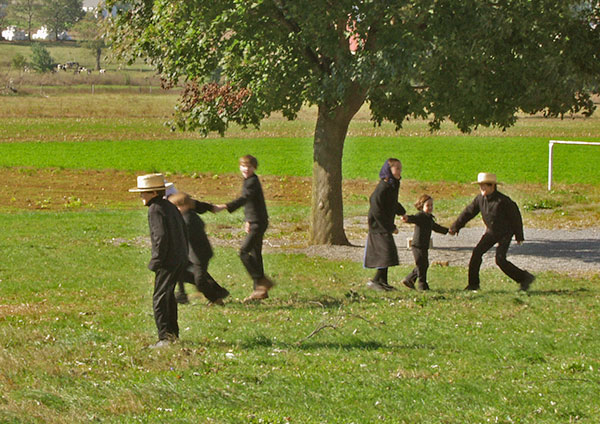 Leon Ritter / Shutterstock.com Inherited risk: A group of Amish children who inherited mutations in both copies of the CNTNAP2 gene have severe epilepsy and autism.

Eight years ago, researchers found inherited mutations in a gene called CNTNAP2 in a group of Amish children with autism and epilepsy.

Over the following two years, the gene shot into prominence as an autism candidate: One team of researchers found a rare harmful mutation in the gene in one individual with autism. And others linked common variants in the gene — present in at least 5 percent of the population — to autism symptoms, such as language problems and faulty brain connectivity. A mouse model lacking both copies of the gene is frequently used to represent the disorder and screen autism drugs.

Now, a new analysis published 26 January in PLoS Genetics significantly brings down the gene’s importance in autism: According to the study, rare mutations in a single copy of the gene are unlikely to be a cause of autism1.

“We can’t rule out that disrupting one copy of CNTNAP2 contributes to autism, but we can say that the overall contribution is going to be relatively low,” says lead researcher Matthew State, chair of psychiatry at the University of California, San Francisco.

State and his colleagues looked for CNTNAP2 mutations in 2,704 people with autism and 2,747 controls by sequencing their exomes — the protein-coding swaths of their genomes. To the researchers’ surprise, they found no harmful mutations in CNTNAP2 in any of the people with autism2. They did come across 13 mutations with unclear effects, but found the same number of mutations in the controls.

“It’s quite clear that CNTNAP2 association through common variants or through these rare coding variants that Matt State has looked at can’t be a very frequent explanation of autism,” says Aravinda Chakravarti, director of the Center for Complex Disease Genomics at Johns Hopkins University in Baltimore, who was not involved with the study.

CNTNAP2’s link to autism began in 2006, when researchers reported mutations in both copies of the gene in a group of Amish children3. A mouse model missing both copies of CNTNAP2 also has behaviors reminiscent of autism4. Earlier this month, for example, one team showed that oxytocin alleviates social deficits in these mice, and suggested the hormone as a treatment for autism.

By all accounts, carrying mutations in both copies of the gene is a clear risk factor for autism.

“The last thing I want is for people to go, ‘Oh, CNTNAP2 is bullshit,’ because I think it’s exactly the opposite,” State says.

The new study’s key finding is that a mutation in just one copy of the gene is likely to be both extremely rare and benign. Mice with one good copy of CNTNAP2 show no symptoms, for example. And the parents of the Amish children with autism, each of whom carries one copy of the mutant gene, have no apparent symptoms, says Daniel Geschwind, professor of neurology at the University of California, Los Angeles, who led the mouse studies.

Much of CNTNAP2’s early promise as an autism candidate came from studies of common variants. A 2008 study linked one such variant to autism in 72 families5, but when the researchers expanded the study to more than 2,500 families, the association disappeared6.

“The initial findings came at a time when genomics was not as sophisticated as it is now,” says State. This is what prompted his team to reexamine CNTNAP2’s autism link, he says.

State’s team also looked at the role of 10 other genes in the contactin family, including CNTN4, which has tenuous ties to autism. They found three harmful mutations in this gene family in people with autism, but turned up the same number in controls.

More specifically in CNTNAP2, the researchers found 13 mutations with unclear effects in both people with autism and controls. To fully explore the effects of these so-called missense mutations, researchers must test them in a living system, says State. His team plans to insert various forms of mutant CNTNAP2 into zebrafish lacking the gene to see if they function normally.

Although the new study suggests CNTNAP2 isn’t a strong autism candidate gene, common variants in CNTNAP2 may worsen certain symptoms, such as language deficits, says Simon Fisher, director of the Max Planck Institute for Psycholinguistics in Nijmegen, the Netherlands. “[The new finding] does not discount a relationship between such variants and language skills,” he says.

Because of their severe epilepsy, many of the Amish children had brain biopsies, which revealed misshapen neurons that may have migrated to the wrong place. Researchers may be able to compare these abnormalities with those seen in mice missing CNTNAP2.

Overall, the findings highlight the need for careful consideration of genetic candidates, says Michael Talkowski, assistant professor of neurology at Harvard University, who was not involved with the study.

“When you start chasing hypotheses without a good statistical argument, it’s potentially a very big waste of resources,” Talkowski says. “I think it’s great that the field is finally getting to this point.”