Pattern of squeaks corresponds to social behavior in autism mice 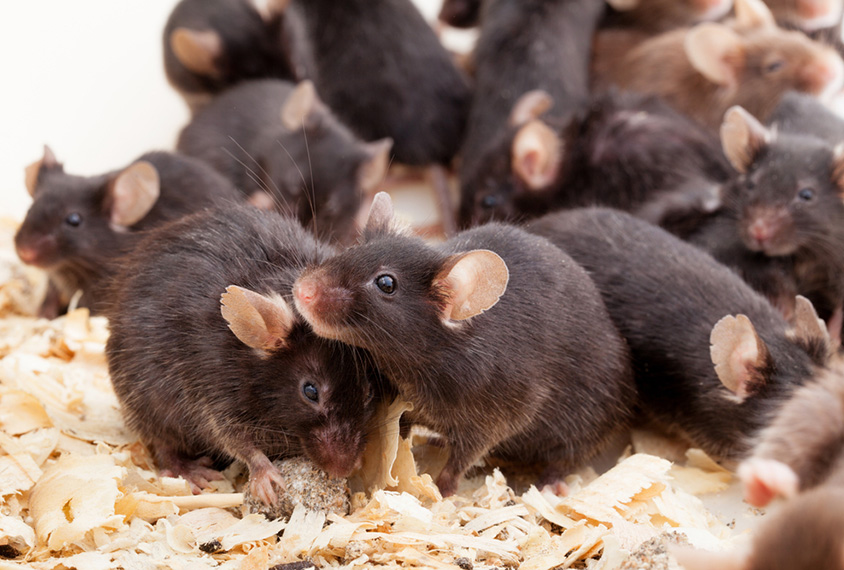 The pattern of high-pitched calls a mouse makes may reflect how, and how much, it is interacting with other mice. The pattern holds for typical mice as well as for two mouse models of autism.

The unpublished findings suggest that mice have a ‘vocabulary’ of calls that match their behaviors. It also suggests that a lack of vocalizing among mice could reflect social difficulties in addition to communication issues: One of the autism models makes fewer calls and participates in fewer social interactions than controls.

Researchers presented the findings today at the 2018 Society for Neuroscience annual meeting in San Diego, California.

Mice make a variety of ultrasonic calls that vary in pitch and duration. Studies have shown that mouse models of autism make fewer calls than typical mice, and their calls have an unusual pattern of pitches. This suggests that autism mouse models, like some autistic people, have trouble with communication.

“There’s a linking theme between what the animal is doing and how they’re expressing themselves,” says lead investigator Joshua Neunuebel, assistant professor of psychological and brain sciences at the University of Delaware in Newark. “What’s surprising about it is the fact that it’s such a clear pattern.”

Recording the calls of more than one mouse at a time is technically challenging, so scientists have had difficulty probing the connection between these squeaks and social behavior. In the new work, researchers used a technique to record calls from multiple mice over several hours1. They simultaneously recorded video of the mice and matched their calls to their behaviors, such as approaching or fighting their cagemates.

The researchers used this technique with sets of four control mice, mice missing the SHANK3 gene and mice with a mutation in the CACNA1C gene. The findings so far only apply to male mice. The researchers collected data on female mice but have not yet analyzed the results.

Neunuebel and his team placed sets of two male and two female mice in a cage for five hours. They recorded the animals’ behavior with a camera and their calls with eight fine-tuned microphones.

They identified which mouse made which calls by cross-referencing the times the different microphones picked up each call with each animal’s distance from the microphones at that moment. They used a computer-vision program to record and interpret the animals’ behavior. Then they matched each mouse’s behaviors to its calls.

They repeated the experiment several times among the typical, SHANK3 and CACNA1C mice. Each time, mice only interacted with others from their own strain. The researchers found clear patterns between the type of call and the mouse’s social behavior: For instance, they associated high-pitched squeaks with aggressive behavior.

They also found that the SHANK3 mice emit fewer vocalizations and have fewer social interactions than controls. But there is no difference between the CACNA1C mice and typical mice in the frequency of calls or in their social interactions. This conflicts with previous findings in rats with a CACNA1C mutation, which show that these mice make fewer squeaks than controls.

The work suggests that allowing mice to interact for long periods of time could reveal new information about social behavior and squeaks in autism mice, says Megan Warren, the graduate student in Neunuebel’s lab who presented the work.