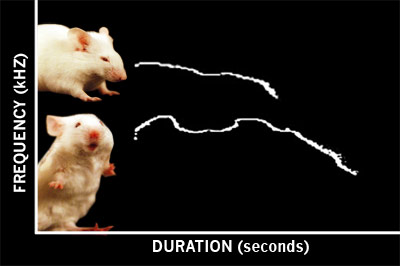 Mouse talk: Distinct ultrasonic cries that vary in duration and pitch may represent a repertoire of rodent communication.

Adult mice lacking the autism-linked gene SHANK2 emit fewer cries and do so at a lower pitch compared with controls, according to a study published 28 August in Behavioral Brain Research1. This suggests that, like people with autism, these mice may have problems with communication.

SHANK2 helps organizes the signaling junctions between neurons. Some people with autism have mutations in SHANK2, or in the related protein SHANK3, often in conjunction with other autism-linked mutations. Mice lacking SHANK2 show little interest in other mice and obsessively self-groom — traits that resemble the social deficits and repetitive behaviors seen in autism.

Autism usually features problems with language and communication. Mice emit high-pitched vocalizations that humans can’t hear, but whether these cries constitute communication is still under debate.

In the new study, researchers carefully documented the vocalizations of male and female juvenile and adult mice lacking SHANK2 and their typical littermates. They looked at the rate of vocalizations over time, and characterized five different types of calls based on their length and modulations in pitch.

Male and female adult mice lacking SHANK2 both make fewer vocalizations than controls do. These vocalizations tend to be shorter and emitted at a lower frequency than those of controls. These differences may be the result of alterations in the neurons involved in vocal motor function, the researchers say. However, it’s also possible that they reflect an atypical response to social situations.

There are no significant differences in the calls made by the mutant pups separated from their mothers and those made by controls.