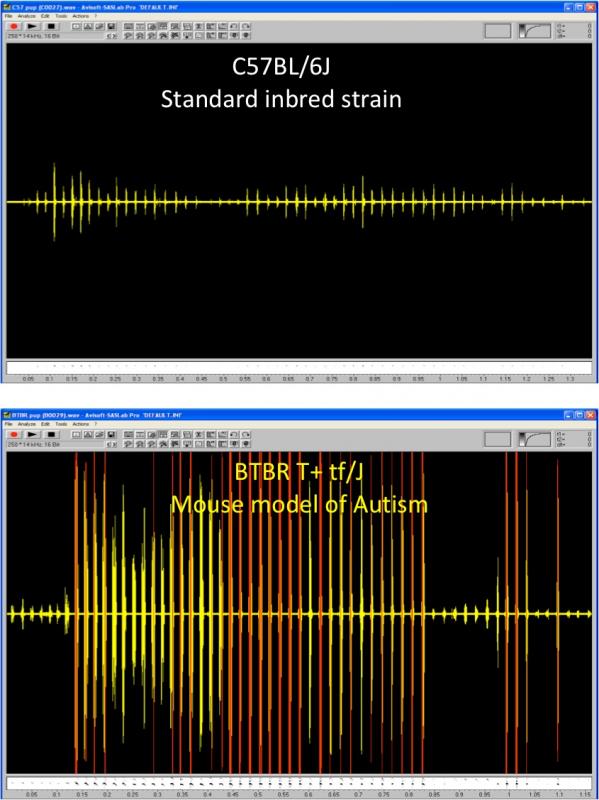 Researchers have identified an unusual pattern of vocalizations in a mouse model of autism that may resemble the atypical cries of infants with autism, according to a study published last week in PLoS ONE 1.

The distinctive calls in the mouse strain, called BTBR T+tf/J or just BTBR, add to the other autistm-like behaviors ― such as fewer social interactions and repetitive self grooming ― that researchers have previously observed in the strain.

In the current study, the researchers separated mice from their mothers after birth and analyzed the pitch and regularity of their calls.

The researchers found that the BTBR mice cry out to their mothers more frequently and over longer durations, and tend to use four categories of distinct calls compared with ten identified in three control strains.

The BTBR mice also emit harmonic calls ― which are made up of several pure tones at once ― more often than the control mouse strains.

“That to us is a very exciting finding,” says lead investigator Jacqueline Crawley, chief of the Laboratory of Behavioral Science at the National Institute of Mental Healthʼs intramural research program.

“We’re able to more comprehensively model the entire diagnostic syndrome rather than just the social component,” she says, “which is what most mouse models of autism have been modeling so far.”

In 2006, using a battery of mouse behavior tests, Crawley and others identified the BTBR strain as a potential model for autism2. The mouse behaviors, the researchers found, correspond with two diagnostic criteria for autism impaired social interactions and repetitive or restrictive patterns of behavior.

Crawley says the vocalization patterns correspond with the third: impairments in communication that show up through abnormal speech.

The link between mouse calls and human speech and language is still unclear. Some infants and children who are later diagnosed with autism emit harsh grunts early in life. More frequent cries in the BTBR mice may be similar to some babies who cry for long periods of time.

Crawleyʼs group plans to analyze the vocalizations in older BTBR mice to see whether these differences in calls last through the juvenile and adult period.

Vocalization studies in this model also open the door for future work to determine the genes and brain regions underlying the differences in social behavior that arise in the first few weeks of life.

“[This study] really begins to get to what autism is about,” says Garet Lahvis, an assistant professor of behavioral neuroscience at Oregon Health and Science University. “There are many other mouse models of autism that should be assessed using these measures.”