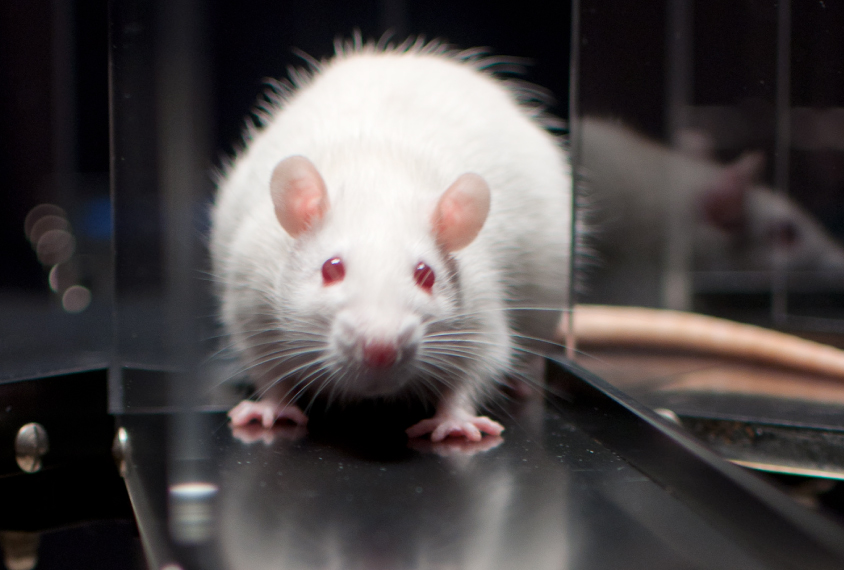 Rats with a mutation in CACNA1C, a gene linked to autism, make fewer happy squeaks while playing than controls do, and ignore other rats’ requests to play, a new study suggests1.

The findings indicate that the gene plays an important role in social communication.

CACNA1C codes for part of a protein that pumps calcium into neurons. Mutations in the gene have been tied to multiple conditions, including an autism-related condition called Timothy syndrome, as well as schizophrenia and bipolar disorder. Difficulties with social communication are a shared feature of all these conditions.

Mice lacking CACNA1C or carrying a mutated copy of the gene show unusual social behavior, such as lack of interest in another mouse2. The new study is the first to explore the gene’s role in the social behaviors of rats, which are more gregarious than mice.

Young rats frequently wrestle with and chase one another. Just before and during these behaviors, they emit high-pitched ultrasonic squeaks that are thought to be a rat form of laughter.

The new findings reinforce rats’ potential as autism models, says Jeffrey Burgdorf, research associate professor of psychiatry and behavioral sciences at Northwestern University in Evanston, Illinois, who was not involved in the work.

“Measuring these ultrasonic vocalizations is a great way to get at the social and emotional component of autism,” he says.

Wöhr and his colleagues placed pairs of control or mutant juvenile male rats in a cage outfitted with a video camera and an ultrasonic microphone. They allowed the rats to interact for five minutes on each of three consecutive days.

Mutant rats spend just as much time play-fighting as controls do, the researchers found. But they emit fewer high-pitched, 50-kilohertz squeaks as they play. Their cries are also quieter and have a higher peak frequency than those of controls. (The sounds are too high-pitched for people to hear; they are picked up by the microphone.)

Mutant rats use unusual ‘vocabulary,’ too. Instead of the ‘flat’ (fixed-pitch) or ‘mixed’ (multi-pitch) cries typically used by controls, they frequently emit ‘trills’ (rapidly alternating pitches), especially while wrestling and chasing.

To test rats’ perception of other rats’ cries, the researchers placed each rat in a maze with eight arms radiating from a central spot. One of the arms contained a speaker that played a recording of either white noise or rat squeaks.

Control rats avoid entering the arms closest to the speaker when it plays white noise, but prefer these arms when they hear rat squeaks. The mutant rats, by contrast, spend less time avoiding white noise or seeking out rat cries. Wöhr and his colleagues found similar results in rats missing SHANK3, another autism risk gene.

“So it seems like they do not only, let’s say, enjoy rough-and-tumble play less, but also they are less motivated to approach a potential play partner,” Wöhr says. The findings appeared 8 May in Disease Models & Mechanisms.

The mutant rats have no trouble with their hearing or ability to move, and don’t appear to be anxious. But other factors may confound the results, including differences between mutants and controls in their ability to interpret the meaning of the ultrasonic squeaks.

It’s also unclear why differences between the mutants and controls are restricted to squeaks and do not show up in the play itself, experts say.

“I think it’s a really interesting study,” says Rodney Samaco, assistant professor of molecular and human genetics at Baylor College of Medicine in Houston, Texas, who was not involved in the work. “But I think additional experiments are needed to help interpret the relationship between this and people with social behavior impairments.”

Some experts say the mutants may show differences in more sophisticated aspects of play. For example, the squeaks rats emit during play may signal whose turn it is to do something.

“Even though they’re overtly playing just as much, there’s a possibility that some of the things that make the play rewarding, such as turn-taking, may be diminished because of their reduced vocalizations,” says Sergio Pellis, professor of neuroscience at the University of Lethbridge in Calgary, Canada, who was not involved in the study.

The rats in the study were 21 to 34 days old, which is a strength of the study. “I like the fact that they look early in development, because that’s so relevant to autism,” says Anjali Rajadhyaksha, director of the Weill Cornell Autism Research Program in New York, who was not involved in the work.

Wöhr says he and his colleagues are analyzing data from juvenile female mutant rats. They are also looking at the mutant rats that interact with controls, to determine whether the genetic background of their cagemates influences the results.