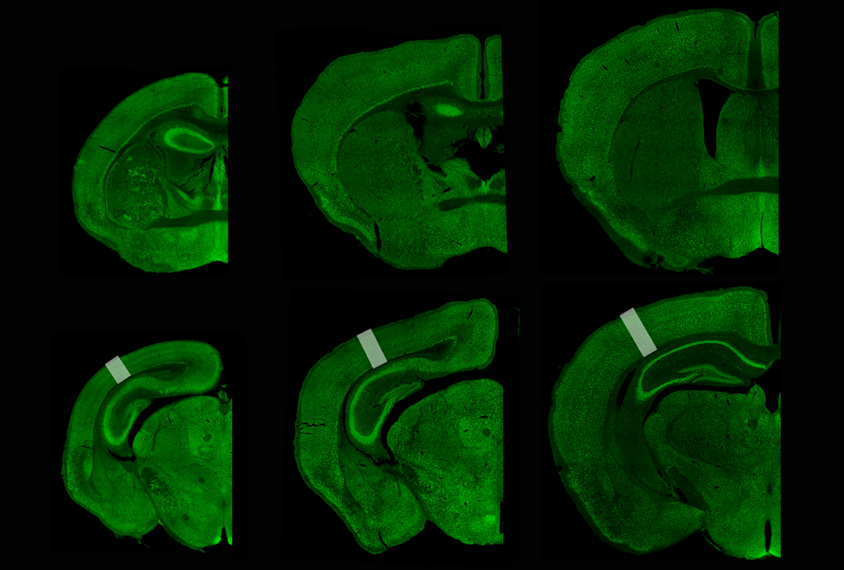 Big boost: A potential new gene therapy for Angelman syndrome leads to UBE3A expression throughout the mouse brain within days of a single injection.

One injection of a potential new gene therapy for Angelman syndrome forestalls many of the neurodevelopmental condition’s key traits, according to early tests in mice.

“While additional pharmacology and safety studies are needed, our viral vector can potentially provide transformative therapeutic relief with a single dose,” says lead investigator Benjamin Philpot, professor of neuroscience at the University of North Carolina at Chapel Hill.

Angelman syndrome, which affects about one in 20,000 children, is associated with significant developmental delays and, often, autism. It arises from mutations or deletions in the maternal copy of the UBE3A gene, which encodes a protein that helps regulate the levels of other important proteins.

There are no treatments specifically for Angelman syndrome, but several gene therapies are under development. One in clinical trials requires repeat injections in the spine and has shown serious side effects at high doses. These therapies all aim to restore UBE3A function in neurons. One challenge, though, is that neurons produce several variants, or ‘isoforms,’ of the UBE3A protein that vary slightly in length; in mice, for example, neurons make two isoforms in a ratio of about four short forms for every long one.

In contrast to other gene therapies, the new one generates short and long forms of the UBE3A protein at nearly the same ratio as is seen in mouse neurons. Such proportions “may be important for therapeutic efficacy,” says Eric Levine, professor of neuroscience at the University of Connecticut in Farmington, who was not involved in this study.

The key to achieving this isoform ratio was a careful design of DNA sequences, known as Kozak sequences, that help control the production of the proteins, Philpot says.

“It’s particularly cool that they can use a single vector to introduce two different protein isoforms with approximately accurate ratios,” says Stormy Chamberlain, associate professor of genetics and genome sciences at the University of Connecticut, who did not take part in this research. 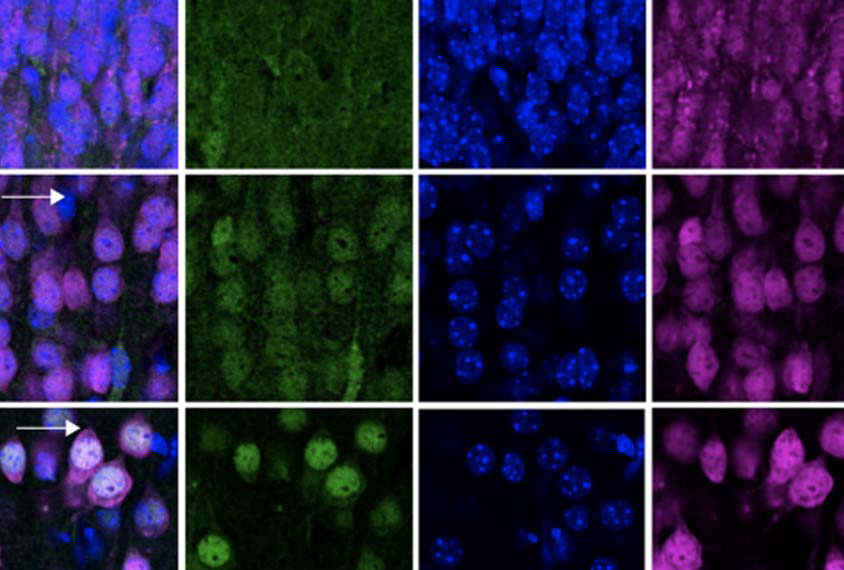 Regulator gene: UBE3A, which encodes a protein that helps regulate the levels of other important proteins, is expressed in mouse neurons (green).

Philpot and his colleagues developed their optimized version of UBE3A and incorporated it into a virus to deliver it into neurons. They injected this vector into hollow spaces, called ventricles, in the brains of newborn mice that lack the maternal copy of UBE3A and model traits like those seen in people with Angelman syndrome, including seizures.

The treatment led to UBE3A expression throughout the brain within days of the injection, the researchers found. The treated mice acted like wildtype mice in terms of digging, burrowing and nest-building and performed similarly on tests of motor learning, such as mastering how to balance on a rotating rod.

Treated mice also did not become as susceptible to experimentally triggered epileptic seizures and experienced less of the disruption to the hippocampus, the brain’s memory center, that such seizures often cause. Untreated mice developed the usual Angelman-like impairments. The scientists detailed their findings last month in the Journal of Clinical Investigation: Insight.

Although the viral vector used in this study is not ideal for human gene therapy, one “shouldn’t read too much into this choice,” Chamberlain says. This vector was designed for proof-of-principle experiments in mice; future research may employ gene delivery methods better suited for use in people, she notes.

And although mice have two major isoforms of the UBE3A protein, people possess three — one short form and one long form seen mostly in the cell nucleus, and one long form found mostly in the cytosol, the fluid that makes up most of a cell’s interior, says Ben Distel, associate professor of neuroscience at Erasmus University Medical Center in Rotterdam, the Netherlands, who was not involved in the study.

The new vector did not produce this cytosolic isoform, which makes up a minor fraction of a cell’s UBE3A protein, and whose function remains unclear. “Ideally, one would like to express all three human isoforms at their correct levels, although this might be technically very challenging,” Distel says.

The new gene therapy often led to UBE3A overexpression in the hippocampus, Philpot and his colleagues found. Overexpression of the gene is linked with the autism-related condition dup15q syndrome. But this overexpression was uncommon in other major brain structures and did not appear to affect the animals’ behavior.

“We have yet to see signs of adverse overexpression in our experiments, although we will continue to examine and test this,” Philpot says. “A general concern that applies to all gene therapies is long-term safety, but we have seen no adverse consequences in mice out to 6 months of age, the longest we have examined to date.”

Future research should test large animals and seek to deliver therapeutic DNA into only enough brain cells necessary to optimize the effects, says Elizabeth Berry-Kravis, professor of pediatrics and neurological sciences at Rush University Medical Center in Chicago, Illinois who was not involved in this study. Further work should also better quantify how much UBE3A protein is generated per cell to help ensure against issues with its overexpression, Chamberlain says.

“There are a lot of therapeutic options under development for Angelman syndrome,” she says. “Families have a lot to be excited about, but there is still much work and much waiting to be done before these are trialed in humans.”