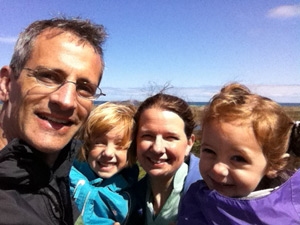 Family guy: Benjamin Philpot, here with his family on Chiloé Island off the coast of Chile, loves seeing the world through his daughters’ naiveté.

In November 2009, Benjamin Philpot’s research team experienced what all scientists hope for and most never experience: a Eureka moment.

The discovery began many months earlier with a wild idea for finding a treatment for Angelman syndrome, a rare disorder characterized by developmental delay, lack of speech, and seizures.

The syndrome is caused by mutations in a gene called UBE3A. In the neurons of healthy people, the copy of this gene inherited from the father is silenced and the maternal copy expressed. In individuals with Angelman syndrome, mutations or deletions on the maternal copy prevent the UBE3A protein from forming.

Philpot’s team at the University of North Carolina, Chapel Hill, set out to answer a question that had been floating around scientific meetings and review papers for years: What if a drug could un-silence the paternal copy?

Postdoctoral fellow Hsien-Sung Huang began in April 2009 with mice that carry a molecular tag that glows green if the paternal copy of UBE3A is expressed. Arthur Beaudet’s team at the Baylor College of Medicine in Houston created the mice and shared them with Philpot and others.)

Huang first figured out how to grow fragile neurons taken from the outer layers of the mutants’ brains in plastic plates. He then used these 384-well plates for high-throughput drug screening. That November, after screening about 500 compounds, he saw the telltale green glow: A cancer drug called topotecan had turned on the paternal copy of the gene1.

The entire approach was untested and risky, and one most postdocs would have shied away from, especially in these days of shrinking research budgets.

But Philpot, an eternal optimist, urges all of his young advisees to take on two projects: one safe and unsexy, another a high-stakes gamble. “It minimizes their exposure to risk, but gives them an opportunity to achieve a great height,” he says.

This sort of smart risk management has propelled the energetic 42-year-old from one adventure to another, whether it’s attempting new lab techniques, learning to rock climb or taking his family to see Chilean volcanoes. His vigor for science has led to major discoveries for Angelman syndrome and for the wider autism spectrum.

“It’s the hallmark of an agile scientist not just to work on the same old problems for 40 years, but to say, where does the science lead you?” says Michael Ehlers, chief scientific officer of neuroscience at Pfizer and Philpot’s friend and collaborator.

Philpot was inspired to study neuroscience as an undergraduate at Duke University in Durham, North Carolina, thanks in large part to Steve Nowicki, his introductory neurobiology professor. “It was almost like going to watch the Oprah Winfrey show, [Nowicki] was so dynamic,” Philpot recalls.

Philpot did his graduate work in Peter Brunjes’ lab at the University of Virginia in Charlottesville, studying how a young rat’s experience with smells can shape the olfactory circuits of its brain. “This is where I started appreciating how powerful our sensory experiences are in brain development,” Philpot says. 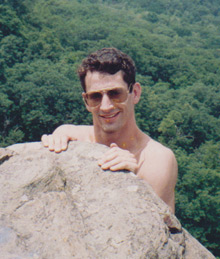 Safe thrills: In graduate school, Philpot often went rock climbing when he wasn’t in the lab.

One day a friend convinced Philpot to try rock climbing at the nearby Moorman’s Boulders. He loved it and was soon going every other day. “It was a thrill, but also I had confidence as far as using ropes, so you always do have this safety net.”

The extracurricular activity in no way hampered his productivity: He published eight papers as a graduate student — a record for Brunjes’ lab.

“[Philpot] is one of the most energetic people I’ve ever known in my whole life,” Brunjes says. “He would work long hours in the lab, get tons of things done, then go out and do 47,000 other things. Then he’d come back in and say, ‘OK, got any more for me to do?’”

Later, as a postdoc in Mark Bear’s lab, then at Brown University in Providence, Rhode Island, Philpot studied how experience shapes not only brain anatomy, but the electrical function of neurons and the strength of their connections, or synapses.

Fellow postdoc Kimberly Huber fondly remembers their morning routine: Philpot would bound into the lab around 8 a.m. and start asking her questions while she was still waking up. “Ben doesn’t need coffee,” she says, chuckling. “We used to joke that he didn’t have any adenosine receptors in his brain,” referring to the receptors that bind to caffeine.

In 2004, Philpot launched his own lab in North Carolina and began collaborating with Ehlers. At the time, Ehlers was studying ubiquitin, a protein that helps cells clear other proteins from the cell. Ehlers had stumbled on Angelman syndrome because UBE3A encodes an enzyme that activates ubiquitin. Children with the syndrome, Ehlers learned, grow normally for the first year of life and then suddenly stop hitting developmental milestones such as learning to speak.

“This immediately led to a discussion with Ben, where I said, ‘Gosh, your lab is really expert in this kind of early developmental experience,’” Ehlers recalls.

Philpot had never heard of Angelman syndrome before, but his decision to collaborate with Ehlers transformed his research.

Philpot is now one of the world’s experts on the neurobiology of Angelman syndrome. He has met several hundred people affected by the disorder, and their families, at conferences sponsored by the Angelman Syndrome Foundation.

Once at an Angelman conference, a parent asked Philpot, “Look, if we can put a man on the frickin’ moon, why can’t we cure Angelman?”

Ever the optimist, Philpot says the two projects aren’t all that different.

“They’re both engineering problems,” he says. “There is a way to develop a therapy, however complex.”

Since their discovery involving topotecan, Philpot’s team has been trying to figure out the lowest dose of the drug needed to activate the paternal copy of UBE3A, as well as testing about 30 other related compounds.

Even if it turns out to be inappropriate for treating Angelman, the approach could be useful for other autism-like disorders, he says. Rett syndrome, for example, arises because an X chromosome gene called MeCP2 is randomly inactivated in some cells.

Philpot’s team is screening for drugs that could switch the gene back on. “We could end up getting a cure from one of these shot-in-the-dark ideas.”