In April 2020, as the world went into lockdown and laboratories shuttered, Elizabeth Berry-Kravis was on the move.

Her team’s clinical trial of a potential treatment for fragile X syndrome — one of the most common inherited forms of intellectual disability and a leading genetic cause of autism — was nearly complete. But she and her colleagues had to collect critical data from two participants in the coming days. One man had been scheduled to travel from Oklahoma to Berry-Kravis’ lab at Rush University Medical Center in Chicago, Illinois, in late April.

But the pandemic derailed those plans. So Berry-Kravis, professor of child neurology, and two study coordinators hopped in her car for a more than 10-hour drive through pouring rain to meet him at his farm. Wearing masks and wielding disinfected tablets, the researchers tested his cognition in a camping trailer. A few hours later, they retraced their nearly 700-mile route north, returning to Chicago around 2 a.m. The next day, the exhausted researchers flew to Florida to meet up with another trial participant. “But we got the data!” Berry-Kravis says.

The rationale for the new drug dates back to analyses Berry-Kravis, 63, did more than 30 years ago. In the late 1980s, she made an unexpected discovery linking fragile X syndrome to a learning mechanism involving the signaling molecule cyclic AMP. The findings catapulted Berry-Kravis into the fragile X field.

Since then, Berry-Kravis has authored more than 250 peer-reviewed publications. Her productivity is unparalleled, her colleagues say. “She gets more stuff done than any other researcher I know,” says Randi Hagerman, medical director of the MIND Institute at the University of California, Davis.

No matter how busy she is, Berry-Kravis wakes up to run 4 to 6 miles almost every morning, something she has done since running track in high school. She has completed two marathons, including one in 2014 that she ran as a symbol of the long road to fragile X drugs.

She shows endurance in both races. She is best known for her efforts to apply lessons from unsuccessful clinical trials in fragile X to new studies of the condition. “Her work has moved the needle on targeted treatments and translational research in fragile X syndrome perhaps more than any other single person,” says David Hessl, professor of clinical psychiatry at the University of California, Davis.

The 2020 trial data would move that needle once again. They showed promise for an experimental drug for fragile X syndrome after more than a decade of failed attempts. 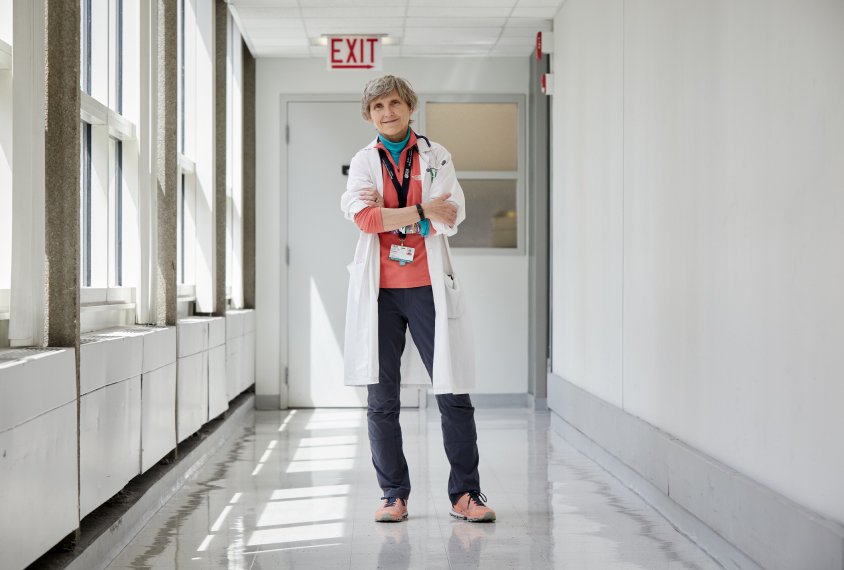 Staying the course: Elizabeth Berry-Kravis has wanted to be a neurologist since childhood.

Berry-Kravis has known since seventh grade that she wanted to be a neurologist. Never mind that women made up less than 10 percent of doctors in the United States back then. “I had been interested in how the brain wires and connects and speaks to itself,” she says.

Among the first few women to enroll at the University of Notre Dame in Indiana in 1975, Berry-Kravis earned a B.S. in chemistry in 1979 and then an M.D.-Ph.D. from the University of Chicago for her studies of molecular pathways regulating cyclic AMP in neurons.

In the 1980s, several studies had linked low cyclic AMP with impaired learning in fruit flies and sea slugs. So in 1987, during her pediatric neurology fellowship, Berry-Kravis decided to test whether cyclic AMP deficiency might also relate to cognition in people. At first, she aimed to study people with a rare endocrine condition called pseudohypoparathyroidism, who are known to have low cyclic AMP. She decided to also measure cyclic AMP in people with fragile X syndrome, initially as a control group.

To her surprise, she found that blood cells from some people with fragile X syndrome had even less cyclic AMP than those from people with pseudohypoparathyroidism, hinting that lack of the signaling molecule might be key to understanding fragile X. She submitted an abstract to the 1990 Child Neurology Society meeting — only to realize, upon hearing it was accepted, that the meeting coincided with her second child’s due date.

As fate would have it, her son was born early. So within a few days of giving birth, she popped into her lab to do the final cyclic AMP assay, and a few days after that, gave her talk.

To confirm and expand her initial findings — for example, to examine different cells and tissues — Berry-Kravis needed to recruit more people with fragile X, so she reached out to local support groups. At their meetings, Berry-Kravis learned about families’ confusion about the science. A key 1991 paper had just identified FMR1 as the culprit gene in fragile X, but its inheritance patterns were baffling. Mothers who did not have fragile X were being told they were carriers, and they did not understand why.

Berry-Kravis explained that it depends on the number of repeated DNA segments the gene contains. Typical FMR1 has fewer than 45 of these ‘CGG repeats.’ Having more than 200 of them turns off the gene, suppressing production of its protein, FMRP, and leading to the syndrome. But the gene can expand over generations: Mothers with 55 to 200 CGG repeats have what is known as a premutation. They may not have fragile X traits, but their children are more likely to. At one meeting, Berry-Kravis says, “I wound up staying there for four hours.”

Families were also frustrated about the lack of care. “As I met the families, it was clear they were desperate to have a place to go where someone would know everything about fragile X syndrome,” Berry-Kravis says. So in 1991 she and her team set up a fragile X clinic. It grew rapidly, fueled by word of mouth about Berry-Kravis’ expertise, and now treats more than 700 people. “She is so knowledgeable,” Hagerman says. “She also has a great memory and sensitivity to what the families are going through.” 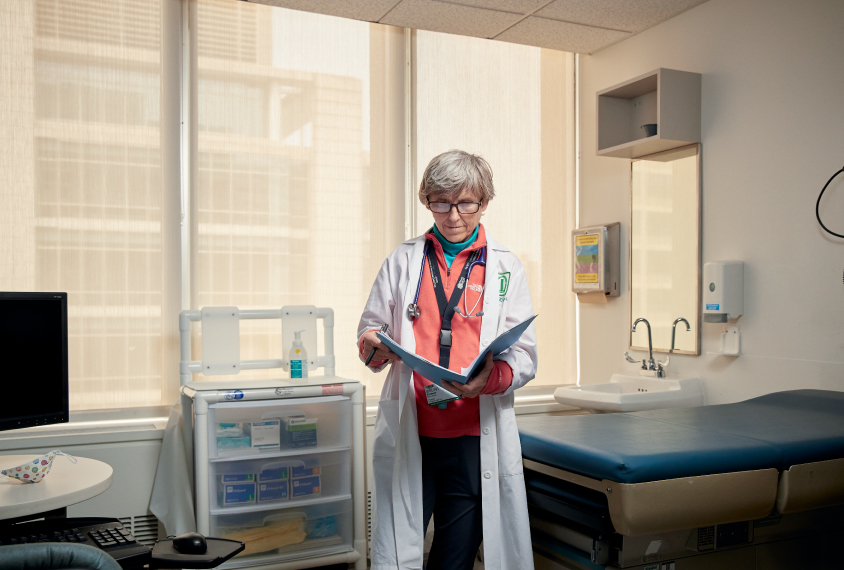 End game: Berry-Kravis has devoted the bulk of her career to finding treatments for her patients with fragile X syndrome.

In the mid- and late-1990s, Berry-Kravis presented her findings linking low cyclic AMP to fragile X syndrome at various conferences. “This was such a novel thing,” she says. Whereas much of the field was focused on genetics, “this was an actual mechanism for why fragile X neurons were not working right.” In 1998, she and her colleagues published a paper in which they showed that overexpressing FMR1 in a neurotumor cell line could rescue the cells’ cyclic AMP deficit — providing support for the involvement of this pathway in the cognitive difficulties of fragile X.

If a lack of cyclic AMP underlies fragile X syndrome, Berry-Kravis reasoned, then raising levels of the molecule might be a way to treat it. She considered the strategy of blocking phosphodiesterase, an enzyme that breaks down cyclic AMP — but quickly dismissed the idea. Phosphodiesterases are present throughout the body, so inhibiting them would likely lead to serious side effects. “There was no drug that would do that without causing major havoc,” Berry-Kravis says.

In the early 2000s, Berry-Kravis saw that fragile X research was converging on another drug target: a receptor called mGluR5, which sits on the surface of neurons. FMRP acts as a brake on parts of the mGluR pathway, which controls protein production. In people with fragile X, the absence of FMRP leads mGluR signaling — and protein synthesis — to proceed unchecked, suggesting that blocking mGluR could correct the problem.

By 2012, studies from more than 20 labs showed that mGluR inhibitors could reverse fragile X traits in mice, rats and flies. “It was probably the largest body of evidence that any genetic disorder has ever amassed on a type of drug reversing the disorder by the time we went to trials,” Berry-Kravis says. What is more, a few of these drugs looked promising in early-phase human testing.

Yet mGluR blockers did not show benefit in larger human trials, which Berry-Kravis and Hagerman helped design. In 2014, both Novartis and Roche disbanded their programs.

But Berry-Kravis had not given up on the drugs. Instead, she began to question the way they were vetted. For starters, the trials enrolled adolescents and adults, but fragile X is a developmental condition. “You probably have to treat kids to find out whether the drug works,” she says. And although learning difficulties are central in fragile X, the trials did not assess cognitive outcomes. “We were like, ‘Hey, wait a minute, what were we doing? We don’t even know if these drugs don’t work or if we just did the trials wrong,’” Berry-Kravis says.

In 2015, Berry-Kravis — working with Hagerman, Hessl and others — applied for a grant from the U.S. National Institutes of Health to fund “the trial we wanted Novartis to do,” she says. The NeuroNEXT study is testing Novartis’ mGluR blocker AFQ056 in 3- to 6-year-old children with fragile X syndrome. All children in the trial receive intensive language treatment, and the researchers plan to assess whether outcomes are better in children who are taking the drug than in those given a placebo.

Alongside her research, Berry-Kravis co-directs the Molecular Diagnostics Section of the Genetic Laboratory at Rush University, which tests people for fragile X and other genetic disorders. She also works as a doctor about 20 hours per week at the fragile X clinic. “Most people would tell you that I don’t sleep as much as other people,” Berry-Kravis jokes. (She gets just four to six hours of sleep per night.)

Her naturally high energy gets a boost from another habit: Tab soda. She used to chug three to four cans a day but has capped daily consumption at two cans since production of the caffeinated drink stopped last December. 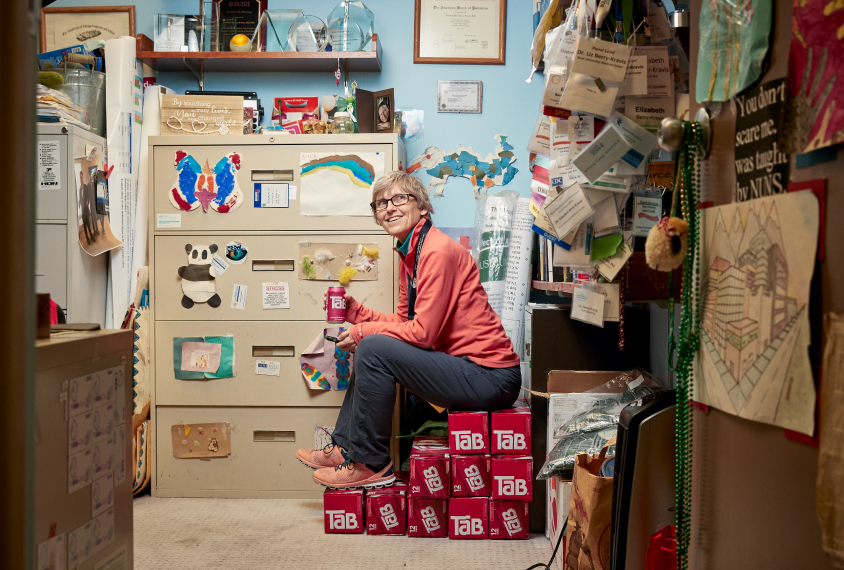 Office supplies: Berry-Kravis is working with the #SaveTaB community to bring back the drink that has fueled her for decades.

Her tireless drive is what kept the clinical trial on track in April 2020. The drug under scrutiny was a re-imagined phosphodiesterase inhibitor. By solving the crystal structure for a phosphodiesterase important for brain function, scientists from the biotech firm Tetra Therapeutics were able to design a drug that blocks only this form of the enzyme. The specificity radically improves its safety profile, says Mark Gurney, Tetra’s chief executive officer.

In April 2021, Berry-Kravis, Gurney and their colleagues published the results of the trial: significant improvement in language, daily function and cognition in 30 men with fragile X syndrome. For Berry-Kravis, it was a result three decades in the making — and yet the potential therapeutic still has to clear large-scale trials. To the fragile X community, she recommends patience in the search for treatments. “We need to have the stamina of a marathoner,” she says.