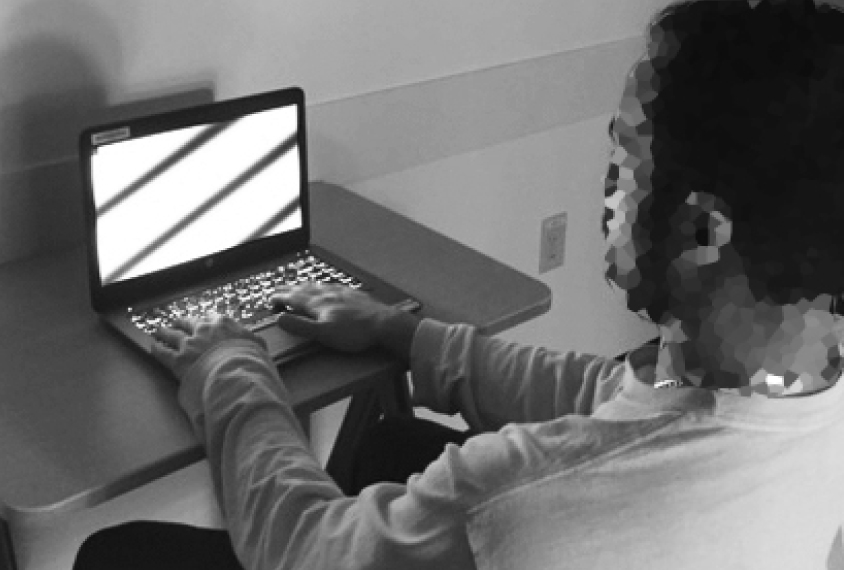 Blurred lines: Men with fragile X syndrome have trouble distinguishing between sets of lines moving in opposite directions.

The motion perception difficulties seen in people with fragile X syndrome, a leading cause of autism, stem from a faulty visual circuit in the brain, a new study suggests1.

Activating certain neurons in this circuit improves motion perception in a mouse model of the condition. The results indicate a possible treatment for the difficulties in people with fragile X syndrome.

“We uncovered a deficit in one particular cell type in the brain,” says lead investigator Carlos Portera-Cailliau, professor of neurology and neurobiology at the University of California, Los Angeles. “Now we have a handle on potential therapies.”

The hallmark of fragile X syndrome is intellectual disability, but many people with the syndrome have problems with perceiving sensory information, including motion.

“Most of the activities that we do, even recognizing people’s facial expressions, involves recognizing movements,” Portera-Cailliau says.

The study shows that fragile X mice and people with the syndrome have similar difficulties on a visual-discrimination task. This suggests such tasks could be used to measure improvement in trials of fragile X drugs.

“One impediment in the past has been that we often don’t have robust translational measures,” says Andreas Frick, group leader at Neurocentre Magendie in Bordeaux, France, who was not involved in the work. “It’s important to have behavioral tasks that are robust and can be applied like this to mouse models and humans.”

The researchers showed the mutant mice two videos of parallel lines in black and white. In one video, the lines move diagonally across the screen from top left to bottom right; in the other, they move from top right to bottom left.

The researchers limited the mice’s access to water and then trained them to lick a water port when they see one of the videos but not the other. Fragile X mice need six daily sessions to distinguish between the videos, compared with three for controls.

The team then made the task progressively harder by decreasing the angle between the lines in the two videos. Mutant mice begin to perform poorly when the lines differ by 15 degrees, but control mice continue to perform well until the angle narrows to 7.5 degrees.

The researchers inserted chemical sensors into the mice’s visual cortex to measure neuronal activity as the mice viewed the videos. Subsets of neurons in the visual cortex are known to fire in response to specific orientations of lines.

The mutant mice’s neurons fire at the same rate as those in controls, the researchers found. But the mutants have a smaller proportion of angle-sensitive neurons, and those fire less selectively than they do in controls.

Portera-Cailliau’s team then turned their attention to parvalbumin neurons, which dampen the activity of other neurons, including the angle-sensitive neurons.

In fragile X mice, a smaller fraction of parvalbumin neurons fire in response to visual stimuli, and they fire less frequently than those in controls, the researchers found. When the researchers activate parvalbumin neurons, the firing of the angle-sensitive neurons normalizes, and the mice learn the motion perception task faster. The results appeared 24 September in Nature Neuroscience.

The findings challenge the assumption that learning deficits must stem from problems in brain regions directly involved in learning and memory, says Gavin Rumbaugh, associate professor of neuroscience at the Scripps Research Institute in Jupiter, Florida, who was not involved in the study.

“If our brain can’t interpret signals from our environment correctly, then our areas of the brain that make and store memories won’t actually be able to function properly, because they’re not receiving the proper information,” he says.

Portera-Cailliau’s team asked eight men with fragile X syndrome to look at the same stimuli they had shown the mice and to indicate whether the lines moved left to right or right to left.

“It’s exciting that the visual paradigms used in the animal and human studies are pretty similar,” says Caroline Robertson, assistant professor of psychological and brain sciences at Dartmouth University in Hanover, New Hampshire, who was not involved in the study. “But an interesting open question is whether these insights will hold for other forms of autism.”

Portera-Cailliau says his team is exploring whether similar problems occur in other mouse models of autism. He is also studying the mechanisms underlying the circuit defects in the fragile X mice.