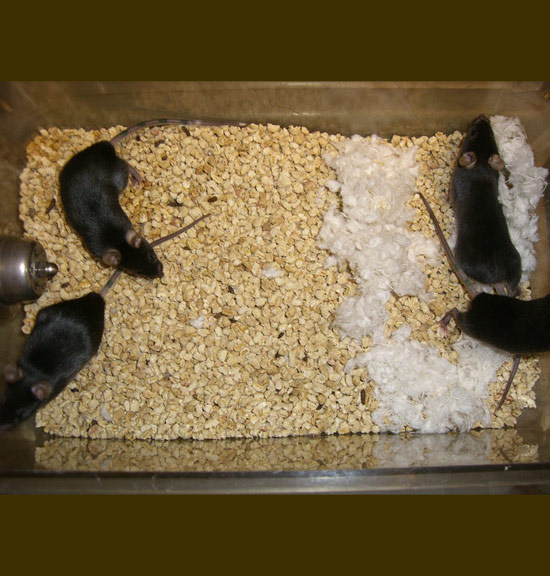 Family feud: Deleting the fragile X gene from six different strains of mice has created six phenotypes, including one that’s nearly indistinguishable from controls (both seen above).

Fragile X syndrome is caused by the complete or partial loss of FMR protein, which results from a full or partial mutation of the FMR1 gene. People with the syndrome combine varying degrees of intellectual disability with seizures, irritability, hyperactivity, anxiety or self-injurious behavior. Up to one-half of people with fragile X syndrome also meet diagnostic criteria for autism.

Researchers suspect that the wide range of fragile X symptoms is the result of differences in genetic, environmental and perhaps epigenetic factors — which affect gene expression without altering DNA2.

The new study probes the first of these variables by investigating the effects of a total deletion of the FMR1 gene in different strains of mice.

“The bottom line is that no two genetic backgrounds produced the same behavioral pattern,” says Richard Paylor, professor of neuroscience at Baylor College of Medicine, and lead investigator on the study. “The data suggest that the genetic background dictates the phenotype more than the actual mutation [does].”

This is not news to people with long experience in the field, notes Valerie Bolivar, director of the Mouse Behavioral Phenotype Analysis Core at the Wadsworth Center, New York State Department of Health, who was not involved in the study. “Old-fashioned mouse people know that inbred strains are different,” she says.

Paylor’s study is unique, however, because his team did not use inbred animals. Instead, the researchers created first-generation mice by crossing female mice from a B6 background — a moderately social strain — in which the FMR1 gene has been deleted, with male mice from five other strains.

The researchers then assessed the behavior of the mice at 2 to 3 months of age using a wide range of tests. “We basically decided to throw the kitchen sink at them,” says Paylor.

Significant differences among the strains emerged on almost every measure, from the distances the mice traveled in open-field tests to tasks assessing learning and memory, anxiety and depression, and social behavior. “On some of the assays we got opposite effects even though the mutation is the same,” says Paylor.

Still, when the mutant mice were compared with controls, an overall fragile X phenotype emerged. The mice carrying the FMR1 deletion are typically hyperactive, less social and less sensitive to startle tests of sensory response than are controls.

Most importantly, the B6/DBA hybrid mouse, one of the six first-generation strains created by the researchers, mimics all three of the core deficits of autism: behaving standoffishly with familiar partners, emitting few vocalizations — the mouse equivalent of communication deficits — and compulsively burying marbles.

“That hybrid was the only one with any sign of repetitive behavior, which gave us more confidence that there was autistic-like behavior in that line,” Paylor says.

The study has several important implications, says David Threadgill, professor of genetics at North Carolina State University, who was not involved in the work. “What’s starting to be appreciated more and more is that the context of these mutations is going to be very genetic context-dependent,” he says. “This study shows that even in a gene known to be tightly linked to a particular disease, there are profound differences in phenotype based on genetic background.”

Threadgill notes that the National Institutes of Health is investing tens of millions of dollars into making animal models of numerous diseases by deleting various genes, all derived from the B6 genetic background — an approach the new study calls into question. “How much information on potential disease models is not going to be discovered,” he says, “because of the way that process is set up?”

Candidate genes for various disorders have been dismissed because studies in a single strain of mice haven’t revealed a disease phenotype that might merit a second look, he says. “Don’t rule out the importance of the gene until you’ve exhaustively looked at various genetic contexts.”

Conversely, an animal’s genetic background may mask the disease consequences of a mutation. “Understanding that mechanism might lead to some sort of therapeutic intervention that would mimic that [protective effect],” he says.

Despite the clear utility of the multi-strain approach, it is probably not feasible for researchers to use it in each and every study. “It’s very time-consuming,” says Paylor, pointing out that it took his lab two years to carry out the study.

It’s also expensive. “These are a lot of lines for someone to buy or keep in their facility,” Bolivar points out. “Most people don’t have the mouse space or the money.”

Still, it’s important for researchers to keep in mind that “modifier genes for these complex phenotypes are going to be critical,” she says. “You can’t just slap a mutation on a B6 background and run it. That’s not going to get you the whole story.”