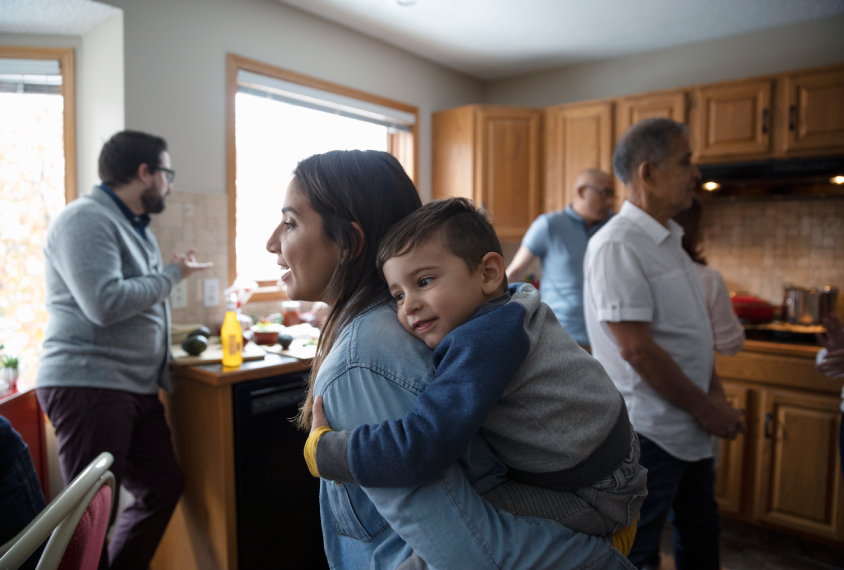 Reliable risks: A study across multiple generations suggests that certain chronic conditions do not contribute to autism risk via the mother's genes.

About 81 percent of autism risk comes from inherited genetic factors, according to an analysis of more than 2 million children from five countries, published today in JAMA Psychiatry1.

The new study improves upon the previous work by analyzing multiple generations of families from several countries.

“It’s a huge study, and it’s reflecting the kind of diagnostic culture of multiple independent countries,” says study researcher Joseph Buxbaum, professor of psychiatry at the Icahn School of Medicine at Mount Sinai in New York. “This is the best estimate we’re likely to see in the near future.”

The researchers also examined other factors tied to autism. For instance, an estimated 18.1 percent of autism risk arises from environmental factors that are not shared among family members. This includes noninherited, or de novo, mutations, Buxbaum says. The team also looked at factors that are shared among family members, such as the home environment, but found that they generally do not contribute to autism risk.

The analysis also shows that certain chronic conditions do not independently confer risk for autism via the mother’s genes.

However, the researchers did not account for illnesses such as fever during pregnancy, says Brian Lee, associate professor of epidemiology and biostatistics at Drexel University in Philadelphia, Pennsylvania, who was not involved in the work. Studies have identified close links between autism and several maternal factors, such as infection during pregnancy.

The algorithms the researchers used to estimate risk also overlook other factors tied to autism risk, Lee says, including gene-environment interactions and changes to gene expression via chemical modifications of DNA.

“The [algorithms] are the best available models that we have, but they are fairly crude,” he says. “There are a lot of things going on [in autism] that this particular study design can’t assess.”

In all, the sample includes 2,001,631 children, including 22,156 diagnosed with autism. The majority of the children live in Denmark, Finland or Sweden; the researchers included these children in the main analysis and analyzed those from Western Australia and Israel separately.

They also looked for records of autism diagnoses among the autistic children’s siblings, half-siblings and cousins. And they used the same databases to identify the children’s parents and grandparents and build family trees.

Several previous studies estimated autism’s heritability by analyzing twins, but those studies may be limited by factors specific to twins, such as their increased likelihood of being born premature. The new study benefits from the fact that it includes non-twin siblings and cousins, says Jeremy Veenstra-VanderWeele, professor of psychiatry at Columbia University, who was not involved in the research.

The researchers used a statistical model and estimated that about 81 percent of autism risk stems from genes children inherit from their parents. The estimate has a small range of uncertainty, meaning it is more reliable than previous estimates, Veenstra-VanderWeele says.

Likewise, the estimate for heritability from the Western Australia data is 54 percent, and again the range for this estimate is wide. These discrepancies may stem from the fact that the number of autistic participants in the study is small, or they may generally reflect differences among countries’ diagnostic standards for autism, the researchers say.

“Is that just noise in the system, or is it that there’s something really different about how autism is diagnosed in those countries? That’s an interesting question,” Buxbaum says.

Differences in population genetics between Finland and other European countries may also explain why the genetic contribution to autism is smaller in Finland than in the other countries.

Lee says these explanations are valid but that he’s “not entirely comfortable with the way [the researchers] waved away Finland’s results.”

Even so, the primary findings are consistent across the three other countries — “a real strength of the paper,” says Tychele Turner, senior research fellow in Evan Eichler’s lab at the University of Washington in Seattle.

“It’s always good when you have a finding in one cohort,” Turner says. “But you feel much stronger about it when you see that replicated in multiple different cohorts.”