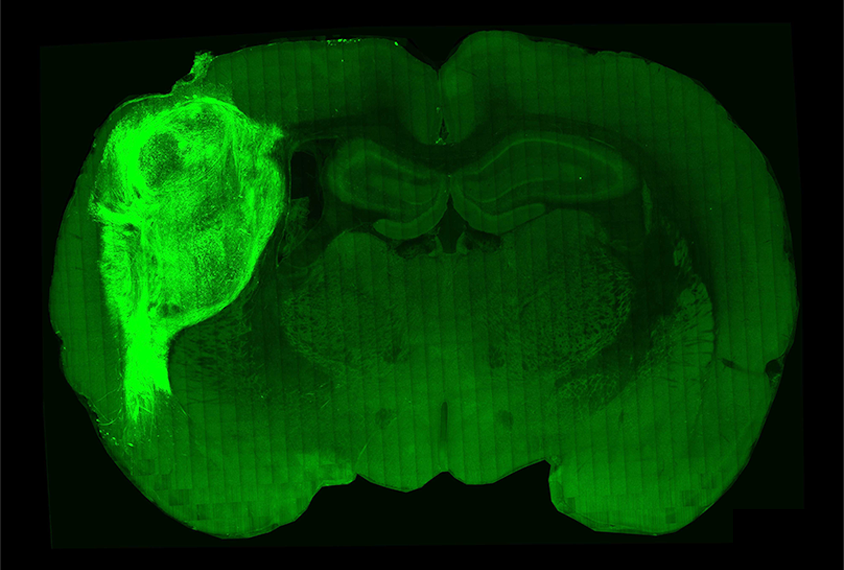 Human cortical organoids transplanted into the brains of newborn rats sprout more mature neurons and form more complex circuits than the usual dish-grown organoids do, a study published today in Nature reports. The transplants also integrate into the animals’ brains and influence their behavior, the study shows.

Cortical organoids grown from the cells of people with autism-linked conditions are popular models for studying brain development and testing therapies. But their simplicity limits their usefulness: The cell clusters only partially mimic the structure of the cerebral cortex; they don’t form complex circuits; they grow slowly in culture; and their neurons tend to remain immature.

By contrast, the transplanted organoids continue to mature, likely due to two factors that cannot exist in a dish, says lead investigator Sergiu Pasca, professor of psychiatry and behavioral sciences at Stanford University in California.

“We know that activity very early in development is very important for the maturation of circuits,” Pasca says.

Pasca’s team initially grew organoids from the skin cells of non-autistic people and transplanted the clusters into the somatosensory cortex of rats during their first week of life. Seven to eight months later, the organoids’ neurons had grown significantly thicker and longer than those of organoids cultured in lab dishes. The cells also had more branches and spines, and formed connections and exchanged signals with neurons throughout the rats’ brains.

At that time point, gene-expression patterns in the grafted organoids matched maturity levels seen in human fetuses during the third trimester. The transplants also showed electrophysiological responses to whisker stimulation, suggesting the cells had functionally integrated into the rats’ somatosensory cortex.

In another demonstration of that integration, the team then used optogenetics to activate neurons in the organoids and trained the rats to associate that neuronal activity with access to a drink of water from a spout. Two weeks later, the rats spontaneously sought a drink whenever their organoid neurons were stimulated.

“While this is not the first study of transplanting human brain organoids into animal models, it has done most extensive characterizations and shows that indeed human brain organoids can functionally integrate into rodent brain circuitry, including contribution to animal behavior,” says Hongjun Song, professor of neuroscience at the University of Pennsylvania in Philadelphia, who was not involved in the work.

Another round of experiments used organoids derived from people with Timothy syndrome, a condition caused by mutations in the CACNA1C gene that often involves heart problems, autism, epilepsy and intellectual disability. The team grafted a Timothy syndrome organoid to one side of the brain in a newborn rat, and an organoid from a neurotypical control on the other side.

The study convincingly shows that implanting organoids onto living animal brains can yield more faithful models for studying human brain conditions, says Jason Stein, associate professor of genetics at the University of North Carolina at Chapel Hill, who was not involved in the work. “The advanced maturity may actually be able to help you study disease-associated phenotypes.”

The lessons learned from this study could help scientists develop better dish-grown organoid models, Stein says. And the Timothy syndrome rat-organoid hybrids may be particularly useful for testing candidate drugs, Pasca adds — an endeavor his team has already begun.

Other future experiments might introduce assembloids, human organoid models that can contain multiple different types of brain cells, Pasca says. Such transplants could more faithfully represent human brain regions and activity, and could be designed to contain varying ratios of inhibitory and excitatory neurons to model the excitation and inhibition imbalance thought to be involved in autism, he says.

Studying organoids in the context of a living animal could also help to reveal whether phenotypes observed in cells actually matter in terms of behavior, he says. “Having a circuit-level and behavioral readout for human cells is essential for studying behaviorally defined conditions.”