Merging the 3D clusters in a lab dish at will — “almost like Legos” — can reveal how defects arise as neural circuits form, says lead investigator Sergiu Pasca, associate professor of psychiatry and behavioral sciences at Stanford University in California. It can also offer insight into the contribution different brain regions make to neurodevelopmental conditions.

The approach builds on a technique that turns skin cells into neurons, which then self-organize into round clusters called spheroids. Pasca and his team already knew how to build spheroids that mimic the cerebral cortex, an autism-linked brain region that controls such functions as attention, cognition and language. But they didn’t know how to generate spheroids that resemble the striatum, a cluster of neurons that controls movement, among other things, and has also been implicated in autism.

In the new study, the researchers developed a cocktail of growth factors and other molecules that enabled them to concoct spheroids that mimic the striatum’s structure and electrophysiological properties. They then put these spheroids in a dish together with cortical spheroids. Within 72 hours, the two had merged to form a cortical-striatal ‘assembloid.’

The assembloids, which measure about 5 millimeters in diameter, remained fully functional for at least 150 days, Pasca says. The study was published in December in Nature Biotechnology.

The cortical-striatal circuit has been implicated in autism, schizophrenia and other neurodevelopmental conditions. To study its role in autism-linked conditions, the researchers made striatal spheroids from the skin cells of three people with Phelan-McDermid syndrome.

This syndrome, often characterized by muscle weakness, intellectual disability and autism, is caused by a deletion in the 22q13.3 chromosomal region or by a harmful mutation in SHANK3, a gene involved in organizing neuronal connections. Mutations in SHANK3, which is highly expressed in the striatum, are also found in some people with autism and intellectual disability. 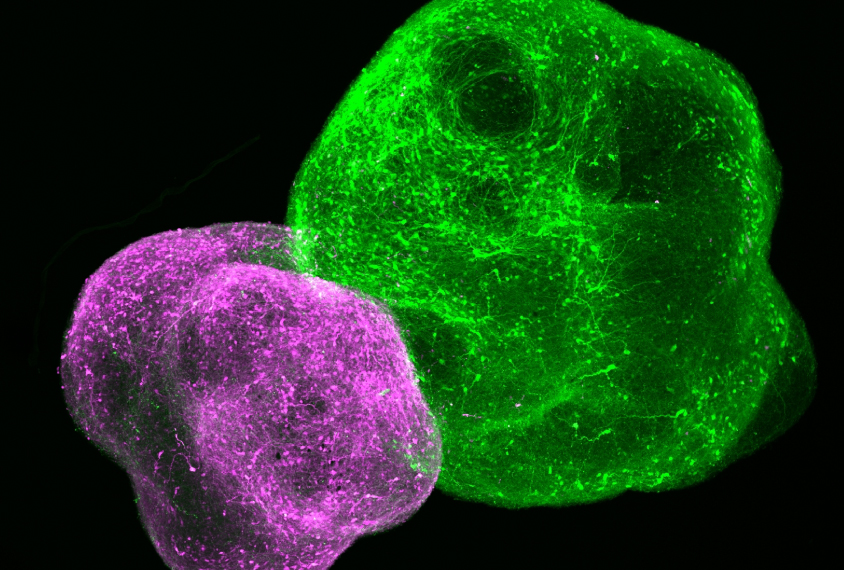 Like Legos: Clusters of neurons cultured from different brain regions snap together to form ‘assembloid’ models of neural circuitry.

Striatal spheroids derived from people with Phelan-McDermid syndrome did not show any difference in calcium signaling compared with spheroids derived from controls, the researchers found. But when the team generated the cortical-striatal assembloids, striatal neurons from individuals with Phelan-McDermid syndrome fired more frequently than comparable neurons from controls.

This increase in activity had been reported in cortical neurons from mice and people with SHANK3 mutations, but not in human striatal cells, Pasca says. He and his team are now using cortical-striatal assembloids to explore the mechanisms underlying this heightened excitability.

Many other spheroid combinations are possible, Pasca says. In a study published in December in Cell, he and his team merged three types of spheroids — mimicking the cerebral cortex, spinal-cord tissue and skeletal muscle — to model the critical components of the circuit controlling voluntary movement. Stimulating the cortical spheroids triggered contractions of the skeletal-muscle spheroids, the researchers found.

This type of assembloid could help scientists study the effects of neuronal differences in deep layers of the cortex, which connect to the spinal cord and have been implicated in autism, Pasca says. Other types of assembloids that include spinal-cord tissue could be used to study other autism traits, such as an increased sensitivity to pain, he says.