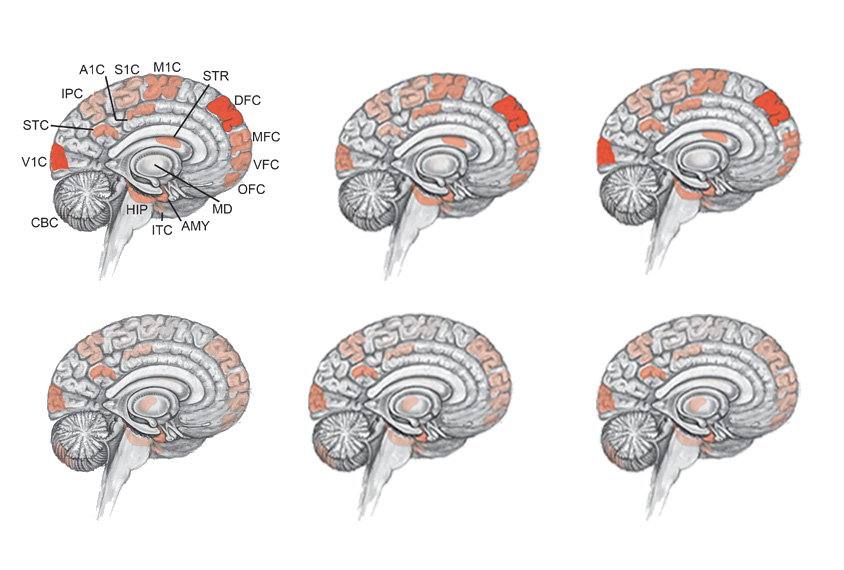 Many of the genes linked to autism are active in the brain’s glial cells, according to a new study of gene expression, and two are active predominantly in glia rather than neurons.

The results hint that some subtypes of autism affect only glia and add to the evidence that these cells play an important role in the condition.

Continuing to think of autism as affecting only neurons is “too simplistic,” says Michael Snyder, professor of genetics at Stanford University in California, who was not involved in the study. “We’re past that.”

“If we’re really going to understand autism, we have to understand all of it,” Snyder says, “so I think this is an important step in that direction.”

Glial cells, which include star-shaped astrocytes and myelin-making oligodendrocytes, have numerous functions: They clean up excess neurotransmitters, defend the brain against infection and guide the development of neurons. The bulk of autism research has focused on neurons, but both genetic studies and lab experiments show that autism-linked mutations affect glia in ways that could contribute to the condition’s characteristics.

“This [work] is opening the door for the scientific community to scrutinize those pathways related to more about non-neuronal cells than neurons,” says Mohammed Uddin, associate professor of human genetics at Mohammed Bin Rashid University in Dubai, who led the new study.

Uddin and his colleagues used data from eight neurotypical brains in the Allen Brain Atlas. They looked at single-cell gene expression within three brain regions: the anterior cingulate cortex, middle temporal gyrus and primary visual cortex. The team used software to group cells in each region based on gene expression; cells with similar expression patterns are likely to be the same type.

For each cluster, which ranged in size from 100 to 3,364 cells, the team identified the genes whose expression looked most similar across cells — a sign that these genes are highly regulated. They then sifted out the top three clusters in each region in which these regulated genes are also ‘highly constrained,’ or not often mutated because such mutations would have a big impact.

They scoured 26 genetic studies to gather 1,087 autism-linked de novo, or non-inherited, mutations that prevent a gene from functioning. The 852 genes they flagged were also the most active in the top three clusters they identified.

What’s more, these same genes are not highly expressed in neurons; rather, they’re more active in glial cells, according to additional human and mouse brain data. The genes are also more active in the fetal brain than in the adult brain. The results were published 21 November in Human Genomics.

“Seeing this is just a wow moment for me, to be honest, and it makes sense,” Uddin says, because of all the crucial functions glia perform in the developing brain. “There is so much more to these cells that we don’t know at this moment.”

Two genes, KANK1 and PLXNB1, were most expressed in astrocytes, which support neurons structurally and manage their levels of neurotransmitters and nutrients.

“It’s really fascinating to have two genes that have such specific expression in glial cells,” says Tomasz Nowakowski, assistant professor of anatomy at the University of California, San Francisco, who was not involved in the new work. “It suggests that there could be a pathway that is either targetable or drug-able that could contribute to autism.”

To understand how these genes really function, researchers need high-resolution, single-cell expression data across the lifespan, from the developing brain to early childhood and adolescence, Nowakowski says. The study is “exciting,” he adds, but also “highlights the unmet needs, the gaps that need to be filled.”

Next, Uddin’s team plans to delete some of these genes in human stem cells and grow them into different glial cells to study the mutations’ effects.