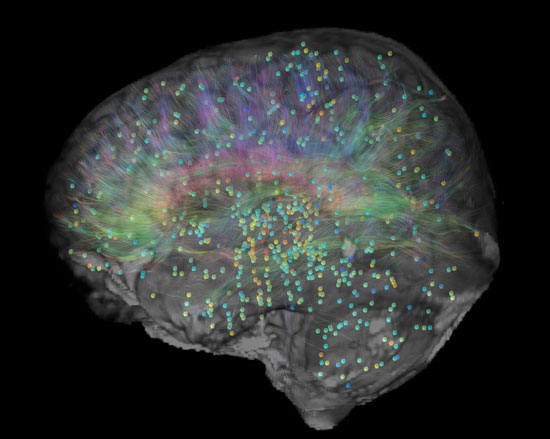 Allen Institute for Brain Science Expressive map: When complete in 2012, the Allen Human Brain Atlas will allow researchers to see where individual genes are expressed in the brain. (Dots in hotter colors represent higher expression of genes, and cooler colors, lower expression).

The Allen Institute for Brain Science has released whole-genome expression data from one-and-a-half adult human brains, and is gathering information from samples at different stages of development, from four weeks after conception to adulthood. The data were described at poster sessions Saturday and Tuesday at the Society for Neuroscience annual meeting in San Diego.

The adult collection, called the Allen Human Brain Atlas, will include ten brains, and is scheduled to be completed by the end of 2012. The developing brain project — which aims to, among other things, sequence the RNA of a smaller set of genes in targeted regions — is expected to finish next year. Like the institute’s well-known Mouse Brain Atlas, the newer resources are freely available to any interested researcher.

By revealing precisely when and where genes are turned on in the brain, these tools could be invaluable to researchers investigating developmental disorders, including autism.

“There are a lot of candidate genes. Do they tend to be expressed at a particular stage of development? Are they mostly cortex-centric? This will allow us to ask those questions,” says Ed Lein, senior director of neuroscience at the Seattle-based non-profit.

The Human Brain Atlas relies on postmortem brains donated by the families of healthy people aged 18 to 68 years. “We have a pretty rigorous screening process for our tissue — we’re trying to go for really clean controls,” says Elaine Shen, research alliance manager at the institute. The project doesn’t use donors who drowned, for instance, because lack of oxygen in the brain can damage RNA.

The atlas includes whole-genome expression patterns from 1,000 structures — from folds and grooves to subcortical areas such as the hippocampus — in each brain. The researchers have designed software to view the data in three dimensions and to easily search for genes of interest. For instance, clicking on the ‘autism’ tag reveals the expression maps of 192 genes associated with the disorder.

The second effort, called the NIMH Transcriptional Atlas of Human Brain Development, is a collaboration between the Allen Institute and six other institutions, and was funded by the federal government’s stimulus package. For one part of the project, researchers are analyzing adult brain tissues for expression patterns of 200 genes linked to autism, schizophrenia, epilepsy and other brain diseases.

The team is also comparing gene expression across development in human, macaque monkey and mouse brains. “It turns out, we’re unequivocally primates,” Lein says, laughing. “There’s much more similarity between macaque and human than [between] human and mouse.”