How oligodendrocytes may shape autism 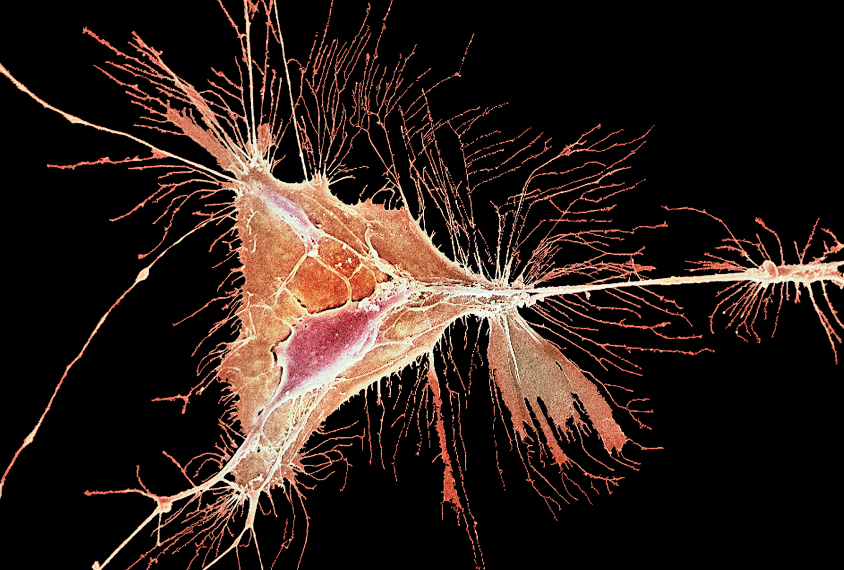 About a decade ago, Carlos Parras started to suspect that autism researchers had overlooked something important — a peculiarly shaped cell called an oligodendrocyte.

Most autism research focused on neurons, the cells that make up the bulk of the brain and exchange signals with one another and the rest of the body. But Parras, a researcher at the Paris Brain Institute in France, had an inkling that oligodendrocytes — support cells that generate the electrical insulation around neurons’ long projections, or axons — deserved greater attention.

He decided to study how CHD8 — the gene most frequently mutated in autistic people — and its cousin, CHD7, specifically affect these cells.

Parras and his colleagues created mice missing either gene only in their oligodendrocytes. The CHD8 mice had intense seizures, not unlike those seen in some people with autism, and they died within a few weeks. The animals’ brains, it seemed, couldn’t regulate electrical activity.

Parras’ work is part of a growing body of evidence showing that genes strongly linked to autism, including CHD8, NLGN3, PTEN and SCN2A, contribute to the development and function of oligodendrocytes — and that these cells may play a larger role in autism than previously thought.

As the findings accumulate, they are upending long-held views about which brain cells are involved in autism, researchers say.

“Many people are shifting from neuron biology to oligodendrocyte dysfunction,” says Keiichi Nakayama, professor of molecular and cellular biology at Kyushu University in Fukuoka, Japan, who published the first behavioral observations of CHD8 mice.

And because oligodendrocytes are masters of plasticity — the brain’s ability to change in response to its environment — understanding these cells could ultimately lead to improved therapies for people with autism, researchers say.

Most neurons form in utero, but oligodendrocytes — like other non-neuronal, or ‘glial,’ cells — develop after birth and continue to form throughout early adulthood.

They make up 5 to 10 percent of the brain’s cells, are found predominantly in ‘white matter,’ and have one key function: to create myelin. This mix of fats and proteins sheaths axons much like rubber insulation on a wire. The coating enables the smooth transfer of electrical signals throughout the brain and gives white matter its characteristic color.

But oligodendrocytes are not static myelin factories. Those located near synapses can respond to neuronal chatter. They can also produce more myelin, or slow down production, in response to environmental factors, including social stimuli.

For example, mouse pups isolated soon after birth have a shortage of myelin in the medial prefrontal cortex, a brain area associated with social activity, according to a 2012 study. They also have little interest in socializing with other animals. And mice missing a gene that regulates myelination show similarly curtailed sociability, even when they are not isolated.

At around the same time as those animal experiments, other teams found that white matter in autistic people tends to differ from that of non-autistic people, and that several autism-linked genes seem to regulate myelination. Taken together, the observations prompted some researchers to explore oligodendrocytes’ role in autism, says Jun Hee Kim, associate professor of cellular and integrative physiology at the University of Texas Health Science Center at San Antonio.

Kim became interested in the cells through SCN2A. The autism-linked gene codes for part of a sodium ion channel expressed in both neurons and oligodendrocytes. In 2017, she says, she was surprised to discover that some immature oligodendrocytes containing these channels generate electrical spikes. What’s more, blocking the channel in the cells leads to a shortage of myelination in the auditory brainstem.

“This would strongly indicate that SCN2A is important for electrical excitability in oligodendrocytes,” she says — which, in turn, may be important for the cells’ ability to communicate with neurons and make myelin.

In the auditory system, for example, cross-talk between oligodendrocytes and neurons may be essential for controlling how the brain processes incoming sounds — a process Kim calls a “black box.” SCN2A might be one key “wire” inside the black box, she says, mediating the creation of myelin needed to transmit auditory information throughout the brain. Kim is investigating whether mice lacking SCN2A have sound-processing difficulties similar to those seen in some people with autism.

“The neuron-glia interaction is one of the key elements for control[ling] this myelin plasticity in autism or in brain development,” Kim says.

Similar patterns have emerged for PTEN, an autism-linked gene that regulates cell division. Autistic people with mutations in PTEN have more white matter than other autistic people and non-autistic people — findings that prompted Charis Eng, chair and director of the Cleveland Clinic’s Genomic Medicine Institute in Ohio, to explore the gene’s connection to oligodendrocyte development and function in mice.

Mice with some PTEN mutations have a thickened corpus callosum — the white matter bundle connecting the brain’s hemispheres — and an excess of ‘precursor’ cells that grow into oligodendrocytes, Eng has found. Those cells also mature unusually quickly and sometimes dump myelin next to axons, rather than encasing them. Whether these structural differences in the brain can contribute to autism-like behaviors is worth investigating, she says.

“Our work and the work of other labs over the past decade justifies increased focus on the effects of glia dysfunction on behavior,” Eng says.

More clues that changes to oligodendrocyte function can affect behavior come from mice missing a copy of CHD8, created in Nakayama’s lab. These animals have a thinner myelin sheath around their axons and larger gaps between myelinated areas than control mice do, according to a study published last year. The gaps seem to slow down electrical signals.

The mice also have autism-like behaviors: They show less interest in a new mouse than controls do, and they interact with a companion mouse less, though they spend more time huddled close to one another. They also spend less time in a well-lit chamber — mice prefer the dark —indicating heightened anxiety levels.

Mice missing CHD8 only in their oligodendrocytes show similar traits, Nakayama and his colleagues have found. The mice also have structural changes in the cortex and striatum and altered functional connectivity in the cortex, hippocampus and amygdala, compared with controls — and the extent of these structural differences reflects their behavioral differences.

“Our conclusion is that CHD8 function in oligodendrocytes is very important for [autism],” Nakayama says. “Oligodendrocyte dysfunction might be the primary cause.”

Mice missing CHD8 throughout their bodies show more autism-like traits, including higher brain volume, than those missing CHD8 only in their oligodendrocytes. But other cells, such as neurons, may be responsible for those differences, Nakayama says.

“It’s a very good demonstration that at least part of the function of this gene related to autism goes through myelination,” Parras says of Nakayama’s work.

Bridge building: Mice with CHD8 mutations only in their oligodendrocytes (right) have less myelination in their corpus callosum than mice without the mutations (left).

Mice with mutations in PTEN, MECP2 or TCF4 also have altered expression of genes involved in oligodendrocyte function, and those same genes show atypical expression in people with autism.

The connection between oligodendrocytes and autism, though still tenuous, holds significant promise, researchers say. If future studies reinforce findings from the past decade, drugs that boost oligodendrocyte function and promote myelination — some of which are being developed for conditions such as multiple sclerosis — could serve as a treatment for some autistic people, Parras says. And because oligodendrocytes develop across so many years, there may be a broad time period in which therapies targeted at the cells are effective.

But first, researchers need to understand the connection more precisely, he says.

“The more we go into the details, the more we realize that those windows of intervention can be deployed in longer periods,” Parras says. “We need to know very well the details to be able to change things.”