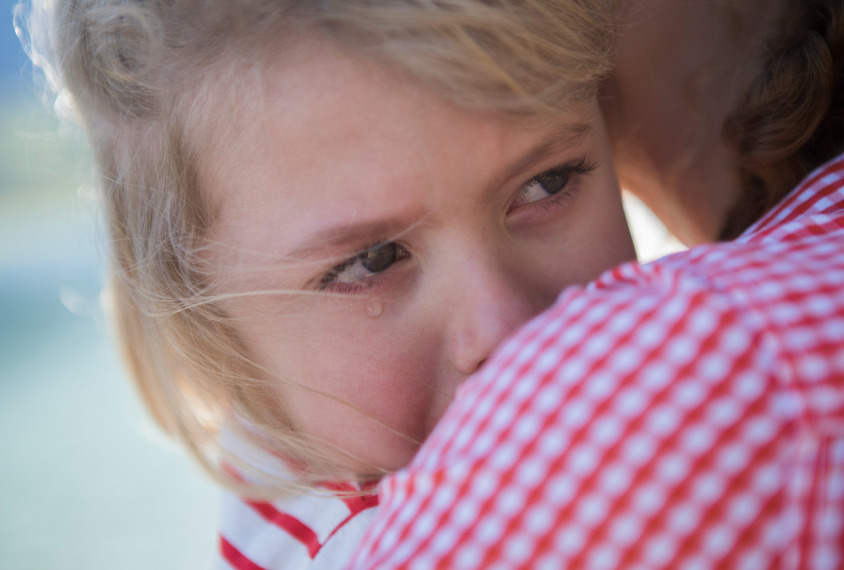 Blues clues: Young autistic girls tend to have behaviors that resemble depression, such as crying excessively.

Autistic children who have behavioral problems tend to have an enlarged right amygdala, a brain region that helps process emotions and detect threats. And in young girls with autism, the region’s size is associated with the severity of these problems.

“I think this is meaningful because they’re only 3,” says lead investigator Christine Wu Nordahl, associate professor of psychiatry and behavioral sciences at the University of California, Davis MIND Institute. “Things like anxiety and depression don’t get diagnosed usually until much later, maybe early adolescence or so.”

Nordahl’s team presented preliminary results from the study at the 2018 annual meeting of the International Society for Autism Research.

Previous studies have linked differences in the amygdala to a wide range of psychiatric conditions, but results in people with autism are mixed, with some reports suggesting they have smaller amygdalae, and some saying they have larger ones.

The new work supports the idea that the amygdala is linked to other psychiatric conditions in autistic people, says John Herrington, assistant professor of child psychiatry and behavioral science at the Children’s Hospital of Philadelphia in Pennsylvania, who was not involved in the research. Herrington previously found that children aged 7 to 17 who have both autism and anxiety have smaller amygdalae than their typical peers.

“What studies like this provide is a much more nuanced explanation of what the amygdala is actually responsible for when it comes to autism,” Herrington says.

Overall, 27 percent of the children with autism have other psychiatric conditions, the team found. And these conditions are significantly more common in girls: 40 percent of girls compared with 22 percent of boys.

“That, I think is the most useful clinical finding,” Nordahl says. Parents of autistic children, especially girls, should be aware that problem behaviors are not necessarily “just part of the autism,” she says, and should be treated separately. “Their child may benefit from these other treatments and improve the quality of their lives.”

The researchers also used magnetic resonance imaging to compare the amygdalae of 226 autistic children with those of 120 typical children of the same ages. Children with autism have significantly larger right amygdalae, on average.

But when the researchers looked at each subgroup, they found larger amygdalae in only the autistic children with high psychopathology and moderate impairment. The results were published in January in the Journal of the American Academy of Child and Adolescent Psychiatry.

“The amygdala enlargement is more associated with psychopathology than [with] autism itself,” Nordahl says. The presence of other behavioral and psychological conditions may explain some of the variability in previous studies of amygdala size in autism, she says.

Girls with a large amygdala tend to have severe internalizing behaviors, such as excessive crying or nightmares, that may signal anxiety or depression. But the same is not true for boys with an enlarged amygdala.

“This is a really interesting result that for me is the most difficult to interpret,” Nordahl says. One possibility, she says, is that in boys the amygdala is involved in ‘externalizing’ behaviors, such as attention deficit hyperactivity disorder and oppositional defiant disorder.

The study adds to evidence that autistic girls are more likely than autistic boys to have depression and anxiety, says Meng-Chuan Lai, assistant professor of psychiatry at the University of Toronto in Ontario, Canada, who was not involved in the new work. “This dataset and cohort is really unique in a way because it’s really talking about these early years.”

Lai also praises the study’s purely data-driven approach to grouping people with autism based on their behavior.

However, Herrington questions whether categories derived from a statistical model are clinically meaningful. A clinician’s assessment might also be a more accurate way to measure children’s behavioral problems than a parent’s report is, he says, “but as a first pass, though, [the study] is wonderful.”

It is unclear how a bigger amygdala might underlie behavioral and psychiatric problems. Why only the right amygdala is enlarged is also a mystery.

Nordahl and her team plan to test and scan the children again at age 6 to see if the groupings are stable over time. They are also conducting a clinical trial of cognitive behavioral therapy to treat anxiety in autistic children aged 8 to 14.