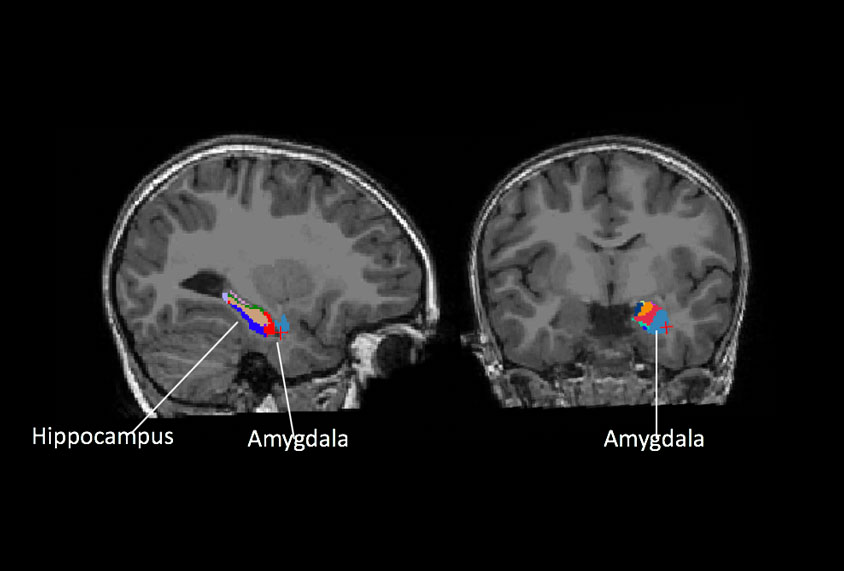 Big emotions: A pea-sized portion of the amygdala is important for social interaction.

A tiny chunk of the brain’s emotion center, the amygdala, is enlarged in some autistic children. And the larger this piece, the more anxious and depressed a child is likely to be.

The same trend also holds in children with attention-deficit hyperactivity disorder (ADHD) and obsessive-compulsive disorder (OCD). These results suggest that enlargement of the amygdala is not unique to autism but cuts across diagnostic boundaries, says lead investigator Emma Duerden, assistant professor of applied psychology at Western University in Ontario, Canada.

Previous studies have found that autistic people and animal models of the condition have an enlarged amygdala. The amygdala comprises five subregions with distinct functions.

Duerden’s team focused on one of these, a pea-sized section called the basolateral nucleus. This area is important for a variety of behaviors involved in social interaction, including communication and eye contact. Problems with these behaviors are among the hallmark traits of autism, but they are also seen in children with other conditions, including ADHD and OCD.

Duerden and her colleagues measured the size of this region in brain scans from 124 children with autism, 69 with ADHD, 45 with OCD and 63 typical controls. The children range in age from 4 to 18 years and are part of a large cohort called the Province of Ontario Neurodevelopmental Disorders Network.

Children with autism, ADHD or OCD tend to have a larger basolateral nucleus than controls do, the researchers found. The study controlled for total brain size, age and sex.

The researchers are building an atlas for the subregions of the amygdala. They are also exploring whether the size of these regions varies by sex.