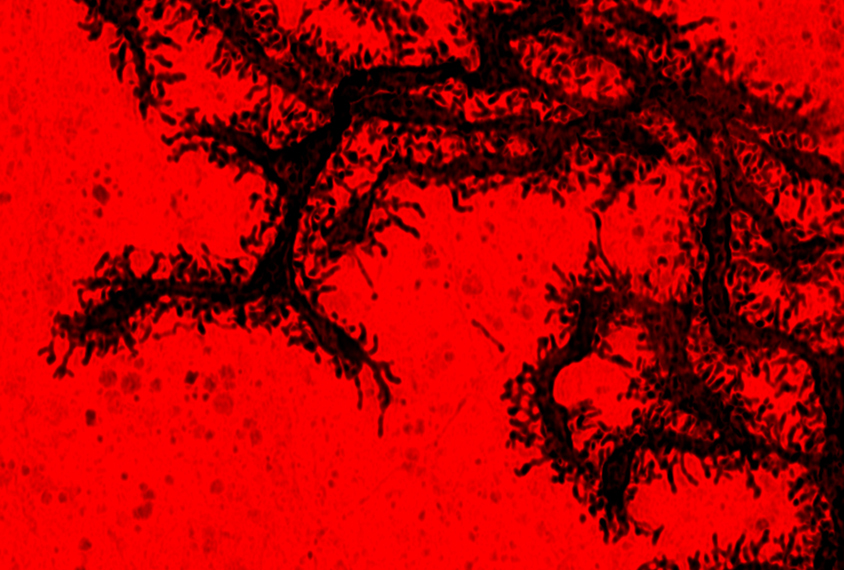 Dropping branches: Neurons in the cerebella of mice missing CNTNAP2 have fewer branches than those in wildtype mice do.

Deleting the autism-linked gene CNTNAP2 from mice leads to distinct cellular and electrical changes in the cerebellum, according to two unpublished studies presented virtually today at the 2021 Society for Neuroscience Global Connectome. (Links to abstracts may work only for registered conference attendees.)

The cerebellum is best known for its role in motor coordination, but scientists increasingly understand it to be involved in a range of other processes including language, cognition and social behaviors. People with a mutated copy of CNTNAP2 often have intellectual disability, sensory issues and autism.

In one study, researchers recorded the activity of Purkinje cells, neurons that send signals out of the cerebellum, in mice missing both copies of CNTNAP2 as the animals received mild electrical shocks to the nerves that control their whiskers.

Their Purkinje cells showed a slower rate of complex spike firing — bursts of high-frequency electrical signals — in response to whisker stimulation than those of wildtype mice did, the researchers found. The cells also showed much more variability in simple spikes — individual high-frequency signals.

The results show that the Purkinje cells were not functioning properly in the CNTNAP2 mouse model, says Marta Fernández, a doctoral student in Olga Peñagarikano’s lab at the University of the Basque Country in Leioa, Spain, who presented the work. “If you have a neuron which is not responding correctly, maybe you are going to find some structural change,” she says.

In another study, the researchers looked for such structural changes in brain slices from the cerebellum. Sure enough, neurons in slices from the CNTNAP2 mice had less complex branching patterns than the controls did.

But the spines — the signal-receiving ends of neurons — in the CNTNAP2 mice were denser, which could help the cells compensate for their reduced complexity, the researchers suggest.

The next step will be to identify which part of the cerebellar network is responsible for the electrophysiological changes seen in the CNTNAP2 mice, says Teresa Sierra-Arregui, a doctoral student in Peñagarikano’s lab, who presented the structural work. This project will involve mice missing the gene only in their Purkinje cells.

Although the coronavirus pandemic has slowed their progress, Fernández says, the team ultimately expects to find that the Purkinje cells are not well connected with other neurons in the cerebellum.

“Because of coronavirus, we had to stop a lot of experiments,” she says.

A previous version of this article incorrectly stated that CNTNAP2 mice have fewer spines than wildtype mice do.