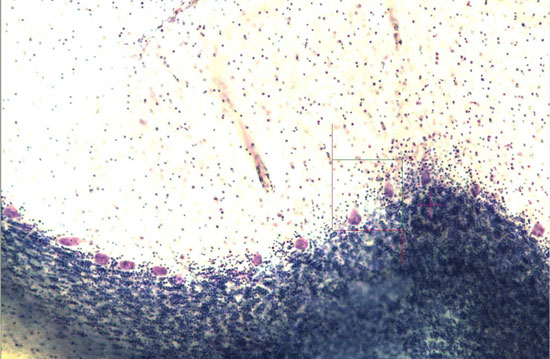 Crus control: In cerebellar areas called Crus I and Crus II, people with autism have about 20 percent fewer Purkinje cells compared with controls.

People with autism have fewer Purkinje cells in a region of the cerebellum that has undergone rapid recent evolution, according to a postmortem study presented Tuesday at the Society for Neuroscience annual meeting.

Researchers led by Margaret Bauman, adjunct associate professor of anatomy and neurobiology at Boston University, measured the density of Purkinje cells in the cerebellum in postmortem brains from eight people with autism and eight controls. Purkinje cells relay information from the cerebellum to the cerebral cortex.

“These are areas that exploded in growth in human evolution,” says Jerry Skefos, a graduate student in the Bauman lab who presented the work. These areas have extensive connections to the prefrontal cortex, an area that has been implicated in autism. However, the functions of Crus I and II themselves are not well known.

“This is a very interesting area — one of the ignored ones,” says Jane Pickett, director of brain resources and data for the Autism Tissue Program, which provided the postmortem brain tissue used in the new study.

Pickett adds that few past studies of autism neuroanatomy have differentiated between specific regions of the cerebellum.

Skefos predicts Crus I and Crus II will be fruitful areas for researchers to plumb in the future. “This area is cram-packed full of neurons, and has incredibly complex circuitry,” he says.