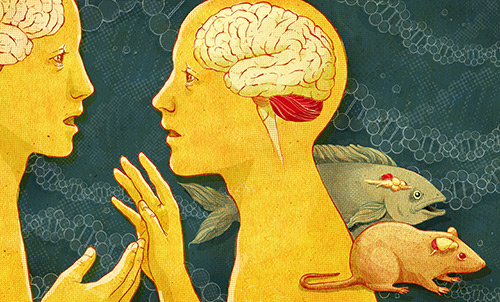 Julia Yellow Family tree: Although the cerebellum is present as far back in evolution as fish and amphibians, it plays an important role in characteristically human features such as language.

Given autism’s influence on complex social interactions and communication, it is not unusual to describe the disorder as uniquely human.

We frequently credit the emergence of certain brain regions, such as the forebrain, with our capacity to make plans and to speak and interpret language.

So it is reasonable to expect that structural and functional abnormalities contributing to autism should be found in these regions, especially in those that evolved the most recently.

From this perspective, the cerebellum — which is in the hindbrain and is found as far back in evolution as fish and amphibians — may seem to be an unlikely source of autism symptoms.

Historically, the cerebellum was known to play a role in motor skills because its injury led to uncoordinated body and limb movements. However, we now know that the cerebellum also plays important roles in cognition, language, emotion regulation and social interactions. Direct evidence of cerebellar abnormalities in autism comes from studies of postmortem brains, brain imaging and single-gene syndromes that display autism, such as tuberous sclerosis. What’s more, injuries to the cerebellum can result in autism-like symptoms.

The oldest evidence of cerebellar dysfunction in autism comes from studies of postmortem brain samples that showed loss of Purkinje cells  — the major outgoing neural pathway that projects to the brainstem and forebrain — in brains from people with autism1. Researchers have repeatedly seen this phenomenon in the majority of autism brains examined to date2, 3.

What’s more, neurochemical studies of the cerebellum strongly suggest that the transmission of inhibitory, or dampening, signals by Purkinje neurons, as well as other local interneurons, is deficient in people with autism4.

One caution when interpreting postmortem brain studies is that the sample size is limited and may be skewed toward more severely affected individuals or those with epilepsy who died suddenly from a severe seizure. To overcome these limitations, researchers have used brain magnetic resonance imaging to explore cerebellar structure and function.

Although findings over several decades have been sometimes controversial and inconsistent, there is now general agreement that some individuals with autism have a smaller central cerebellar region, or vermis, than do controls5, 6. However, other individuals with autism have lateral cerebellar hemispheres that are enlarged, a characteristic that these share with forebrain structures such as the cerebral cortex and amygdala6, 7.

In addition to structural differences, many studies have examined communication between the cerebellum and forebrain. In fact, abnormal functional activation of the cerebellum during cognitive tasks was one of the first hints of deficits in long-range connections in autism6, 8.

Studies using diffusion tensor imaging, which maps the flow of water along the long tracts of neurons, support the concept of long-distance underconnectivity between the cerebellum and the forebrain. These studies show differences in the cerebellar fibers that connect to various brain regions9, 10.

Neuropsychological studies, especially in nonhuman primates, indicate that the cerebellum interacts indirectly with the cerebral cortex through a network called the cerebrocerebellar loop. This loop involves Purkinje neurons, deep cerebellar nuclei, the thalamus, the cortex and the pons, which projects back to the cerebellum.

Just as fine coordinated movements of the limbs depend on integrating sensory and motor systems, the cerebellum regulates other circuits that mediate complex behavioral sequences. It serves to adapt cognitive, learning and emotion systems to current circumstances — for example, by comparing sensory information about ongoing actions with expected outcomes.

As expected, disruption of the human cerebellum, whether structurally (from trauma, a hemorrhage or a tumor), through drugs that cause birth defects or through mutation, can lead to an array of symptoms that include features of autism.

For example, the drug thalidomide, which was given years ago to prevent nausea during pregnancy, is known to damage many parts of the embryo, including the heart, limbs and brain. Of 15 children born to women receiving thalidomide on gestational days 20 to 24 — when the neural tube forms the brainstem and the cerebellum — four developed autism14.

Although the entire nervous system was exposed to the drug, the timing suggests that injury to the hindbrain contributes to autism. What’s more, injury to the cerebellum, whether from surgical removal of a tumor or as a complication of preterm birth, produces nonmotor as well as motor deficits11, 15, 16.

Intriguingly, in a large series of preterm cases, injury to one cerebellar hemisphere may have led to stunted growth of the contralateral cerebral cortex, suggesting that long-range interactions between these two regions influence their respective development.

Significantly, the injuries led in some cases to both autism and cognitive and language dysfunction, which were specifically associated with reduced volumes of the dorsolateral prefrontal cortex and temporal cortex, respectively15, 16.

Using mouse models, researchers have deleted a gene that causes tuberous sclerosis only in Purkinje neurons. Half of children with tuberous sclerosis, which is caused by mutations in TSC1/2 genes, have autism. Deletion of TSC1 in Purkinje neurons leads to neurophysiological disruption and, later, cell death. Significantly, these mice exhibit deficits in social interaction, impaired memory, repetitive behaviors and altered vocalizations, all features of autism17.

We study another gene critical for cerebellar development, ENGRAILED2, which is reproducibly associated with autism18, 19. Mutations in the gene’s regulatory regions lead to increases in expression, which has also been noted in cerebellar samples from postmortem autism brains20, 21.

In mice, ENGRAILED2 regulates proliferation and differentiation of cerebellar granule neurons, the most abundant neurons in the brain22. Mutations influencing this pathway may contribute to some of the altered growth of the cerebellum seen in brain imaging studies of people with autism. However, the gene’s complex expression patterns during much of development make predictions difficult5-7. Interestingly, mice lacking ENGRAILED2 have multiple autism-like symptoms, including deficits in social interaction, fear conditioning, learning and memory deficits, motor deficits and a propensity to have seizures23.

Together, these two different animal models suggest that deficits to the cerebellum may lead to autism. More broadly, studies of cerebellar structure, connectivity and injury also support the theory that this hindbrain region is a critical locus for autism pathogenesis.

Emanuel DiCicco-Bloom is professor of neuroscience at the Robert Wood Johnson Medical School at Rutgers University in Piscataway, New Jersey.