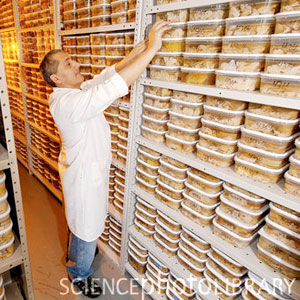 Rare resource: There are massive logistical challenges involved in research using postmortem brains, but the samples can substantially increase the power of studies.

In May, we heard news of a freezer failure at the Harvard Brain Tissue Resource Center, where a significant number of autism brains were stored. This event was yet another reminder of the urgent need to expand the collection of these valuable resources.

The focus in autism genetics has moved from identifying candidate genes to finding associations with common variants through genome-wide association studies (GWAS), identifying duplications and deletions of chromosomal regions, sequencing the coding regions of genes and, finally, to sequencing whole genomes. However, there have not been parallel advances using disease-relevant tissue.

With new technological advances, such as the creation of induced pluripotent stem (iPS) cells, a number of groups are taking the initial steps towards recreating specific cells of interest. However, iPS cell-derived neurons may be limited to revealing differences intrinsic to individual cells. This approach neglects critical questions about connections between neurons, dysfunction in neural circuits, and the interplay between cells of different types.

Gene expression studies in disease-relevant tissue complement traditional genetic studies, but they are also useful for identifying new candidate genes. GWAS approaches have had remarkable success over the past seven years, identifying numerous common variants of small effect. However, the overwhelming majority of these variants do not appear to act through changes to coding sequences, and so are likely to be regulatory, altering the levels, timing or location of gene expression.

Given that approximately 70 percent of variants that alter gene expression are cell-type specific1,2, focusing on brain tissue for autism is warranted. What’s more, combining differential gene expression data and genetic associations can substantially increase the power of research studies3.

Our group has demonstrated that postmortem cardiac tissue can be used to identify biologically relevant differences in gene expression patterns4. We argue that this finding is likely to carry over to other diseases and their associated tissues.

A second line of argument in favor of careful gene expression studies from postmortem tissue stems from the idea that, although many different genetic mutations or environmental susceptibilities may lead to autism, there are likely to be common downstream effectors, or nodes, that we can identify and target with therapies.

For example, although causative mutations for a condition called arrhythmogenic right ventricular cardiomyopathy are found in five separate genes, more than 90 percent of people with the disorder have lower expression of the plakoglobin protein than controls do5. Indeed, relevant nodes may not themselves harbor variants associated with autism, and so researchers might only detect these effectors by looking for altered expression in disease-relevant tissue.

Researchers have for decades discussed and debated major caveats for the use of postmortem tissue, particularly brain tissue. Although autism is one of the most common disorders of brain development, there are massive challenges involved in recruiting, processing and distributing brain tissue from individuals with autism and matched controls.

Working with the Autism Tissue Program, Harvard Brain Tissue Resource Center, and the National Institute of Child Health and Human Development Brain and Tissue Bank for Developmental Disorders, we were able to assemble a collection of brains from 39 individuals with autism and 44 age- and sex-matched controls with tissue from the frontal and parietal cortex. As proof of principle for the usefulness of this tissue, we examined gene expression data from more characterized brain tissue sets6. We looked in particular at eQTLs — genetic variants that are known to affect the expression of other genes — and were able to replicate a significant number of them in the autism tissue set. This attests to the integrity of the RNA obtained from the postmortem autism brains despite the heterogeneity of factors known to influence RNA quality.

This exciting result spurred us to expand our expression studies with more samples from other regions of the brain. One of the most heated debates we have, both among ourselves and with other research groups, is which region of the brain provides the best opportunity to identify downstream effectors associated with autism.

For work on other neurological disorders, such as Parkinson’s disease and Alzheimer’s disease, researchers have made the case that the ideal regions to investigate should be susceptible to disease-relevant processes. But these regions should not be so altered — for example, through overt loss of cells — as to make comparisons with normal tissue overly complex and open to misinterpretation.

Functional imaging studies suggest that the cerebral cortex is, overall, comparable between individuals with autism and controls, but quantitative analysis of a few samples suggests larger differences in cell densities7. We argue that postmortem analysis should continue in the cerebral cortex, but proceed cautiously and diligently to accommodate the potential for fundamental differences that may be present in autism cases.

Lessons from tumor biology have taught us about the vast heterogeneity of cells even within comparable tissue samples. The diversity of cell types represented in a typical brain sample cannot be considered any less complex.

One possibility for studying tissue with diverse cell typesis to isolate individual cells in tissue slices using the precision of laser dissection to obtain specific cell types for study. However, there are major issues with the sensitivity of detection using current methods, and the errors that could be introduced when using multiple rounds of polymerase chain reaction to amplify DNA have not been fully characterized. These issues may compromise any potential gains in single-cell analysis, but are likely to be solved in the future with technological advances.

Instead, we have focused on statistical methods, such as principal component analysis, a method that can account for cell heterogeneity and successfully characterize both brain regions and developmental time points8. Advances in statistical methods that integrate unbiased datasets are also expected to help explore common nodes, even in complex disorders such as autism.

The study of autism presents challenges on every front, from technical issues to the assumptions that must be made to produce data. We believe that postmortem tissue is incredibly important to autism research, and that these samples have not been tapped for their full potential.

In turn, the tissue must be viewed as an irreplaceable commodity and not as testing ground for experimental approaches. Analyzing existing samples using proven ultra-high-throughput approaches promises to help unravel the molecular basis of autism.