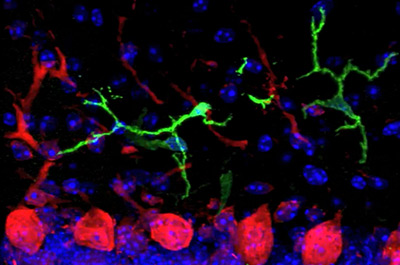 Immune cells that reside in the brain, called microglia, defend the brain against biological threats and injury. Emerging evidence indicates that microglia are altered in some individuals with autism, raising questions about their potential role in brain development.

When challenged, these chameleon-like cells transform from a resting to an activated, or macrophage-like, state and are rapidly recruited to sites of damage. There, they engulf debris as well as unwanted and dying cells. At the same time, they contribute to brain inflammation by releasing immune proteins called cytokines and other proteins that may be toxic to the brain1, 2.

Microglia activation is a hallmark of Alzheimer ’s disease and other adult-onset neurodegenerative diseases. However, several postmortem studies have revealed that activated microglia are also elevated in the brains of young individuals with autism, despite the absence of neurodegeneration or other obvious harm to the brain3.

Intriguingly, a positron emission tomography imaging study published in January — using a radioactive tracer that binds to activated microglia — revealed an elevated number of activated microglia in autism-linked brain regions (including the cerebellum) in people with the disorder. Microglia may thus function as a potential biomarker for at-risk brain regions in autism.

Although the potential link between microglia and autism is intriguing, it is not yet clear what changes in microglia activation tell us about autism. Are microglia simply responding to changes in the brain environment? Or could they play an active or even causal role in autism?

These key questions have been challenging to parse, in part because we know surprisingly little about the normal function of microglia in the brain. How can we understand whether or how microglia contribute to autism if we do not yet understand their normal biology?

A flurry of studies in the healthy mouse brain have revealed novel and unexpected roles for microglia in brain development and the connectivity between neurons4. This new information may provide important insight into the mysterious link between microglia, the immune system and autism.

It was long thought that brain microglia differentiate from peripheral macrophages, immune cells that engulf invaders, that enter the brain after birth. This dogma was recently challenged when a landmark mouse study found that the majority of ‘resident’ microglial cells derive from myeloid-lineage precursorcells in the yolk sac and migrate into the brain very early in embryonic development5.

Microglia are therefore in the right place at the right time to influence a wide range of developmental processes that, if performed incorrectly, could contribute to autism. Indeed, studies published in the past few years implicate microglia in the generation of new neurons6, programmed cell death7, 8 and the development of neuronal junctions, orsynapses9.

In fact, microglia mediate synaptic pruning, a developmental process necessary for formation of precise synaptic circuits, in which inappropriate synaptic connections are eliminated9, 10. In several regions of the postnatal brain, microglia help sculpt developing synaptic circuits by engulfing, or phagocytosing, small bits of axons (the long bodies of neurons) and dendrites (their signal-receiving branches).

Mutations that disrupt microglial phagocytosis during development have a long-term impact on brain connectivity. This suggests that activated phagocytic microglia are necessary for proper synapse development.

Synaptic pruning is likely to be only the tip of the iceberg. Microglia also release an array of growth factors and neuromodulators that may influence brain development. Microglia dysfunction during brain development could, directly or indirectly, contribute to synaptic connectivity defects and the underlying biology of autism.

What is the basis of microglia dysfunction in autism? One possibility is that genetic mutations directly affect microglia development or function. Researchers have studied this in Rett syndrome, a disorder with many features of autism. Rett syndrome is caused by a mutation in MeCP2, and microglia lacking MeCP2 release abnormal levels of neurotransmitters and inhibit the development of neurons11.

MeCP2-deficient microglia also have impaired phagocytosis, which may prevent the clearing away of dying cells and debris in the Rett brain12. Strikingly, many of the classic symptoms of the disorder were arrested in a mouse model of Rett syndrome after a bone marrow transplant that allowed for the infiltration of healthy, normal microglia into the brain.

Other studies provide further compelling evidence that genetic disruptions in microglia can contribute to symptoms relevant to autism — at least in mice. For example, specific mutations in the HOXB8 gene in microglia results in severe obsessive-compulsive-like behaviors in mice13. And defects in the microglia-specific immune-related gene TREM2 cause social inhibition and dementia in Nasu-Hakola disease, a rare disease that leads to bone cysts14.

It is also possible that environmental factors alter microglia function and indirectly influence brain development and synaptic connectivity. Microglia are extremely responsive to inflammatory signals. Environmental conditions that lead to systemic or local inflammation, such as prenatal infection, could have major consequences for how microglia develop and function when the brain is wiring up.

Autism may result from the interaction between certain mutations, such as those in synaptic proteins, and environmental risk factors.

A 2011 study looking at gene expression in the postmortem brains of individuals with autism revealed two sets of co-expressed genes in autism: genes that influence neuronal signaling, and those that code for immune proteins and proteins that function in non-neuronal brain cells, such as microglia15. This suggests that genetic and environmental abnormalities converge in autism.

Consistent with this idea, epidemiological and animal studies suggest that autism is associated with immune system activation and dysfunction16, 17.

Recent advances in tools for imaging and manipulating microglia will be helpful for studying these mysterious immune cells in autism mouse models. Animal studies are likely to uncover candidate mechanisms and pathways, as well as biomarkers of microglial dysfunction that could then be tested in postmortem autism brains.

A better understanding of when and where microglia become dysfunctional in mouse models may provide insight into their function in circuits or brain regions that are relevant to autism, and may ultimately unveil new therapeutic targets.