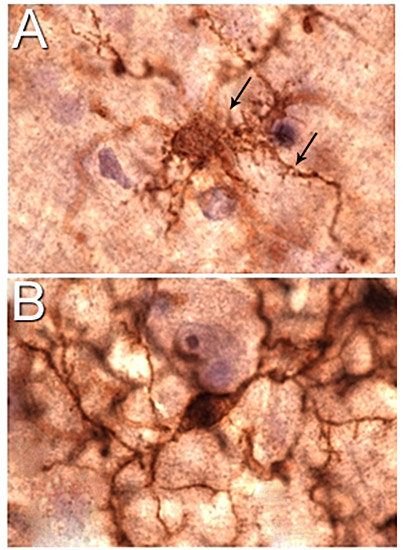 A study of postmortem brain tissue shows that microglia, cells that provide immune defense in the brain, are activated in individuals with autism.

In the study, published in August in Biological Psychiatry, researchers looked at the shape, size and density of microglia in the prefrontal cortex — a brain region linked to autism — from 13 individuals with the disorder and 9 healthy controls.

Of the 13 autism samples, 5 show significant changes in microglia structure that researchers described as “angry,” including a 60 to 80 percent increase in size and density. Another four have minor microglial alterations in a fraction of the cells. Of the nine samples in the control group, only one shows a slight activation of some of the microglia, based on a qualitative standard.

The changes indicate that microglia are activated in the prefrontal cortex of individuals with autism, suggesting that there is inflammation in this region. Other studies have also implicated inflammation and the immune system in the disorder.

Although a history of seizures can cause inflammation in the brain, a statistical comparison between the groups shows that seizures don’t account for the microglial activation in these cases.

The microglia seem particularly activated in the brains of two individuals with autism who were under 6 years of age. The presence of inflammation at such an early age suggests that it may have an effect early on in the development of the disorder. What causes the microglial activation and the effect it has on surrounding nerve cells is unclear, however.

Microglia have also been implicated in Rett syndrome: microglia lacking MeCP2, the protein mutated in those with Rett syndrome, release abnormal levels of neurotransmitters and stunt the development of neurons.