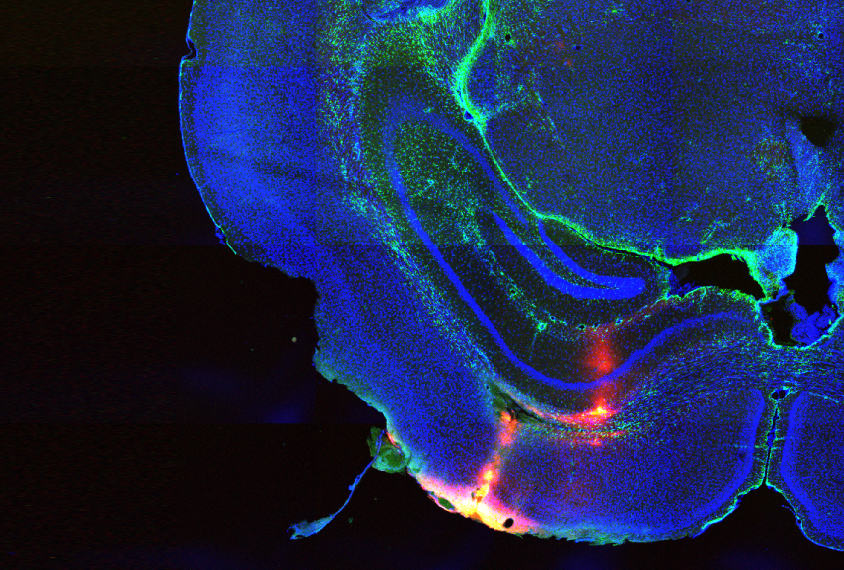 Targeted treatment: An implant (pink/red) delivers a drug directly to the problem area in a mouse brain.

The implant is a 5-millimeter-long pump that researchers load with positively charged molecules or chemical messengers2. Researchers inject the pump into the desired brain region — typically a spot where seizures are thought to originate.

Sending electrical current through the pump creates an electric field that causes charged molecules to flow out of the pump and into the brain. The molecules diffuse only a limited distance in the brain and may result in fewer side effects than epilepsy drugs.

In a test run, researchers loaded the pump with gamma-aminobutyric acid (GABA), a neurotransmitter that curbs brain signals. They implanted it into the hippocampus of unconscious mice.

The researchers plan to test the pump’s ability to operate in mice over months, and using other chemicals, such as potassium or dopamine. GABA may not always be the medication of choice in people with epilepsy, as it worsens the condition in some autistic individuals3.

Ultimately, the researchers say, they would like to automate the pump so that a sensor in the device would detect a seizure and immediately deliver a drug in response.