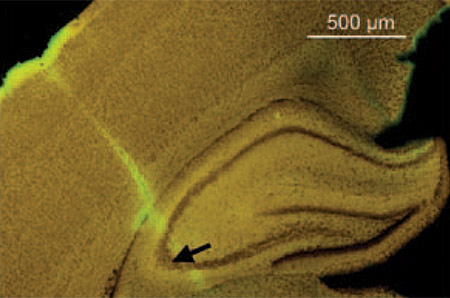 Brain boost: An electrode (arrow) placed in the brain of a rat model of autism shows overactivity in the region that processes memory.

The blood pressure drug bumetanide normalizes a deficit in brain activity in two rodent models of autism, according to a study published last week in Science1. The study hints at a mechanism underlying the drug’s benefits for people with autism.

Neurochlore, a company based in Marseilles, France, is testing bumetanide as a treatment for autism. In the first phase, 27 children with autism showed some improvement in their autism symptoms2; the researchers are continuing the trial in Europe with more participants. (This work is partly funded by the Simons Foundation, SFARI.org’s parent organization.)

In the typical human brain, the chemical messenger gamma-aminobutyric acid (GABA) normally damps down neuronal activity. But in people with autism, one theory holds, GABA functions instead as an excitatory messenger, turning up brain activity and leading to the signal imbalance.

This theory is difficult to test because doing so would require researchers to implant electrodes in human brains. But there is suggestive evidence from a small study that found that the sedative Valium — which enhances GABA activity — makes children with autism more aggressive instead of calming them3. There are also reports that drugs that activate GABA exacerbate epilepsy in some people4.

More generally, several lines of evidence link autism to GABA: Some people with the disorder carry mutations in GABA receptor genes or show differences in neurons that relay inhibitory signals, for example.

Bumetanide may restore the normal balance of brain signals by switching GABA back to an inhibitory role, according to Yehezkel Ben-Ari, director of the Mediterranean Institute of Neurobiology at INSERM in Paris and founder of Neurochlore.

“Many of my colleagues were skeptical,” says Ben-Ari. “But very often such theoretical things turn out to be right.”

In 1989, Ben-Ari and his colleagues showed that in rodents, GABA normally activates brain signals before birth5. Between days 8 and 12 after birth, however, the rodents undergo a permanent switch that makes GABA the primary inhibitory molecule in their brain.

In a follow-up study, published in Science in 2006, the researchers found that GABA also temporarily switches from an excitatory to an inhibitory role at birth and switches back about two days after birth6. Blocking oxytocin, a hormone that rushes through the mother’s system during labor, prevents this temporary switch from occurring.

The findings suggest that oxytocin mediates the temporary GABA switch, perhaps protecting the brain from the onslaught of hormones that occur during birth, says Ben-Ari.

In the new study, he and his colleagues tested their theory in two rodent models of autism: mice that model fragile X syndrome and rats exposed to the epilepsy drug valproate (VPA) in utero, a well-established environmental model of autism.

They found that in these rodents, GABA is an excitatory messenger both before birth and up to 1 month of age. The researchers did not look at longer time periods, but it is possible that GABA remains excitatory indefinitely, says Ben-Ari. They also found that blocking oxytocin in control rats as they give birth blocks the GABA switch in their pups and triggers some autism symptoms.

Another study, published 8 January in the Journal of Neuroscience, found that fragile X model mice make the GABA switch 15 days after birth compared with about 10 in controls7. The difference in timing observed in the two studies may be because Ben-Ari’s team looked at neurons in the hippocampus whereas this study looked at the cortex, says lead investigator Anis Contractor, associate professor of neurobiology at Northwestern University, in Chicago.

Still, finding the same results in two models of autism, one environmental and one genetic, strengthens Ben-Ari’s study, Contractor says. “It speaks to a common mechanism.”

Treating pregnant rodents with bumetanide one day prior to their giving birth normalizes the GABA deficits in the pups. It also prevents the pups’ abnormal vocalizations.

“This points to very strong evidence for deficits in GABA inhibition as a causal relationship with autism, ” says Stephen Moss, professor of neuroscience at Tufts University in Medford, Massachusetts. “[This] is consistent with what a lot of people thought but no one had actually proven.”

The results also suggest that treatments for autism are most effective when given early, says Ben-Ari.

“If we want to understand how to treat autism, we have to work from neurodevelopment and identify the earliest networks that are wrongly connected or wrongly operating,” he says.

“Mechanistically, [the study] points to something that may be really important for autism, but what the actual mechanism is needs to be further understood,” says Moss.