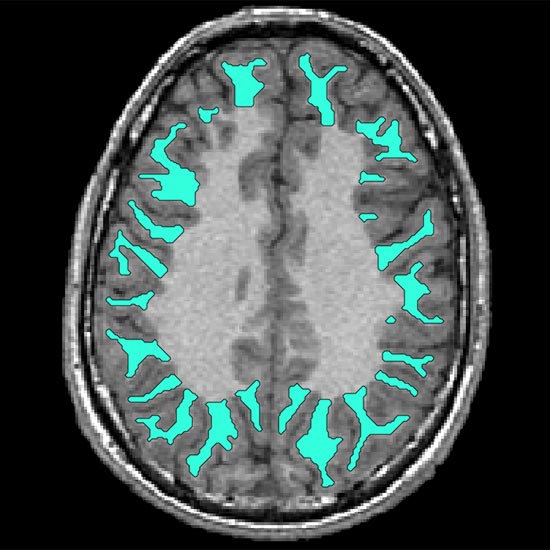 Broken bridges: The conduits (green) that connect the brain’s large central nerve bundle to outer tissue are abnormally narrow in autistic brains, which may dampen communication between distant brain regions.

The brains of people with autism have structural abnormalities that disrupt normal connections between brain regions and impede the flow of information across the brain. That’s the conclusion of a 20-year-old theory supported by several new, independent studies.

The most recent report, published in the June issue of the Journal of Autism and Developmental Disorders, focuses on the corpus callosum — the thick bundle of nerve fibers that bridges the left and right hemispheres of the brain.

Another study, published in the May issue of the journal, found that the gyral window — the conduit for nerve fibers running between the corpus callosum and the cortex — is abnormally narrow in autistic brains2. This smaller passageway could impinge on normal nerve transmission.

“These papers demonstrate that the field is moving from basic volumetric measures of brain regions to more specific measures of the structure and shape of multiple brain regions in our search for abnormalities,” says Antonio Hardan, associate professor of psychiatry at Stanford University’s School of Medicine and lead investigator of the first study.

The new findings bolster the so-called ‘cortical connectivity’ hypothesis of autism, which suggests that the disorder stems from impaired long-range circuits and excessive local connections in the brain.

When Nancy Minshew and colleagues began developing the theory almost two decades ago, it focused on reduced connections to and from the cortex, the large outer layer of brain cells responsible for higher brain functions such as reasoning and memory. Newer evidence shows that autistic brains may have connectivity problems between non-cortical regions as well.

“The connectivity hypothesis is so well established, I don’t think it’s a hypothesis anymore,” says Minshew, a behavioral neurologist at the University of Pittsburgh who collaborated with Hardan on the first study.

Other proponents add that no other theory has been put forth to explain both the pathology and the behavioral attributes of autism.

“There are a million theories about autism; the problem is that 99.9 percent of those only try to explain behavior alone,” says Manuel Casanova, professor of psychiatry at the University of Louisville and lead investigator of the gyral window study.

The cortical connectivity hypothesis, in contrast, could explain why a person with autism could have impaired language acquisition — which requires connections between far-reaching brain regions — as well as enhanced visual acuity, which is localized to one brain region.

Most of the evidence comes from brain imaging, however, which doesn’t directly measure brain structure or neuron signaling patterns. Some autism experts say that more work is needed to better quantify connectivity before putting too much stock in the hypothesis.

“The evidence so far suggests there are problems with cortical connectivity in autism, but the nature of the problem remains a hypothesis to be tested,” says Pat Levitt, director of the Zilkha Neurogenetic Institute at the University of Southern California in Los Angeles.

Behavioral clues have long suggested that autism is a disorder that affects multiple regions of the brain. For example, people with autism don’t typically have sensory deficits, such as blindness or deafness, that stem from one brain region. On the contrary, their complex cognitive and language problems point to abnormalities in regions responsible for integrating sensory information.

In the 1980s, however, no physical evidence could yet prove the idea of distributed brain deficits, Minshew says.

“Twenty years ago, psychologists were looking for a single primary deficit, and assumed it would reside in a single location in the brain, to explain the core features of autism,” she says.

In the next decade, after studies found that head circumference and total brain volume are increased in the brains of people with autism, researchers began to search for widespread defects in connectivity.

In 2002, Casanova conducted a series of imaging studies on postmortem brain tissue that provided the first physical proof that the structural abnormalities could explain observed behavior. The studies showed abnormally narrow and numerous ‘minicolumns’ — stacked groupings of small neurons — in the cortexes of adults with autism5,6.

Usually, the smaller the neuron, the shorter its connections to other cells. So Casanova suggested that the large number of small cells in people with autism would bias the formation of short connections at the expense of longer ones.

“Casanova’s findings were significant because we finally had some pathological evidence of the location of the problems — the cortex,” says Minshew.

In 2004, Just and colleagues found, for example, that the distant cortical areas involved in sentence comprehension are not synchronized in people with autism7.

In 2007, his team found decreased synchronization when people with autism try to perform problem-solving tasks that require both the left and right brain hemispheres8.

Yet researchers must still determine the degree to which impaired connectivity occurs across the heterogeneous autism spectrum. “I think almost certainly that a significant subset of individuals with autism have reduced connectivity,” says Elliott Sherr, a pediatric neurologist at the University of California, San Francisco.

The corpus callosum isn’t the only place where connectivity deficits may occur, nor will anatomic differences alone explain behavior, Sherr notes. Still, “the more we can break down the components of autistic behavior or clinical deficits, the better we can study the underlying biology.”

Structural changes occurring during brain development may also disrupt connectivity, according to a report by Minshew and Hardan published in the June issue of Biological Psychiatry. The team found that over a 30-month period, adolescent boys with autism have more thinning of cortical brain cells than do healthy controls10. This age-related shrinking is more profound in boys with severe autism, suggesting that connectivity is most disrupted in this group, say the researchers.

At least one study, however, challenges the idea that structural abnormalities in autistic brains disrupt normal long-range connections.

Last year, Chantal Kemner found that the integration of auditory and visual information, which requires intact long-range connections, is normal in people with autism11. The study used electroencephalography — a non-invasive technique that measures brain waves through the scalp — because it can measure fast changes in regional activation.

“If there is normal connectivity, there should be no abnormalities in timing of auditory and visual information — and there weren’t,” says Kemner, a developmental psychologist at the Rudolf Magnus Institute in Utrecht, The Netherlands.

Kemner and others caution that more direct evidence of connectivity is needed both to confirm the hypothesis and to find out more about the mechanisms that underlie these abnormal connectivity patterns. For instance, Levitt is using an animal model of autism to obtain electrophysiological measures of local and long-range brain circuits.

Minshew agrees that the research has to get much more specific, to probe how structural abnormalities lead to particular behaviors. “We need to work out the interaction between all brain structures for each function,” she says.

By doing so, she says, scientists can determine whether the disruption of specific neural systems explains the variability seen in autism symptoms. For example, she thinks people with autism who have high anxiety will have more cortical connections to the amygdala, the deep brain region that processes emotion.

The biggest unanswered questions involve the myriad differences among people, in both circuitry and genetics. Fortunately, recent technological advances have accelerated work done in imaging, genetics and other areas of autism research. Minshew expects research to continue at the same pace.