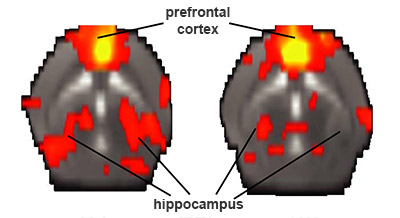 Weak links: Connections between the prefrontal cortex, a brain region involved in social interaction, and several other regions are weaker in mice with a deficit in microglia (right) than in controls (left).

A temporary shortage of microglia — immune cells in the brain that prune unnecessary neural connections — in infancy can have long-lasting effects on brain circuits and behavior, according to a study published in Nature Neuroscience on 2 February1.

“The most important parts of the brain are its connections,” says lead investigator Cornelius Gross, a senior scientist at the European Molecular Biology Laboratory in Monterotondo, Italy. “That’s the way in which all the neurons in there can communicate with each other, and the way you assemble those connections is going to have long-term consequences.”

The study also adds to a growing body of evidence that microglia may be involved in autism.

Sometimes known as the brain’s ‘garbage collectors,’ microglia are immune cells that move around the brain, clearing away dead cells and debris. They are also involved in synaptic pruning, a process in which excess synapses, or neuronal junctions, are eliminated in the course of normal brain development.

Typically, microglia spring into action when the brain is injured or damaged. At this point they transform from a spidery shape into the rounder, more amoeba-like form that characterizes their activated state.

A range of research in the past few years has documented microglial abnormalities in the brains of people with autism, finding, for instance, that they have more activated microglia. The cells are also larger and more densely packed in brains from people with the disorder than in the brains of controls. Researchers have also found that genes related to microglia are overexpressed in autism brains.

In separate studies, scientists have reported that autism brains also show signs of underconnectivity — that is, the links between various brain regions and networks are weaker in people with autism than in controls.

The connectivity story is not simple, however. Late last year researchers also  documented overconnectivity in the brains of some subgroups of people with autism, particularly younger children.

The new study ties these two fields of research together, suggesting how abnormal microglia might lead to altered connectivity.

“I think that the paper is very strong and very, very interesting,” says Jonathan Kipnis, professor of neuroscience at the University of Virginia in Charlottesville, who was not involved in the study. “All these works are coming together to suggest that microglia are not just bystanders in the brain.” Kipnis’ research suggests that microglia may also play a crucial role in Rett syndrome.

Gross’ team studied a strain of mice that lack the CX3CR1 receptor, a protein located on the surface of microglia. This receptor normally interacts with a protein called fractalkine, which neurons secrete when they are forming synapses. Disabling or deleting the gene for CX3CR1 disrupts this communication between neurons and microglia.

In a 2011 study, Gross discovered that mice missing CX3CR1 also have unusually low numbers of microglia during the first few weeks of life and undergo less synaptic pruning than controls do2. Although the mice have normal levels of microglia by adulthood, the early deficit can have long-term consequences, the researchers discovered in the new study.

When two neurons begin to communicate with each other, they typically form a single synapse. Over time, additional synapses form between the two cells, strengthening the link between them. When the researchers examined the adult mutant mice, however, they discovered that the animals lacked this so-called ‘synaptic multiplicity.’

Overall, the mutant mice have a normal number of synapses, but the synapses are distributed more widely than in controls. “They still have those one-to-one-to-one-to-one connections,” Gross says. “They don’t form a specific type of multiple synapse — a double synapse, basically.”

The results suggest that a lack of microglia during development, and the resulting decrease in synaptic pruning, eventually leads to weaker links between neurons in the brain.

“That raises kind of a strange paradox,” Gross says. “We hypothesize then that microglia need to get rid of some synapses in order to strengthen the existing connections.”

Eliminating weak synapses may free up resources that the brain needs in order to build multiple synapses at certain neuronal junctions, Gross adds.

Gross and his colleagues also studied the strength of the links between large brain areas by comparing their patterns of electrical activity. Groups of neurons that fire at the same time in two different areas indicate that the regions are strongly connected.

The researchers implanted electrodes in the rodents’ brains to determine whether neurons in different regions fire in synchrony, a technique similar to electroencephalography. They also looked for signs of coordinated brain activity using functional magnetic resonance imaging.

Both methods revealed that the mutant mice have weak connections between the prefrontal cortex and several other brain regions, including the hippocampus, which plays a role in memory formation, and the nucleus accumbens, an area involved in motivation and reward. Several scientists have reported that people with autism have reduced connectivity between the prefrontal cortex, which is involved in social interaction, and other regions.

The scientists also found that as both youngsters and adults, the mice are less likely to seek out social interaction than controls. Mice with the weakest synchronization between the prefrontal cortex and the hippocampus show the least interest in other mice, the study found. The mice also spend more time grooming themselves than control mice do, which is suggestive of the repetitive behaviors seen in some people with autism.

“I think that is the main strength of the study: really doing it all on a single model and trying to connect up the dots from a single synapse to connectivity to behavior,” says Anna Majewska, associate professor of neurobiology and anatomy at the University of Rochester, who was not involved in the study.

However, it’s not yet clear how the results might translate to autism or to the finding of overly dense, activated microglia found in the brains of people with the disorder.

“I don’t really think anybody has come up with a cellular, synaptic-level explanation for weak connectivity in autism,” Gross says. “We are putting out a hypothesis: that it could happen because you fail to induce this synaptic multiplicity. And microglia seem to be involved in that somehow.”