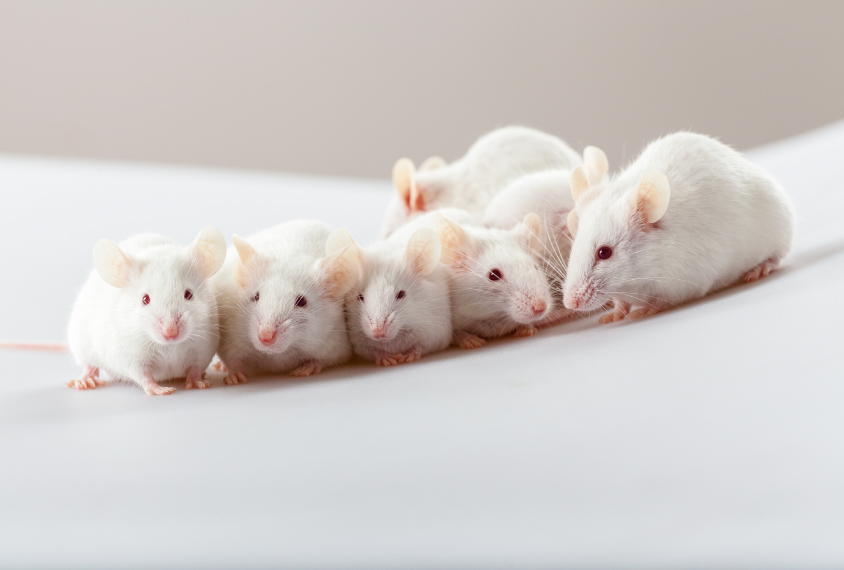 Correcting a mutation in the autism gene SHANK3 in fetal mice lessens some autism-like behaviors after birth, according to a new study1. The work adds to evidence that gene therapy may help some people with SHANK3 mutations.

In people, mutations in SHANK3 can lead to Phelan-McDermid syndrome, a condition that causes developmental delays and often autism. Up to 2 percent of people with autism have a mutation in SHANK32.

“Our findings imply that early genetic correction of SHANK3 has the potential to provide therapeutic benefit for patients,” lead investigator Craig Powell, professor of neurobiology at the University of Alabama at Birmingham, wrote in an email.

A 2016 study showed that correcting mutations in SHANK3 in both young and adult mice can decrease excessive grooming, which is thought to correspond to repetitive behaviors in people with autism.

Last year, Powell and his team also showed that correcting SHANK3 mutations in adult mice eliminates some autism-like behaviors3. But the results were difficult to interpret. The team reversed the mutation using an enzyme called Cre-recombinase that could edit SHANK3 if the animals were given a drug called tamoxifen. Control mice in that study that did not receive tamoxifen but had the gene for Cre still showed behavior changes, raising the possibility that the enzyme affected their brains.

In the new work, Powell’s team used a different approach. They engineered mice with a mutation in both or only one copy of SHANK3 — the latter more closely mirrors what happens in people. Some animals had the Cre gene, but some also had another gene for a Cre-activating protein that is naturally expressed when the animals are in utero. By using this protein, the researchers could avoid using tamoxifen, which some studies have shown may also cause behavioral changes in mice4.

The control mice had either the gene for Cre-recombinase or for the Cre-activating protein, but not both, allowing the researchers to isolate any effects from the method itself.

They found that correcting the mutation lowers some but not all of the animals’ autism-like behaviors, a finding Powell says is surprising. The mice groom less and are more social by some measures, but they still prefer interacting with an object than with another mouse.

“We don’t really know why some behaviors are affected and not others,” Powell says.

Mice with one mutated copy of SHANK3 have fewer behavioral differences than mice with two, they also found, which indicates the value of using both kinds of animals in gene-reversal studies, experts say.

“The fact that they did analyze both side by side, and they did see some differences, I find quite intriguing,” says Gaia Novarino, professor of neuroscience at the Institute of Science and Technology in Klosterneuburg, Austria.

The team originally planned to consider when and where in the brain SHANK3 was corrected. But the Cre-activating protein involved in the study was expressed throughout the brain, preventing region-specific findings.

The team gave some mice the antibiotic doxycycline to suppress Cre expression, in hopes of also testing the effects of correcting SHANK3 in adulthood. But the method failed, for unknown reasons.

“It is also important to publish experiments that do not work out exactly as planned,” Powell says.

The team’s openness about the study’s shortcomings could help others design their own studies or re-evaluate previous work, says Yong-Hui Jiang, chief of medical genetics at Yale University.

“People will learn from the difficulties and the experience,” Jiang says.

It would still be helpful to test whether correcting SHANK3 mutations can reverse autism-like behaviors in adult mice without using tamoxifen, other researchers say.

It’s beneficial “to do experiments in such a way where you leave very little room for alternative interpretations,” says Gavin Rumbaugh, professor of neuroscience at the Scripps Research Institute in Jupiter, Florida. He suggests using a mouse that does not express Cre until the animal is administered doxycycline, rather than trying to suppress Cre with the drug.

The work lends credence to the idea that gene therapy might alleviate some difficulties associated with autism in people with SHANK3 mutations, researchers say. Further studies could also investigate in how many cells the gene needs to be restored to change behavior, and what would be the safest and most effective stage of development to intervene with a gene therapy.

“The impression is you have a quite large window,” Novarino says. “That’s quite positive.”