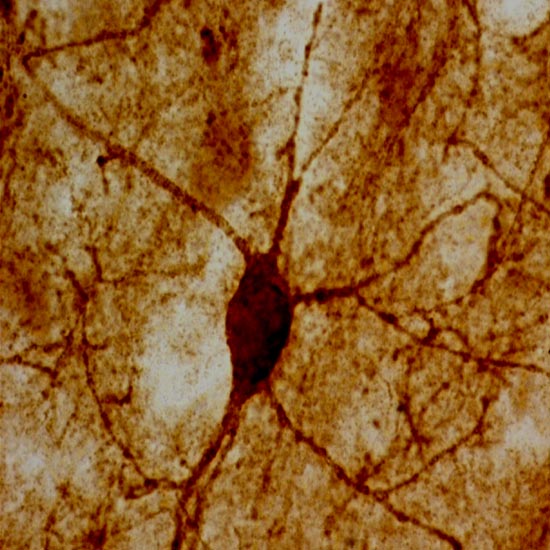 Damp-down cells: Inhibitory interneurons, which quell the electrical storms of the brain, may not work properly in individuals with autism.

Researchers have found a higher density of several types of interneurons — nerve cells that connect sensory and motor neurons in the brain — in postmortem brain tissue from individuals with autism, compared with healthy controls. The findings appear in the February issue of Acta Neurologica Scandinavica1.

This subset of inhibitory interneurons produces a signaling molecule called gamma-aminobutyric acid (GABA), the principal neurotransmitter that slows down nerve activity and prevents over-stimulation in the brain.

Having too many of these interneurons suggests an overabundance of GABA, resulting in too much inhibition of neuronal activity. These results contradict others that have found that autistic brains are overly excitable. For instance, seizures — caused by excessive brain signaling — occur in upwards of one-third of individuals with autism2.

Still, the findings support a more general hypothesis that autism stems from some kind of imbalance of excitatory and inhibitory signaling in the brain.

GABA-producing interneurons come in many varieties, but can be subdivided into three categories depending on which protein binds to them: calbindin, calretinin or parvalbumin.

In postmortem samples from people with autism, Blatt’s team found more of all three types in selective regions of the hippocampus, the region of the brain responsible for memory, compared with tissue from controls. The researchers found more calbindin interneurons in the dentate gyrus, the area in which memories are formed, and more parvalbumin and calretinin interneurons in hippocampal regions packed with pyramidal cells, which are large neurons designed to send and receive signals to many different neurons.

It’s not clear whether these abnormalities cause autism, or result from having the disorder. Still, if the findings are replicated in larger, more diverse populations, they may lead to useful biomarkers of autism, researchers say.

“The best-understood disorders are those in which researchers found the cell type that takes a hit,” notes Anthony LaMantia, professor of cell and molecular physiology at University of North Carolina at Chapel Hill.

In people with Parkinson’s disease, for example, the neurons that produce the neurotransmitter dopamine degenerate or die — providing a clear marker for diagnosis. “We just don’t have that in behavioral disorders of language or social cognition,” LaMantia says.

But if protein levels in the blood, for example, could serve as a marker of interneuron density, that measure could potentially be used to diagnose autism, he says.

About 80 percent of neurons in the cortex are excitatory3. But the minority of inhibitory interneurons may exert more control over hippocampal function. For example, individual GABA-producing interneurons in the hippocampus can powerfully inhibit more than a thousand excitatory pyramidal neurons4.

“Inhibitory cells may be sparse, but they are well-connected and well-situated to play an orchestrating role in the brain,” says Takao Hensch, professor of neurobiology and molecular and cellular biology at Harvard University.

A growing number of studies say these cells may also play a causal role in brain disorders.

In the past decade, for instance, postmortem studies of people with schizophrenia have found lower numbers of parvalbumin interneurons in the prefrontal cortex — the region that controls personality and social behavior — but increases in the anterior cingulate cortex, needed for cognitive functions such as decision-making and empathy5.

These results are inconsistent with Blatt’s study, which found more of these interneurons in individuals with autism. The discrepancies could be explained by the fact that the studies investigated different species during different periods of brain development, the researchers say.

“Our study and Blatt’s simply took snapshots in time,” Hensch says. He plans to study how these cells change over time.

Researchers don’t yet understand why interneuron abnormalities are present in people with psychiatric disorders. It could be because the cells are the brain’s primary source of GABA, which controls the pyramidal cells responsible for high-level cognitive functions.

“If the GABA system is not properly functioning, then the potential exists for GABA levels to potentially affect behavior as well as brain function,” Blatt says.

In 2001, Blatt and his colleagues investigated whether any of the four major neurotransmitters — glutamate, acetylcholine, serotonin and GABA — are altered in the brains of people with autism. They found that, in postmortem tissue from people with autism, the density of the receptors for the first three neurotransmitters is indistinguishable from that of controls. The density of only GABA receptors is much lower in those with autism than in controls, they found7.

Subsequent postmortem studies of autism brains have found lower density of a specific GABA receptor in three different brain regions — the parietal cortex, cerebellum and superior frontal cortex — that have previously been implicated in autism8.

Interneurons are also a likely culprit in autism because they are prone to malfunction during their development. The cells originate in the ventral forebrain, the frontal portion of the embryonic brain, and then migrate outwards to specific regions of the hippocampus.

“Overall, your probability of having something go wrong increases the longer the trip is, and these cells have a long trip,” says LaMantia.

To better understand how interneurons and GABA signaling affect brain development, researchers are manipulating these cells in animal models and observing whether that causes behaviors reminiscent of psychiatric disorders.

For instance, Hensch’s team is trying to directly manipulate parvalbumin cells to generate a mouse model of schizophrenia. He declined to give more details because the work is unpublished.

In January, Kazu Nakazawa and colleagues at the National Institute of Mental Health published details of another mouse model. During these animals’ early postnatal development, the researchers selectively knocked out a key piece of a common glutamate receptor from about half of all interneurons in the cortex and hippocampus.

Although the scientists don’t yet know why, dampening glutamate in this way results in the loss of GABA-producing parvalbumin cells. The mutant animals also show schizophrenia-like behaviors: anxiety and a lack of interest in social activities such as mating and building nests9. Nakazawa says he is also manipulating interneurons to create a mouse model of bipolar disorder.

Animal models offer a way to experimentally pinpoint excitatory or inhibitory circuit defects at various stages of development, and investigate whether they might be treated with drugs, Hensch notes. Most scientists agree that delivering drugs to fix a broken circuit is preferable to relying on drugs only able to treat behavioral symptoms.

“If we can gain a better understanding of which neurotransmitters are abnormal in the autistic brain, and where, it could open up potential drug-based therapies,” Blatt says.