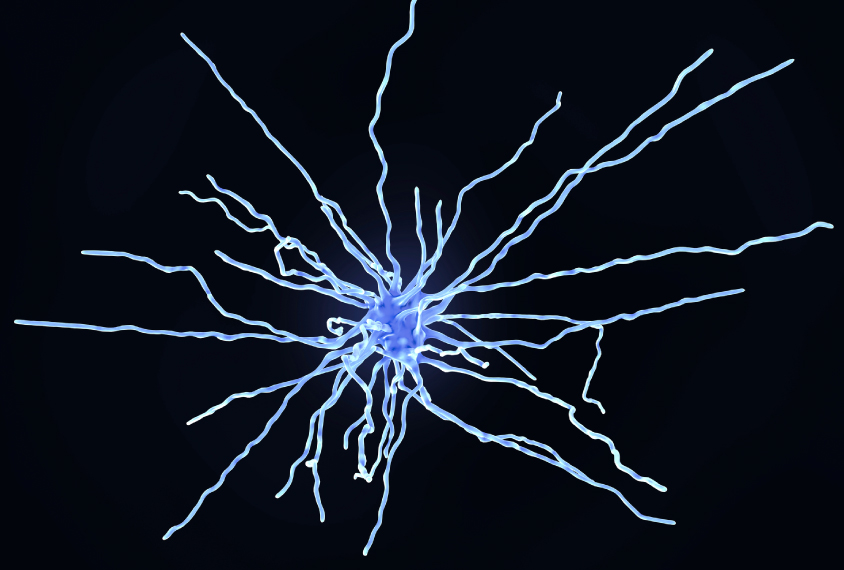 Radiating calm: FMR1 in astrocytes appears to aid in the development of brain circuits that quiet neuronal activity.

Astrocytes play a key role in sensory hypersensitivity in fragile X syndrome, one of the most common genetic causes of autism, suggest data from two unpublished mouse studies presented yesterday at Neuroscience 2022 in San Diego, California.

Both studies involve mice in which researchers turned off FMR1, the gene responsible for fragile X syndrome, shortly after birth in the animals’ astrocytes only. These star-shaped cells are the most common non-neuronal cell type in the brain and have garnered increasing interest from the autism research community over the past decade and a half.

Relatively little research has looked at the role of these cells in sensory hypersensitivity, however, which is common in people with fragile X syndrome and other forms of autism.

FMR1 expression is much lower in astrocytes than it is in neurons, says study leader Anna Dunaevsky, a developmental neuroscientist at the University of Nebraska College of Medicine in Omaha. But it is expressed “at a time early in development when circuits are being formed,” she says, suggesting that even relatively modest expression has an outsized effect on the wiring of the brain.

Dunaevsky and her colleagues showed that mice lacking FMR1 expression in astrocytes are hypersensitive to having their whiskers tickled with a comb made of fine glass filaments. They are also more prone to having seizures when they hear a loud siren than are wildtype mice.

By contrast, mice in which FMR1 functions only in astrocytes and not in other cell types do not have these seizures.

“This was actually our hypothesis,” Dunaevsky says. “We were just really happy to see it.”

In the second study, a separate team in the lab of neuroscientist Iryna Ethell at the University of California, Riverside, also found an altered response to sound in mice that lack FMR1 in astrocytes. When wildtype mice hear a discrete sound, electrical activity across several regions of the brain tends to synchronize in response. But this synchronization does not occur in the mice lacking FMR1 function in astrocytes.

The mice also have a more pronounced brain response to the onset of a sustained sound, and that response does not dampen as the sound continues, as it would in wildtype mice. Abnormal activity of gamma-aminobutyric acid (GABA), a signaling molecule that calms neuronal activity, may account for the sensory hypersensitivity, the team found.

Although the two teams homed in on different mechanisms, “our studies are not contradictory,” Ethell says. There are several mechanisms linking GABA and calcium signaling in the brain. “Both studies point to the contribution of astrocytes to [fragile X syndrome] pathophysiology,” Dunaevsky agrees.

Astrocytes, along with the hippocampus, auditory cortex and frontal cortex, from the FMR1 mice show elevated levels of GABA, compared with wildtype mice. The mice also show a reduction in the expression of parvalbumin — a key marker of inhibitory neurons in the brain — and of several types of GABA receptors. In the auditory cortex, they also have fewer inhibitory synapses. The team outlined the work in a preprint posted to bioRxiv in September.

It’s striking that GABA from astrocytes can trigger all of these biochemical and sensory alterations, says Pablo Trindade, a neuroscientist and self-declared “astrocyte fan” at the Federal University of Rio de Janeiro in Brazil. “This is something new,” says Trindade, who was not involved in either study. But perhaps it shouldn’t be a surprise: “We know that [astrocytes] do way more than people think,” he adds.

Many of the findings from both studies have previously been observed in mice lacking FMR1 altogether, not just in astrocytes. The new results hint at the idea that “astrocytes are contributing to all of the effects we are seeing” related to GABA signaling in fragile X mice, says Victoria Wagner, a graduate student in Ethell’s lab who presented the work.

Together, the two studies suggest that FMR1 in astrocytes aids the development of brain circuits that calm neuronal activity. The results also raise the possibility that treatments that target astrocytes could help ease sensory hypersensitivity in people with fragile X syndrome, the researchers say.