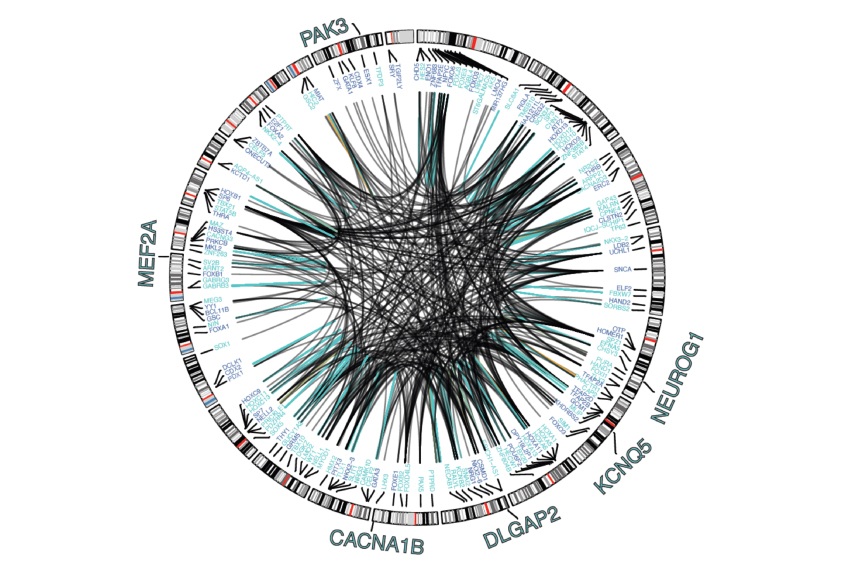 The largest genetic analysis of postmortem brain tissue to date has yielded maps of when and where genes are turned on and off throughout life — and how that expression is altered in autism.

Researchers published their analysis in a trio of papers on Thursday in Science1,2,3.

The studies hail from a collaborative effort called PsychENCODE that launched in 2015 and involves 15 institutions.

The researchers analyzed postmortem brain tissue from more than 2,000 people, including about 50 with autism. They sequenced RNA to determine which genes are expressed in the samples. They also examined patterns of chemical tags on DNA, and on the proteins that it coils around, to pinpoint regions of the genome that control gene expression.

“We use [this] to get new insights into which cell types, time points and biological processes are affected in neuropsychiatric disorders,” says Nenad Sestan, professor of neuroscience at Yale University, who led one of the studies.

Sestan’s study charts the expression of genes in 16 brain regions, from prenatal stages to adulthood. Autism genes are typically most active during mid-fetal development, in excitatory neurons located deep in the cerebral cortex, the brain’s outer layer, the researchers found.

Another study profiles how genes are expressed in the brains of people who have autism, schizophrenia or bipolar disorder. These conditions are distinct from one another in the way RNA is pieced together after a gene is expressed, the researchers report.

A third study cross-references gene-expression data with variations in genetic sequences to tease out the factors that control gene expression in the brain.

“This is an amazing amount of complex information,” says Karoly Mirnics, director of the Munroe-Meyer Institute for Genetics and Rehabilitation at the University of Nebraska in Omaha, who was not involved in any of the studies. “It provides an endless set of data for generating hypotheses that are testable.”

Sestan and his colleagues analyzed gene expression in 60 brains, ranging in age from 5 weeks post-conception to 64 years. The brain samples included various areas of the cerebral cortex as well as deeper regions such as the cerebellum, hippocampus, amygdala and striatum.

For a subset of brains, the researchers analyzed gene expression in single cells from some of the regions. They used these to characterize expression patterns for specific cell types and then to infer how the abundance of each type changes with age.

The team discovered two periods in which gene expression differs starkly across brain regions: from about 5 to 22 weeks post-conception and adolescence.

There are markedly fewer differences around the time of birth — a dip that coincides with a widespread activation of genes that define mature brain cells. Genes involved in neuronal activity and branching, and in the formation of synapses (neuronal junctions), are activated during this period across all brain areas.

The researchers grouped genes with similar expression patterns over time or space into 73 ‘modules’; genes in the same module are presumed to share similar functions.

They cross-referenced the modules with a list of 65 genes strongly linked to autism, plus others with links to intellectual disability or developmental delay. Many of the genes, including TBR1, fall into a module called ME37. Most genes in this module act in excitatory neurons in a deep layer of the cerebral cortex during prenatal development.

“This tells us when and where the underlying pathology may happen,” Sestan says.

In the study comparing autism with other conditions, researchers analyzed postmortem brain tissue from 51 individuals with autism, 559 with schizophrenia, 222 with bipolar disorder and 936 controls. They focused on the prefrontal and temporal cortices, parts of the cerebral cortex that are implicated in all three conditions.

The study builds on a February report on 700 brains by the same team, which found that the three conditions share patterns of gene expression linked to neurons and astrocytes, star-shaped support cells. But unlike the other two conditions, autism involves activation of genes in microglia — the brain’s immune cells.

The new work replicates these patterns in a larger number of brains. And it goes a step further by profiling the expression levels of ‘isoforms’ — alternate sequences of RNA produced from the same gene.

The team found 767 isoforms that are produced at a different level in autism brains than in controls. Of these, about 150 overlap with schizophrenia, but only 2 with bipolar disorder. This overlap is less than that reported in the February study.

“Isoform dysregulation appears to be the hallmark of these three brain disorders as well as revealing the specificity of different disorders,” says Hongjun Song, professor of neuroscience at the University of Pennsylvania in Philadelphia, who was not involved in any of the studies. Researchers should try to figure out what the autism-specific isoforms do, he says.

The researchers grouped the genes and isoforms into 90 modules that show similar patterns of expression across brains. Autism, schizophrenia and bipolar brains share altered expression of genes or isoforms in five of these modules. The genes in three of the modules tend to be unusually active: One module is involved in inflammation and the other two function in excitatory neurons.

Three other modules are robustly altered only in autism brains. One includes a gene called RBFOX1, which controls how other genes are sliced and diced into isoforms. The others contain genes or isoforms involving microglia and an immune molecule called interferon.

“The interferon response is very intriguing to me in autism, because it really seems to peak as early as we have samples, around age 2 or 3,” says Michael Gandal, assistant professor of psychiatry and biobehavioral sciences at the University of California, Los Angeles, who co-led the study. “That suggests to us that [it] may be related to the disease onset.”

The third study presents an atlas of the genome’s regulatory regions, based on an analysis of brain samples from 1,866 adults, including 44 with autism.

To build the atlas, the researchers analyzed data on gene-expression levels in various brain regions and cells, common DNA variants (those found in more than 1 percent of the population), chemical tags on DNA, and DNA-protein complexes, or chromatin. The atlas also incorporates data from public repositories about gene expression.

The researchers then connected enhancers to the genes they target and the proteins that regulate the genes’ expression. They used this information to define networks that control gene expression in specific cell types.

“One of the ideas with this consortium is to generate large amounts of molecular data, and then link it to variants, to get at what the variants are doing,” says lead investigator Mark Gerstein, professor of biomedical informatics at Yale University.

Data from all three of the new studies, along with eight companion studies published in Science, are available via PsychENCODE. The researchers plan to update the repository with new data every six months.