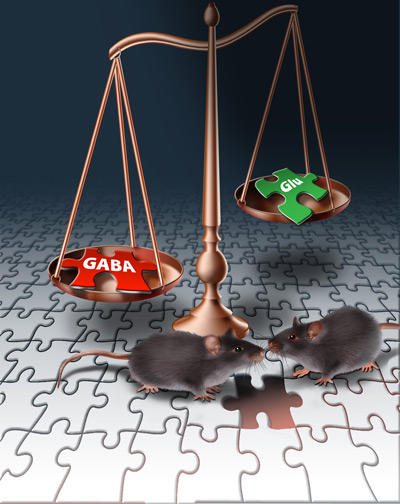 U. Washington Missing piece: The brains of mice that have autism-like behaviors release less of a chemical messenger (GABA) that dampens neuronal activity than one (glutamate) that activates it.

The equivalent of one-tenth of a single pill of the anxiety drug clonazepam alleviates many autism-like behaviors in a mouse model of the disorder, according to a study published 19 March in Neuron1.

These mice have hyperactive brains, the researchers say, and the drug may work by calming brain signals.

The findings support the theory that autism is the result of an imbalance between excitatory and inhibitory signals in the brain. Benzodiazepines — a family of sedatives, including clonazepam, that are used to treat anxiety or epilepsy — may help restore this balance.

Animal models support this theory. For example, a 2012 study found that clonazepam reverses autism-like symptoms in a mouse model of Dravet syndrome. The syndrome is characterized by severe seizures early in life, which lead to intellectual disability and sometimes autism. (About one third of people with autism also have epilepsy.) And mice that model some autism-related disorders, such as Rett syndrome, have a shift in brain signaling due to deficits in calming neurons.

The new study tested this theory in BTBR mice, an inbred strain. BTBR mice show many symptoms of autism, including social deficits, repetitive and compulsive behaviors and unusual vocalizations.

These behaviors probably result from multiple mild mutations in the mice, which is probably akin to the basis for most cases of autism, says lead researcher William Catterall, professor of pharmacology at the University of Washington in Seattle.

Giving the mice the equivalent of just one-tenth of a dose of clonazepam lessens many of these autism-like behaviors. At a higher dose, however, the beneficial effects disappear, Catterall says.

“This explains why, even though people with autism are treated with benzodiazepines, these positive effects, if they exist, were never seen — because nobody gives one tenth of a tablet.”

What’s more, after two weeks of treatment, the mice become tolerant of the standard dose but not the low dose. This buildup of tolerance has been a major challenge in prescribing benzodiazepines to people, says Catterall. “Our optimistic view is that if this works in [people], you could give the low dose chronically and it wouldn’t be a problem.”

Several mouse models of autism have been shown to have too much excitation in the brain or not enough inhibitory signals. Inhibitory signals are typically mediated by the chemical messenger gamma-aminobutyric acid (GABA).

“In several genetic models of autism, a deficit in GABAergic neurotransmission could represent a kind of common final pathway,” says Uwe Rudolph, professor of psychiatry at Harvard University. “Treating autism-related deficits at that stage may be a reasonable strategy.”  Rudolph was not involved in the study but is collaborating with Catterall on follow-up work.

The new study showed that this imbalance is also found in BTBR mice: Neurons in the hippocampus of the mice fire less often, and so release less GABA, than do neurons in control mice. This results in an overall boost of excitatory activity in the brains of BTBR mice.

“The finding that [BTBR mice] also have increased excitatory over inhibitory transmission, just as monogenic mouse lines do, helps to solidify the idea that maybe it’s a general feature of autistic-type behaviors,” says Catterall.

Manipulating this chemical messenger with drugs may be one way to restore the balance — and influence behavior.

For example, DMCM, a compound that inhibits GABA, causes control mice to lose interest in other mice. Clonazepam, in contrast, is known to enhance GABA’s effects. This may explain why BTBR mice treated with the drug become more sociable, less hyperactive and less anxious. Treatment also improves the mice’s memory. Clonazepam has no effect on these behaviors in control mice.

“They looked at a whole host of behaviors, and I think that’s a strength of this paper,” says Takao Hensch, professor of neurology at Harvard University who was not involved in the study.

However, the mechanism by which the drug alleviates autism symptoms is unclear, he notes. Rather than correcting an overall imbalance in brain signals, for example, it may have a more specific effect, such as reducing seizures — something the researchers didn’t measure.

Different mouse models may also show a signaling imbalance at disparate ages, Hensch adds. For example, Rett mice have too many GABA-releasing neurons early in development and too few after the characteristic regression of vocalization and motor skills associated with the syndrome2.

Giving benzodiazepines to young Rett mice may have significantly different effects than it has in adults, notes Hensch.

“We have to be very careful about developmental trajectory,” he says. “We might want to hold off on prescribing benzodiazepines until we know exactly why and how the excitatory-inhibitory balance progresses.”

Catterall, Rudolph and their teams are trying to understand the mechanics of clonazepam’s effect on GABA. Preliminary results suggest that the drug acts preferentially on a certain family of relatively rare GABA receptors in the brain.

This is partially confirmed by the fact that a drug that acts on more abundant GABA receptors has no effect on BTBR mice at low doses. At high doses, the drug actually worsens social deficits.

Pharmaceutical companies are developing drugs that target these different subgroups of GABA receptors, and a few promising ones are in clinical trials. For instance, AZ7325, developed by Astro-Zeneca, enhances GABA activity through the rare receptors3 and is being tested in adults with autism.

Meanwhile, Catterall plans to test low-dose clonazepam in people with autism. “I think we’re all looking forward to clinical trials, ones that are designed with more of an understanding of what we’re finding in the animal model,” he says, “so that the trial can have the very best chance for success.”