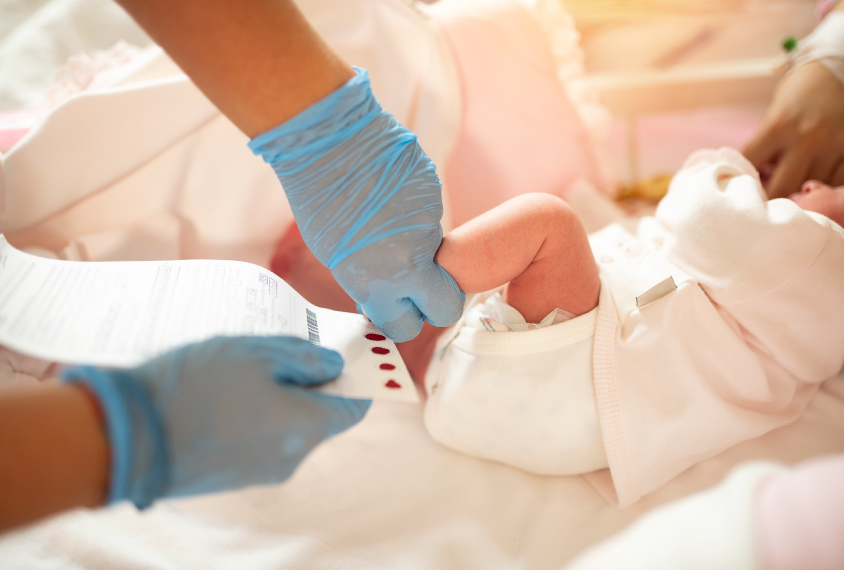 On defense: The way a baby’s immune system responds to changes in utero may influence her odds of having autism.

Newborns with above- or below-average levels of C-reactive protein in their blood are more likely to be autistic than their peers, according to a new study1. The babies’ odds of having autism also vary depending on how their immune system interacts with environmental factors, such as their mothers’ iron levels during pregnancy.

High levels of C-reactive protein might indicate an overly robust immune system, whereas low levels might indicate a relatively weak ability to fend off pathogens — either of which could boost the odds of autism in some children, says lead investigator Renee Gardner, a researcher at the Karolinska Institutet in Stockholm, Sweden.

The findings complicate a large body of evidence suggesting that increased inflammation, as part of an immune response in a pregnant woman or her child, raises the child’s likelihood of having autism, the investigators and other researchers say.

“They are supporting [the theory of] maternal inflammation, but at the same time they reveal a very complex picture,” says Lior Brimberg, assistant professor of neuroimmunology at the Feinstein Institute for Medical Research in Manhasset, New York, who was not involved in the research.

Past observational studies suggest that having an infection during pregnancy can significantly increase the odds of having an autistic child, as can giving birth during the cold-weather months, when cases of influenza rise. And stimulating the immune system of pregnant mice or monkeys can disrupt brain development in their babies.

But the new findings demonstrate that these exposures don’t occur in a vacuum, suggesting that the strength of an infant’s immune system can mediate how infections or other environmental threats influence her likelihood of having autism, Gardner says.

“The answer just seems to be more complex than what would be predicted,” she says.

The relationship between the immune system and brain development is particularly important for researchers to examine given the current coronavirus pandemic, says David Amaral, distinguished professor of psychiatry and behavioral sciences at the University of California, Davis MIND Institute, who was not involved in the work. Short-term spikes in autism diagnoses have been linked to past disease outbreaks, such as the 1960s Rubella epidemic in the United States2.

“It’s not clear what’s going to happen [with COVID-19],” Amaral says. “I don’t want to frighten women who may be pregnant and be worried, but scientifically it’s an issue that we have to deal with.”

To protect the body from pathogens, the immune system produces short-lived proteins called cytokines that can alert immune cells to attack invaders. Some cytokines also stimulate the production of C-reactive protein and other ‘acute-phase proteins,’ which tend to stay in the blood longer, making them a more reliable marker of past strong immune responses.

Using a Swedish birth registry, the researchers analyzed the levels of nine acute-phase proteins in dried blood spots taken three to five days after birth from 924 people with autism and 1,092 non-autistic people.

They also mined the birth records for data on factors associated with autism, including a mother’s age, socioeconomic status, psychiatric history and infection-related hospitalizations during pregnancy, as well as the child’s birth order and gestational age and size at birth.

On average, autistic children had higher levels of eight of the nine proteins than controls, the study found. And the odds of having autism were most strongly associated with levels of C-reactive protein: Infants with both higher and lower levels of it were more likely to have autism than their peers — a finding Gardner calls “unanticipated.” Among the infants with atypical levels of C-reactive protein, those with higher levels were more likely to have autism than those with lower levels.

The findings were published in Biological Psychiatry in September.

Autistic newborns whose mothers had been hospitalized for infections during late pregnancy had lower levels of most of the proteins than the other autistic babies. This pattern of protein levels was reversed among children without autism, suggesting that babies whose immune systems respond robustly to serious infections are less likely to be autistic.

Children whose mothers had anemia had a lower chance of being autistic if they had high levels of ferritin, a protein that helps the body ‘hide’ the iron that pathogens need to survive. The finding helps link a mother’s nutrition to the immune system and autism, Gardner says.

“It’s pulling in this whole other area,” she says.

They saw no connection between maternal body mass index and acute-phase proteins in children, undermining theories that inflammation explains the association between obesity during pregnancy and a child’s odds of having autism, Gardner says.

Gardner and her team also compared autistic children with 203 of their unaffected siblings and saw the opposite of what they observed in unrelated controls: On average, levels of six of the nine proteins were higher in the non-autistic siblings than in the children with autism.

The finding suggests that a strong immune response may help to counteract underlying vulnerabilities to autism — whether genetic or an environmental exposure in utero — that tend to be shared among siblings, the researchers say.

“That would actually really fly in the face of this whole immune activation hypothesis, where we think that inflammation is bad bad bad bad bad,” Gardner says.

Both the large size of the study and its use of the babies’ blood spots strengthen the findings, other researchers say. Much previous work has focused on immune markers in the mother or in older children.

If certain levels of acute-phase proteins or similar markers are found to be specific to autism, testing blood for such markers could be used as an early indicator of the condition, Amaral says. Blood spots are collected from nearly all babies in many countries around the globe.

“People are struggling to try and find early markers of risk for autism,” Amaral says. “If there could be indications in the blood spots which are routinely taken at or near birth, it would be a major boon.”

Gardner and her team are currently analyzing blood samples from some of the mothers in this cohort, as well as examining other markers in the babies’ blood, such as anti-gluten antibodies, to further understand the relationship between immunity, autism and factors such as nutrition.