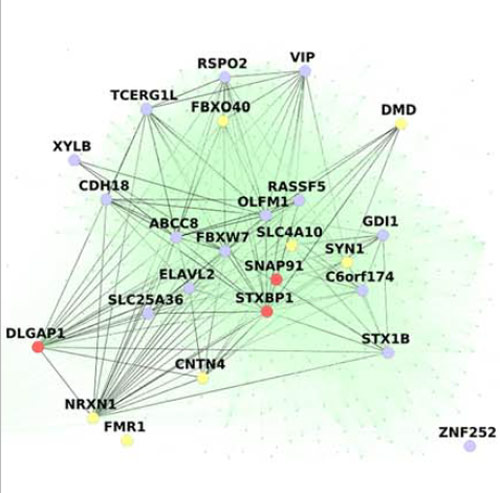 Researchers have mapped networks of genes expressed at the same time and place in the brain and shown that rare and common autism-linked mutations are likely to function in the same pathways. The results were published 8 March in PLoS Genetics1.

Previous studies have associated a large number of genetic variants with autism, ranging from common variants that are present in the general population to rare mutations, which are more likely to be harmful. These rare variants tend to be associated with other neuropsychiatric disorders, however, suggesting that they are not sufficient to lead to autism.

In the new study, researchers looked for associations between gene variants linked with autism by first mapping networks of genes that are likely to function in the same pathways in the brain. They did this using data from the Allen Brain Atlas, a resource that charts patterns of gene expression across the developing brain.

The researchers then compared a number of rare and common autism-associated gene variants to the networks. These included 121 rare autism variants listed in SFARI Gene, a comprehensive collection of information on genes associated with autism, and common variants derived from gene association studies using the Autism Genetic Resource Exchange, the Autism Genome Project and the Simons Simplex Collection databases.

Three of the gene networks identified include a large proportion of genes unique to neurons, as opposed to other brain cell types, such as astrocytes. The autism-associated variants are more likely to overlap with genes in two of these networks than with those in the other gene modules, the study found.

In one of the two networks, the primary functions of the ‘hub’ genes, or those that make the most connections, are the generation of new neurons and synaptic plasticity, a process that underlies learning and memory. The hub genes are also expressed in brain regions responsible for learning and memory, such as the hippocampus.

The most connected genes in the other neuronal network associated with autism are involved in the transmission of signals across synapses, the junctions between neurons, and are expressed in brain regions involved in sensory processing. These include FMR1, NRXN1 and CNTN4.

Both rare and common autism-linked variants mapped to the same networks and are more likely to be found together than in separate groups, the study also found. This suggests that they may combine in the same pathway to lead to autism.